Turkey's leading charity Red Crescent is set to open its first office in Senegal's Dakar. Red Crescent President Kerem Kınık told Anadolu Agency (AA) Friday that they would sign a cooperation agreement with the Senegalese Red Cross, and the agreement would pave the way for the opening the charity's first humanitarian mission in African country. He said the office will be a base for Red Crescent's activities in Senegal and Sahel countries. 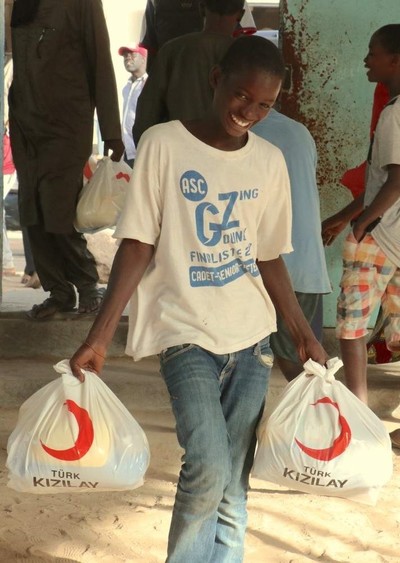 A Senegalese boy carries humanitarian aid delivered by the Turkish Red Crescent in Dakar in this undated photo. (AA Photo)

"We aim to help national associations in the region and boost their capacity in handling a series of issues such as response to drought, a frequent occasion in the region, hunger crisis and displacement stemming from conflicts," Kınık said. He noted that they will simultaneously open another office in Addis Ababa, Ethiopia, adding that they already had country offices in Sudan, South Sudan and Somalia. Senegalese Interior Minister M. Aly Ngouille Ndiaye who met Kınık Friday said Turkey and Senegal have strong relations and that they were aware of Red Crescent's role in responding to several crises in the region. Ndiaye pledged support for the charity's work.