Coronavirus: Evacuation set to begin for Turkish citizens in China 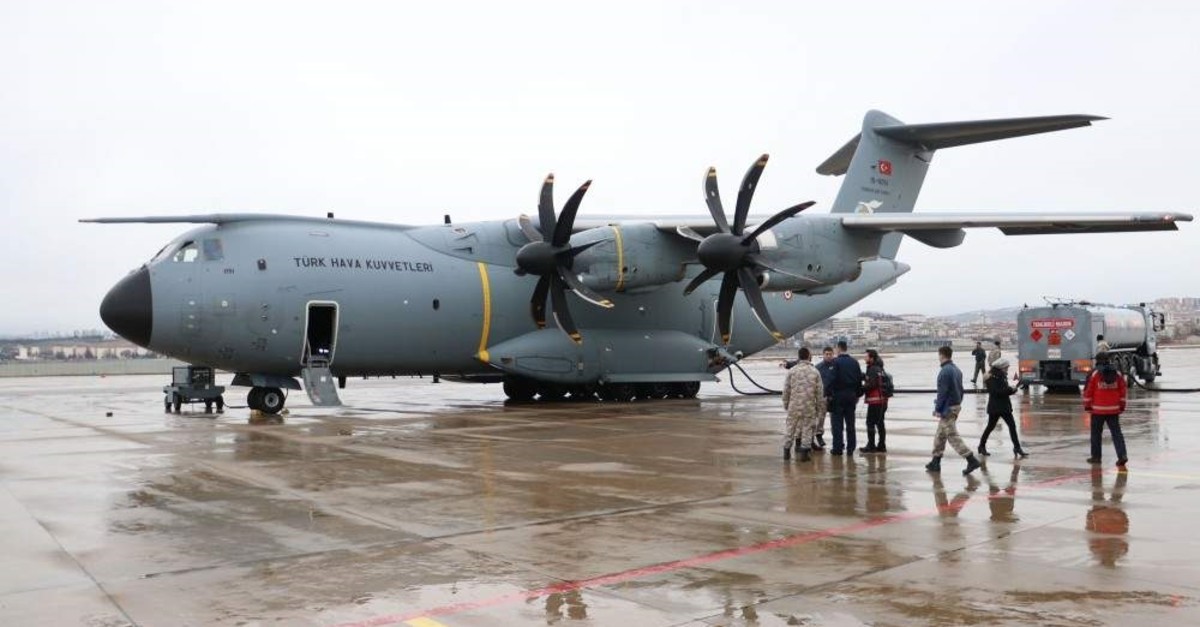 Turkish authorities wrapped up preparations for an evacuation operation for Turkish citizens in China's Wuhan, the epicenter of the coronavirus outbreak. An A400M military cargo plane converted into an air ambulance was scheduled to leave for China Thursday to bring 34 Turkish citizens home. The plane will also fly seven Azerbaijanis, seven Georgians and one Albanian national to Turkey.

The plane, coordinated by Turkey's Health Ministry, was expected to take off Thursday from Etimesgut military airfield in the capital Ankara. The Turkish Cooperation and Coordination Agency (TİKA) also loaded medical equipment into the plane, including 1,000 biohazard suits, 93,500 face masks with protective filters and 1,000 single-use protective clothes, to deliver to China for assistance in fighting the outbreak.

The evacuees will be required to sign a declaration indicating that they are healthy before boarding the plane while Turkish doctors will examine the evacuees before they board the aircraft.

Meanwhile, the country's flagship carrier Turkish Airlines (THY) announced a reduction in flights in the upcoming days between Turkey and China's Beijing, Guangzhou, Shanghai and Xian, "due to significant decline in demand." THY media adviser Yahya Üstün said in a statement Thursday that the number of planned flights to and from Chinese cities will decrease from Feb. 5 to Feb. 29. According to Turkish Health Minister Fahrettin Koca, the decision for evacuation came after the citizens contacted the Foreign Ministry and requested assistance to leave the city, which was placed under lockdown by Chinese authorities. "We do not want any of our citizens abroad to risk infection. We are in close contact with the World Health Organization (WHO). We also took all the necessary steps for permission. With Chinese authorities' approval, we hope to bring our citizens home within the next 24 hours," he said Wednesday. Koca said Turkey was also increasing precautions as more and more countries confirmed patients infected with the virus. Koca said a special crisis center was established to respond to any potential outbreak. The minister also said the number of thermal cameras at Istanbul Airport was increased to effectively screen passengers arriving from China, adding that the cameras have not detected anyone with the virus so far.

Some Turkish nationals who were visiting Chinese cities other than Wuhan or residents there already started returning home, rescheduling their trips due to coronavirus concerns.

Erdal Çevik, a businessman who was in Tianjin and returned to Istanbul, said he was supposed to stay longer but had to make "an emergency return" because of the coronavirus outbreak. "We were worried. We did not leave our hotel for a week," he told Demirören News Agency (DHA) Thursday.

Five passenger planes arrived in Istanbul from Beijing, Xian, Guanghzou and Shanghai Thursday with the majority of passengers Chinese tourists. Çevik said Tianjin was "like a ghost city with no one outside." "Everyone is wearing a mask. Subway stations were completely quiet," he said, giving an account of daily life in the city.

Afet Gümüşel, who went to Beijing two months ago to visit her son and daughter-in-law, said that they never left the house due to fear of the outbreak. Gümüşel said she had to return as her visa expired, but her son and his family may return too in the coming days. "We used to go out quite often, but it all changed in one week. I have been regularly visiting Beijing for the past 10 years and I never saw it as quiet as it is now," she said.

Abdülkadir Değirmenci, who was in Beijing for trade, said he faced strict health inspections as he traveled to China with a connecting flight from Wuhan to Beijing. "People are very anxious, and they never go out. I was supposed to return two days later, but I decided to leave earlier. I wanted to return earlier, but there weren't any seats and I couldn't reschedule my tickets," Değirmenci said, adding that he could not leave his hotel for one week.