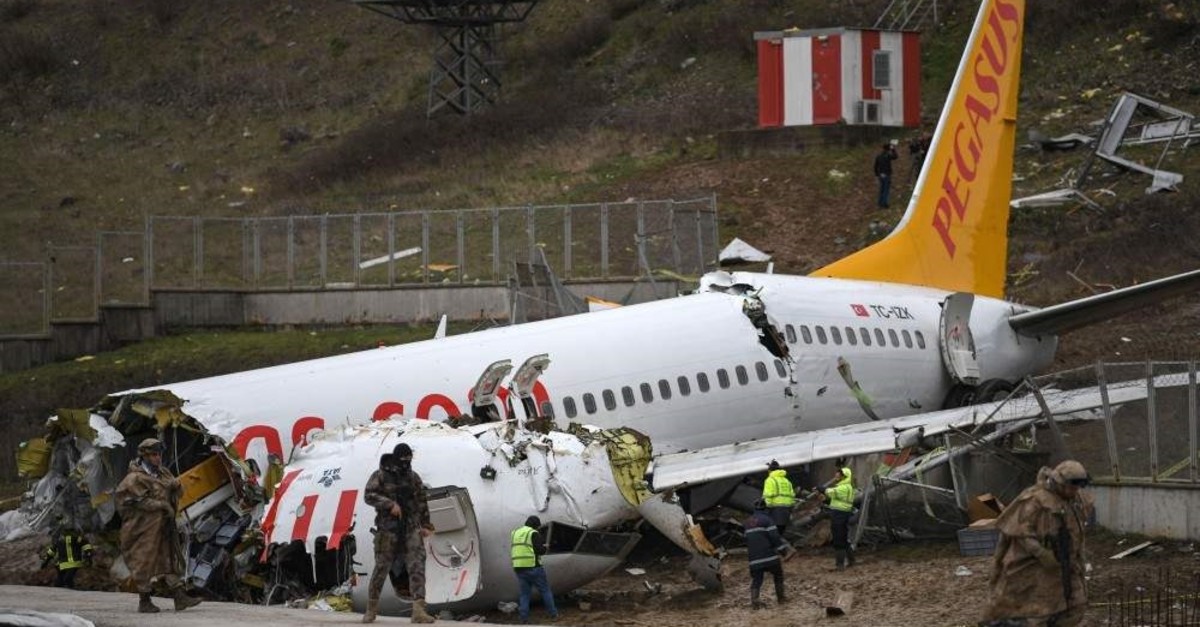 Authorities said three people were killed in the accident in Istanbul on Wednesday. Marking the second runway accident by Pegasus Airlines in less than a month, the crash landing raised questions about the airline's security protocols and regulations

Flights resumed at Istanbul's Sabiha Gökçen Airport on Thursday after a 10-hour pause following the crash landing of a Pegasus Airline jet, while authorities said the death toll in the accident increased to three.

On Wednesday evening, a Boeing 737 operated by low-cost Pegasus Airlines landed at Sabiha Gökçen Airport during strong winds and heavy rain and overshot the runway. It skidded about 60 meters before dropping into a ditch from a height of around 30 meters, breaking into three parts as it came to a rest.

The aircraft was 11 years old and had 177 passengers and six crew members on board. Istanbul Gov. Ali Yerlikaya on Thursday said all 180 injured were in stable condition and four people had serious injuries. The governor also said an investigation was launched into the accident.

The accident came less than a month after another Pegasus Airlines plane skidded off the runway at the same airport in Istanbul on Jan. 7, causing the temporary closure of the airport. There were no injuries.

In January 2018, another Boeing 737 in the Pegasus fleet slid off a runway at Trabzon Airport in northeastern Turkey. The plane came to rest in the dirt above the Black Sea with its nose pointed toward the water. No one was injured.

With three of the airline's planes skidding off the runway, two of them within a month, it didn't take long before questions arose about security and flight protocols at Pegasus Airlines. While officials at the Transportation Safety and Inspection Center (UEİM) said it would be at least a month before a preliminary report would be ready, the news that two flights before the Pegasus aircraft decided to go around, or abort the landing, left people wondering whether the airline was pressuring pilots to take riskier approaches to avoid costly delays and redirections.

According to voice recordings between the air traffic control (ATC) tower and the pilots, the controller warned the pilots about strong winds during the approach, saying that the designated runway for landing could change due to weather conditions. The controller also told the Pegasus pilots that several aircraft before them declared missed approaches and decided to initiate a go-around, a procedure in which the pilot decides against landing due to risks and takes the aircraft to a higher altitude for another attempt.

Appearing in front of press members with teary eyes, an emotionally charged Pegasus Airlines General Manager Mehmet Tevfik Nane denied claims of any pressure on their pilots. "It's not easy to be here. It's hard to speak especially when people have lost their lives or have been injured," he said.

Offering his condolences to the families of victims, Nane said the airline was in full cooperation with the authorities. "I know you have tens, tons of questions as to how this accident happened. Right now the investigation by the Transportation Ministry is underway. It began at 2 a.m. yesterday (Thursday) after the black boxes were retrieved," Nane said.

"Our annual safety record is above European Union standards. All our pilots are being constantly encouraged not to take any risks, to go around if they deem it risky or land in alternative airports if necessary. All our procedures are reviewed by civil aviation authorities each year. Our planes are 5.3 years old on average and technically solid. All of their maintenance is done in accordance with regulations. These sorts of accidents result from a combination of many factors. We vow to make any required improvements after the investigation has concluded," he said.

Experts from Boeing were already on their way to take part in the investigation, as they are usually involved in any crashes of aircraft made by Boeing regardless of where the accident happens.

Engin Demir, who was injured in the crash, told NTV television that he really noticed the speed as the aircraft landed. "With the speed, I think it was not able to stop. It all happened in 2-3 seconds," Demir said from his hospital bed.

Demir said he was trapped for a while by plane debris falling from the luggage compartment. "There were screams and shouts. I tried to calm people around me. Help soon arrived," he said.

Another survivor, Alper Kulu, told the DHA news agency the flight was "abnormal from the start to the finish."

"It was a very turbulent flight. The plane touched down with difficulty. It was very speedy compared to other flights," he said, adding that the plane suddenly swayed left and right, then dipped to the left to fall into the steep ditch.

He said the impact flipped the seats in front of him completely around, forcing him to press to get out since he feared the plane could explode.

“There was panic and shouting. Everyone was calling for help. I got out of the plane on my own, with a broken arm. I (climbed) 30-40 meters. I heard announcements that the plane could explode,” he said.

While speculations ran amok as to whether the pilots took any unnecessary risks or whether the plane was coming in too fast, experts also urged the public not to draw any conclusions yet, saying there could be many things that could have gone wrong and the full picture would not be revealed before a thorough investigation.

Speaking to Daily Sabah on the condition of anonymity, a commercial airline pilot who flew on the same day said the winds in Istanbul were strong and unpredictable, as they constantly changed direction. The pilot said while the winds might have played a role in the crash, there could have been several different factors at play that led to the deadly accident, and it was too soon to draw any conclusions.