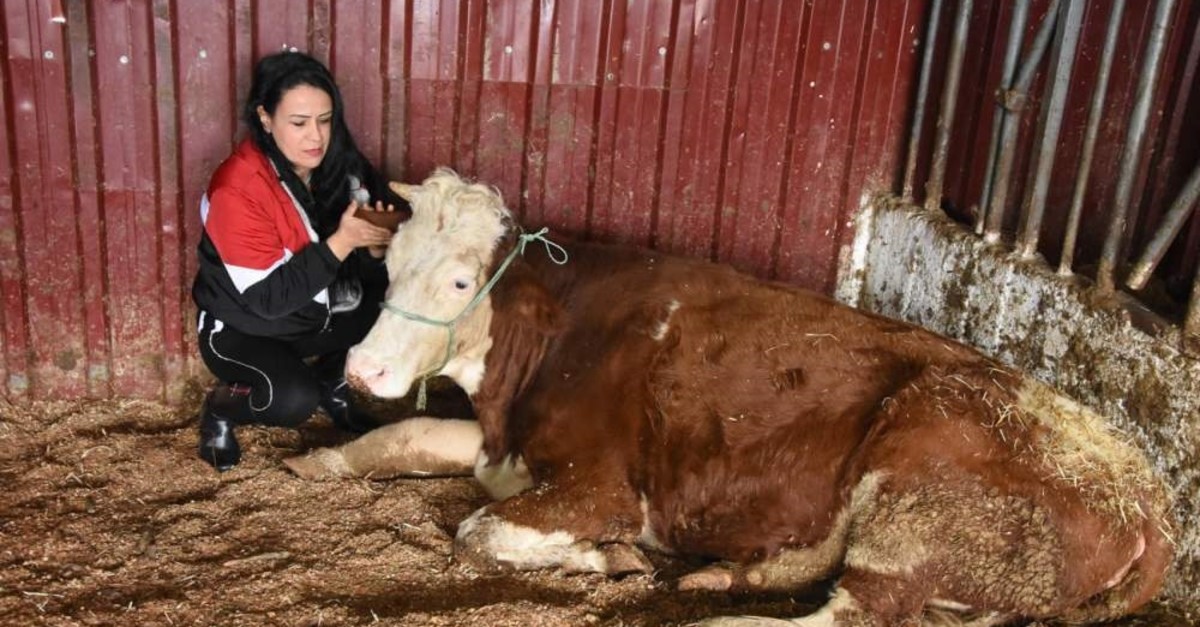 Animals were among the casualties of last month's deadly earthquake in the eastern Turkish province of Elazığ that killed 41 people. Three cows rescued from the disaster found a new home some 1,200 kilometers away from their destroyed barns.

The trio of Simmental cattle is now striving to overcome the trauma of the disaster at Melekler Farm in the Kemalpaşa district of İzmir in western Turkey. The farm, which is already a sanctuary for animals saved from torture and other traumatic experiences, admitted their new guests recently after a group of volunteers transported them there.

The cattle were found under the rubble of two barns in Çevrimtaş, a rural neighborhood in Elazığ. One of them, a pregnant cow, was rescued after three days, suffering a fracture in her skull and losing her horns. Two others, including another pregnant cow, were pulled out of the rubble in an operation that took one day. They also suffered fractures.

Sibel Çakır, the owner of Melekler farms, said volunteers, including singer Haluk Levent, covered the treatment of animals. "They are doing well now. When they were first brought here, they were not eating anything because of the stress. They were in a state of panic. Even the slightest movement irked them. Still, they are of a race known for calm features, and we did not have trouble in caring for and treating them," she told Demirören News Agency (DHA) on Friday. On the pregnant cows, Çakır says they were feeling better and started "walking again," though with difficulty. "We expect them to be better after giving birth," Çakır said.

Several municipalities and organizations across the country launched adoption campaigns for rescued stray animals or pets that became homeless after their owners were killed or had their homes destroyed. A cat injured in Elazığ was adopted by Antalya Metropolitan Municipality after a video of the feline searching for its owners amid collapsed buildings went viral on social media. Another pet, this time a dog, was temporarily adopted by Istanbul's Kadıköy Municipality as the veterinarian who was taking care of the abandoned dog had to give the canine up for adoption after his clinic was damaged during the earthquake.

Not all of the animals were as lucky, however, as a woman living in Elazığ's neighboring Gaziantep province had to bid farewell to her beloved pet as the earthquake caused her 7-year-old dog to die from cardiac arrest. While residents in Elazığ and the neighboring provinces wait for life to return to normal as they cope with the devastation, experts and organizations urged locals and authorities to keep an eye out for stray animals and pets, as they are expected to be more vulnerable than ever.