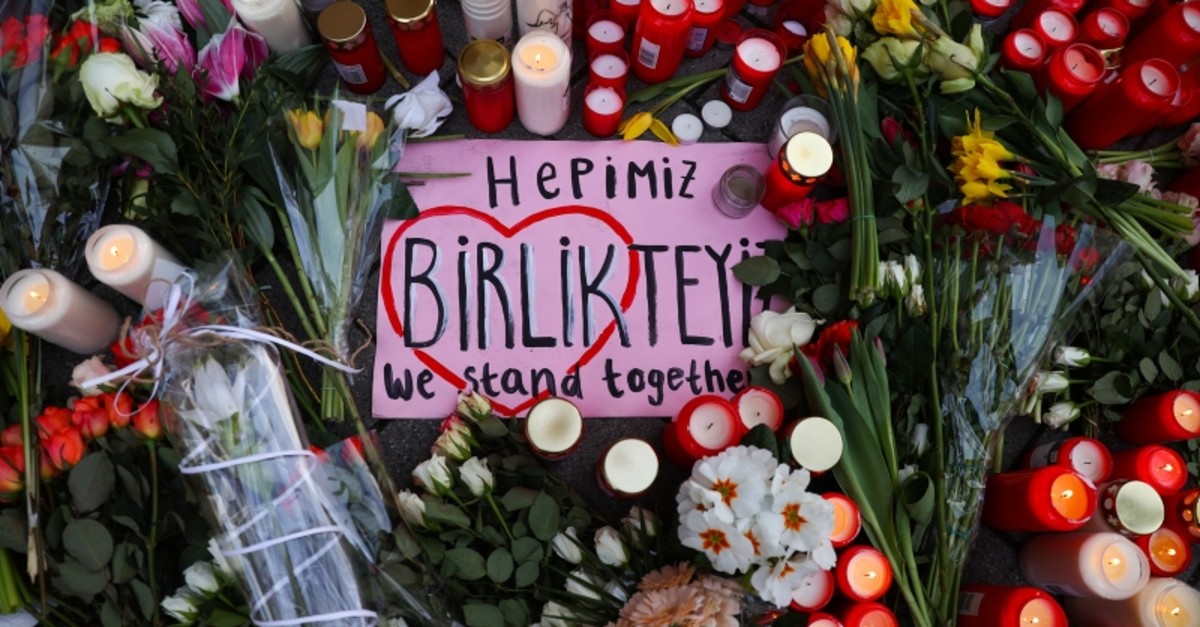 A placard, flowers and candles are pictured during a vigil for the victims of a shooting, in Hanau, near Frankfurt, Germany, February 21, 2020. (Reuters Photo)
by Daily Sabah with Agencies Feb 21, 2020 7:30 pm

Germany was rocked Wednesday by two shootings carried out by Tobias Rathjen, a terrorist harboring racist views. Rathjen gunned down nine people of immigrant backgrounds, including five Turks, before killing himself in the town of Hanau. It was one of the worst acts of terrorism with racist motives in recent memory. The attacks, however, are not that surprising, given the rise of far-right rhetoric in the country and in Europe.

The tolerant political climate under the pretext of freedom of speech helped far-right sympathizers with violent tendencies expand their support. Western media, meanwhile, is once again criticized for their aversion to using "terrorism" while describing the attacks. Social media was awash with posts critical of Western media outlets preferring to give little coverage to the attacks or framing the assailant as "a deranged shooter." "This would be a top news story if the shooter was Muslim," a social media user tweeted after the attacks. "Another white supremacist terrorist murders at least 10 in Germany, yet people won't flinch because he didn't shout Allahu Akbar," another user tweeted.

German Interior Minister Horst Seehofer also acknowledged them as "terrorist attacks." Speaking in Berlin on Friday, he noted that it was the "third right-wing terrorist attack in just a few months." "Danger from right-wing extremism, anti-Semitism and racism is very high in Germany," Seehofer said. He also dismissed references to the assailant's psychological state as being responsible for the killings. "The racist motivation for this crime is in my view incontestable and cannot be relativized by anything."

Seehofer said he had, in consultation with the interior ministers of Germany's 16 states, agreed on concrete measures to increase security on account of the possibility of imitation attacks and the emotionally charged situation. "We will increase the police presence across the whole of Germany. We will guard sensitive sites more closely, in particular mosques," he said. A visible police presence is usually stationed outside synagogues and other Jewish facilities in Germany. The federal police would provide personnel and equipment to the regional forces. "And we will ensure a greater federal police presence at railway stations, airports and along the borders," he said.

In response to the attack, political parties have called for the domestic intelligence services to monitor the activities of the far-right Alternative for Germany (AfD), currently the largest opposition party in parliament. There is, however, no proven link between the shooter and the anti-immigrant AfD. Several party members denounced the shooting Thursday.

Chancellor Angela Merkel said earlier that the attack was motivated by racism. "Racism is a poison. Hatred is a poison. And this hate exists in our society," Merkel said in an initial reaction to the news.

Germany's government faced calls to toughen gun ownership laws and step up efforts to track far-right sympathizers after Rathjen was found to have published a racist manifesto. He had posted the document, espousing conspiracy theories and deeply racist views, online.

Rathjen, who is believed to have killed himself and his mother after the shootings, belonged to a gun club, raising questions as to how a man with such ideological convictions managed to gain membership and obtain the weapons he used. "We need new and stricter laws to regularly and thoroughly check owners of hunting and firearm licenses," Bild – Germany's biggest-selling newspaper – wrote on its front page. "We immediately need more (intelligence) positions to monitor right-wing radicals and intervene before it's too late."

Federal Prosecutor General Peter Frank said Friday that the suspect had a license for two weapons and it remained unclear whether he had contacts with other far-right sympathizers at home or abroad.

In October, Chancellor Angela Merkel's government outlawed the sale of guns to members of extremist groups monitored by security agencies and obliged online platforms to inform police about hate content. Those measures followed the killing of a pro-immigration German politician in June and an attack four months later on a synagogue and a kebab shop in Halle by an anti-Semitic gunman, who live-streamed his actions.

Germany's political parties raised the possibility Friday that the far-right Alternative for Germany (AfD) could be officially monitored by domestic intelligence services, in response to the attacks. Merkel's Christian Democrats (CDU) noted that current plans to change legislation on the monitoring of potentially unconstitutional entities focused on increased surveillance of individuals – but other parties took a stronger line. The Social Democrats (SPD), in coalition with the CDU, called outright for the AfD, currently the largest opposition party in parliament, to be monitored. "Someone opened fire in Hanau – that's how it appears – but there were many others who provided ammunition to him, and the AfD is definitely part of that," SPD Secretary-General Lars Klingbeil told the ARD public broadcaster.

"It's absolutely clear that the AfD is a party that must be monitored by the Office for the Protection of the Constitution," Klingbeil said, referring to the domestic intelligence agency. Speaking for the economically liberal Free Democrats (FDP), Konstantin Kuhle said: "The AfD, as a whole, is increasingly moving in the direction of (becoming a case for) surveillance." Noting calls by AfD firebrand Bjoern Hoecke for a "revolution," he said this could not be tolerated by a democracy with a will to defend itself.

German law allows an organization to come under surveillance by the intelligence services once the authorities discern signs of extremism. During the initial phase, termed a "test case," the use of undercover agents or other covert means is not allowed. The next phase – or "suspect case" – does allow surveillance of this kind.

Racist terrorism on the rise

Racist attacks targeting Muslims or immigrants increasingly make the headlines as the white supremacists become more efficient in an age where their ideals or at least part of them, go mainstream. Not a single, large terrorist group harboring a racist agenda against Muslims and immigrants exist but copycat attacks apparently inspire more to take up arms. Germany's neo-Nazi scene, for instance, produced National Socialist Underground (NSU), a gang of only three members. They were few in number but has long gone undetected, apparently protected or conveniently ignored by authorities for a year before their murders of nine immigrants between 2000 and 2006 were disclosed years later.

Figures show a 320% rise in racist terrorism in the West in the past five years. Under the pretext of "Islamization" of the countries they live in, racist terrorists went from attacks to mosques to mass killings. Anders Behring Breivik of Norway who slaughtered 77 people in July 2011 is viewed as an inspiration for more attacks to follow. Four years later, Anton Lundin Pettersson, harboring similar views with Breivik, killed four students with immigrant backgrounds in Sweden. In 2016, 10 people were killed in Germany's Munich in another racist act of terrorism.