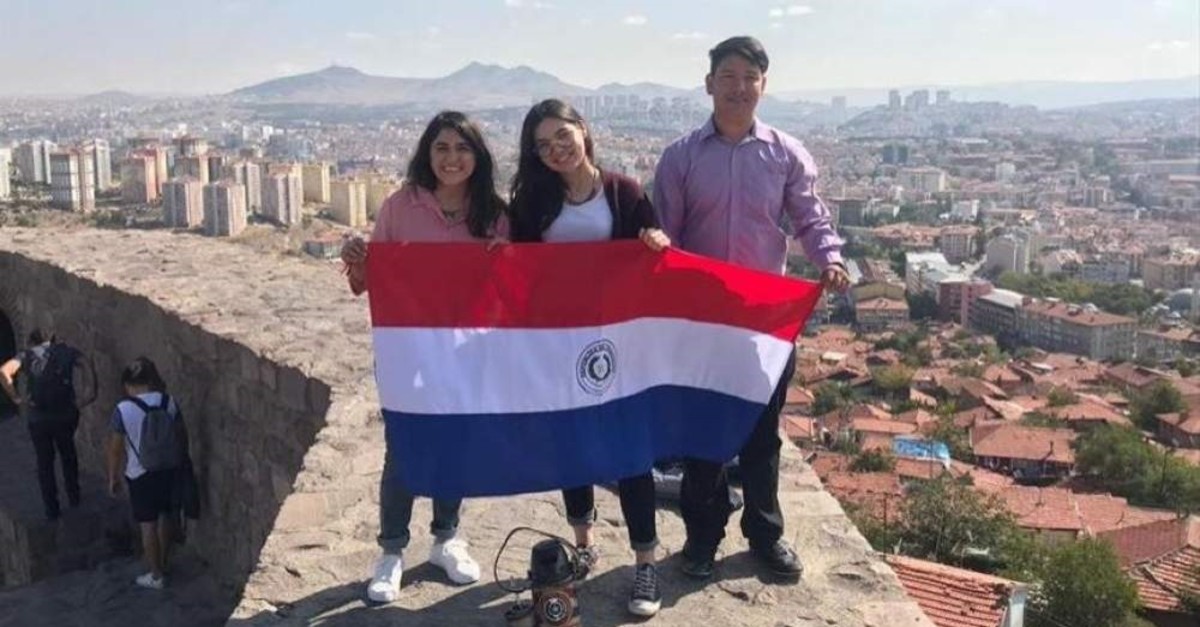 Nearly 12,000 kilometers from home, three Paraguayan students will complete five months of study in Turkey at the end of this month. Gregorio Ramon Ayala Aquino, 20, Alma Celeste Mena Benegas, 19, and Maria Cecilia Nunez Campuzano, 24, applied to the Presidency for Turks Abroad and Related Communities (YTB) for a scholarship from Paraguay and now, continue their education in Turkey's Black Sea province of Samsun and the central province of Konya. As the first-ever batch of Paraguayan students, they told Anadolu Agency (AA) that as soon as the opportunity emerged to study abroad in Turkey, they did not hesitate to grab it.

They chose Turkey because of its historical and cultural richness and academic opportunities. "Turkey is a country with extraordinary wealth in terms of history, culture and development, with a highly respected higher education," said Mena, who studies chemistry at Selçuk University in Konya. "This country deserves to be discovered and admired deeply by Paraguayan students; they will not regret it."

Nunez, a radio, television and cinema master's student at Selçuk University, said Turkey met her expectations even before she arrived. "Before coming to Turkey I read a lot about the country and its culture. I heard that it is a very hospitable and safe country," she said. "When I arrived I found exactly the same."

Although the young Paraguayans said there are differences in culture, including religion and cuisine, the nations share "certain similarities" when it comes to hospitality. "The culture is totally different from my country. For example, in Paraguay people are mostly Catholic, while here they are Muslim. But I think the Turkish hospitality is like the Paraguayan, which fascinates me," said Ayala, who is working on a bachelor's degree in political science and public administration at Ondokuz Mayıs University in Samsun. Mena said Turkey and its language have influences in Paraguay because of the many Turkish television series that were popular a few years ago, which led to the "deep admiration of Paraguayans for the beauties in landscapes and culture that Turkey has."

They said they are used to local tastes and are enjoying them, especially dishes served with yogurt, and ayran — a traditional salty drink made of yogurt and water.

In a short span of time, all three can already speak Turkish at an intermediate level. "This February, five months since our arrival in the country were completed; we are still learning the language with a few weeks to go to the B2 level of the language," Mena said.

Saying the language education at their university is "extremely effective," she emphasized that in five months they have reached a level where they can explain themselves and have conversations with Turkish peers and other international students around them. They also praised the "very effective and accessible" public transportation system in Turkey. The students explained the paperwork process for international students who want to be a part of a similar experience. Students should fill an application form for the scholarship program on the YTB's website with necessary documents, they said. "And the process takes nearly five or six months before the shortlist is announced."

In 2019, 146,000 foreign students applied for scholarships to receive higher education in Turkey. Turkey Scholarships, a YTB project, is not just about the financial aid provided to foreign students as they are also settled in their desired university programs, making the scholarship more comprehensive and different than other scholarships. The international students can benefit from the social, cultural and academic activities of Turkish higher education institutions and receive professional education. Applications can be submitted free of charge at www.turkiyeburslari.gov.tr.