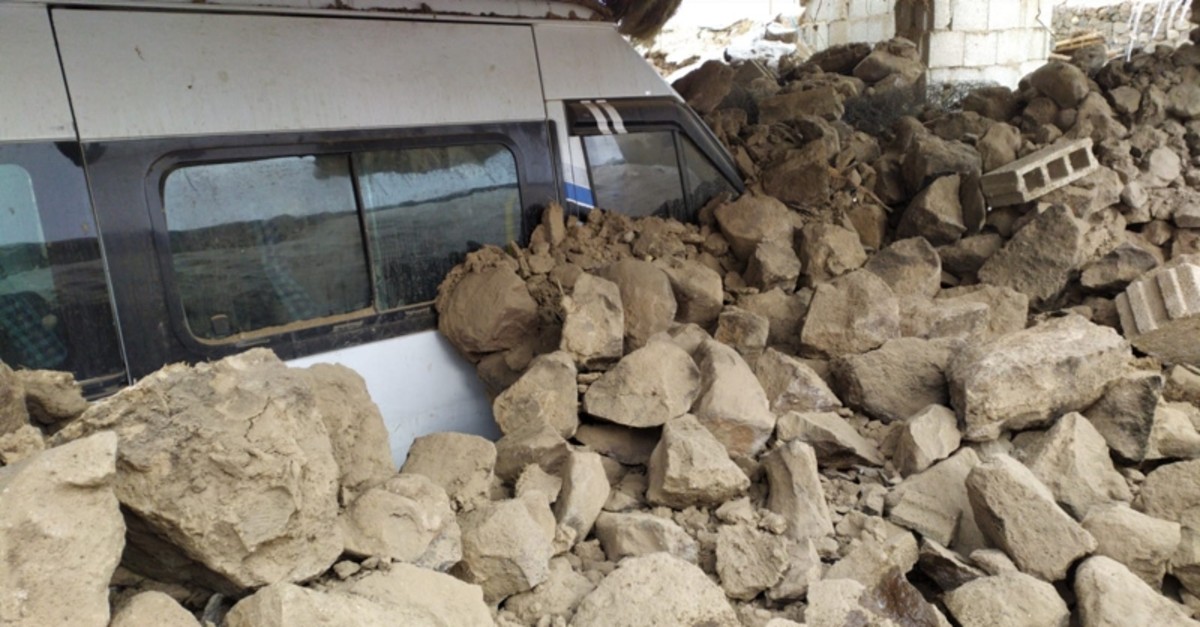 At least nine people were killed and 50 others injured after a 5.9 magnitude earthquake struck the Turkey-Iran border region, authorities said Sunday.

According to Turkey's Disaster and Emergency Management Authority (AFAD), the quake struck the Iranian city of Khoy in the country's West Azerbaijan province at 8:53 a.m. local time reaching a depth of 5.2 kilometers. The authorities reported several further quakes measuring up to a magnitude of 3.9. The province borders both Turkey and Iraq.

Soylu said AFAD teams were quickly dispatched to the earthquake-hit villages near Van to rescue people stuck under rubble.

Shortly after Soylu's statement, Van Governorate confirmed all survivors under the debris were rescued by first responders.

The minister said experts at the scene were still assessing damage to the buildings and urged citizens to avoid entering damaged buildings.

Health Minister Fahrettin Koca said at least 50 people had been injured, including nine who are in a critical condition.

Koca said 25 ambulances, a medical helicopter and 13 emergency teams had been sent to the region. AFAD said 144 tents for families had been dispatched.

Foreign diplomatic missions in Ankara conveyed their condolences over the deadly earthquake.

The Delegation of the European Union said in a tweet "it stands in solidarity with the people and authorities of Turkey in their hour of need."

The U.S. and British embassies in Ankara extended condolences to the families of the victims and wished a speedy recovery to the wounded.

Iran’s official IRNA news agency said the earthquake affected 43 villages in the mountainous Qotour region. It reported 75 residents were injured but didn’t say if any were in critical condition.

Hours after the quake in Iran, Turkey was shaken again by another, smaller earthquake. A magnitude 4.5 earthquake hit the western province of Akhisar at 3:40 p.m. local time, according to AFAD.

No damage or casualties have been reported in Manisa or in the neighboring provinces.

The earthquake followed a series of deadly disasters that struck Van province and Turkey's eastern region.

In early February, 41 people were killed in Van in the worst avalanche disaster to hit Turkey since 1992. The tragedy struck after a second avalanche on Feb. 4 claimed the lives of 36 people, including search and rescue crews dispatched to the area to search for the passengers of a minibus buried under the snow from the avalanche earlier in the day.

The avalanche occurred at a time when Turkey was still reeling from a massive earthquake that claimed dozens of lives.

On Jan. 24, a magnitude 6.8 earthquake shook the eastern province of Elazığ, killing 41 and injuring more than 1,600 people. The earthquake brought down dozens of buildings and brought life to a halt in Elazığ and the neighboring province of Malatya.

The region is very familiar with earthquakes because of the North Anatolian Fault (NAF), which stretches from the western part of the country to the eastern border provinces. The NAF line also passes through 20 kilometers south of Turkey's cultural and commercial capital, Istanbul.

Numerous tremors have occurred on this fault line in recent history. One such earthquake hit Elazığ's northern neighbor Erzincan province in 1939, which was recorded as the strongest and deadliest of Turkey's Republican period. About 33,000 people died and more than 100,000 were wounded in the earthquake that completely destroyed the city and about 116,000 buildings collapsed.

Many more earthquakes occurred in the region later, including in Erzurum, Muş, Van and Diyarbakır. The 1999 earthquake in northwestern Düzce province also occurred on the same active NAF line and caused around 17,000 deaths, greatly affecting Istanbul too.