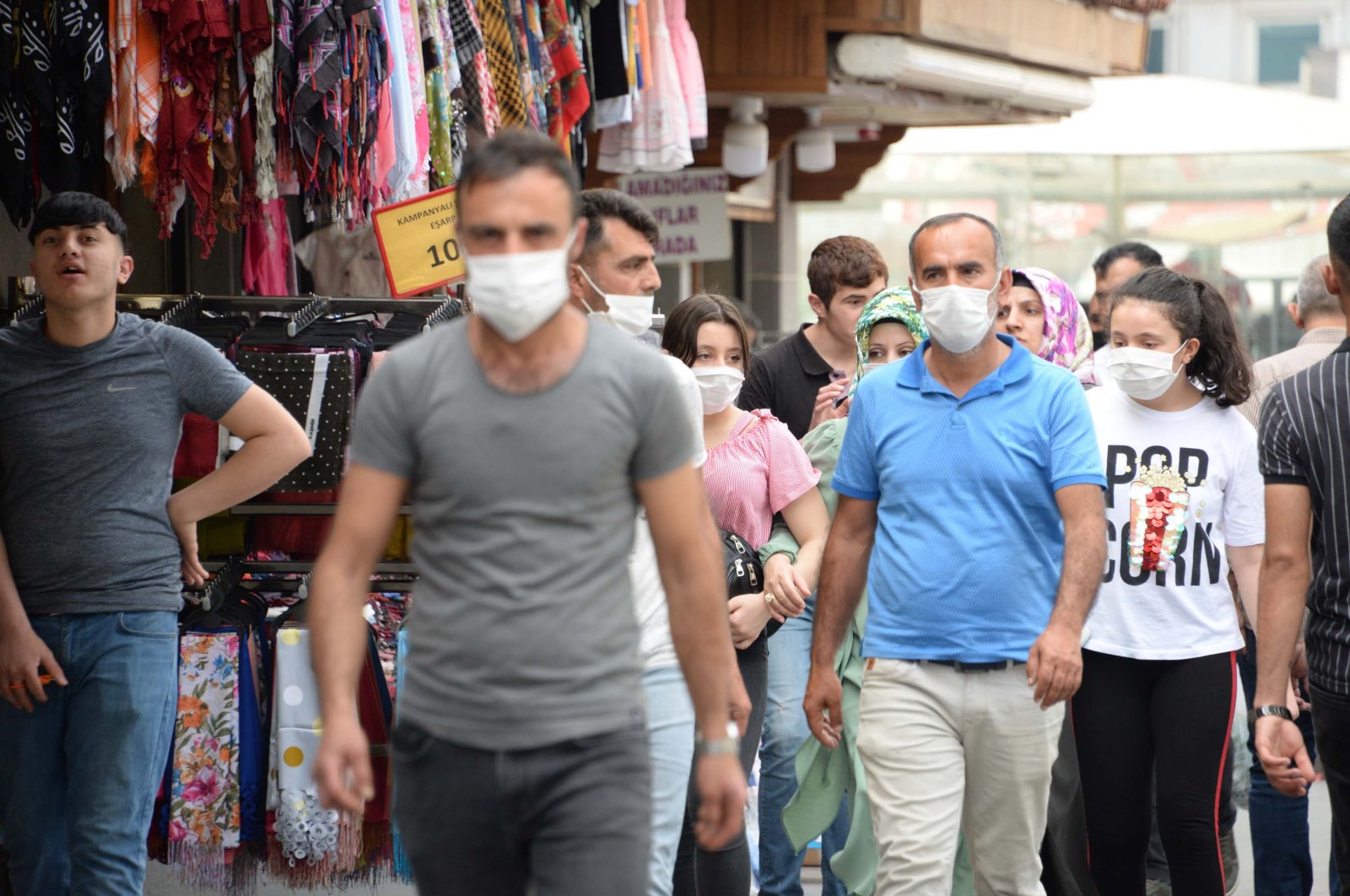 A sudden uptick in the number of COVID-19 cases in Diyarbakır, a big city in the heart of southeastern Turkey, raises concerns while Turkey remains cautious of new cases elsewhere after normalization

More than 300 new COVID-19 cases in one week triggered an alarm for health authorities in Diyarbakır, one of the biggest cities in Turkey’s southeast. Experts fear “a second wave” of cases in the city which managed to reduce the number of cases thanks to strict measures since March. The new surge comes amid nationwide fear of a new rise in infections after Turkey rolled back major restrictions on June 1. Though it is too early to say if the majority of people ditched measures after restrictions were lifted and therefore, contributed to a rise in cases, the Diyarbakır example may prompt authorities to introduce restrictions again.

With the increase in cases, health authorities decided to increase the number of COVID-19 clinics in the city from one to five, with the launch of two pandemic hospitals. Media outlets report hospital bed capacity was overwhelmed and newly diagnosed patients are being isolated in their homes. Diyarbakır Governor Hasan Basri Güzeloğlu announced on Monday that the city’s residents are required to wear masks while outside all the time starting on Wednesday. Güzeloğlu lamented that the city was not at the desired level in terms of mask use and social distancing and the city’s pandemic board which oversees coronavirus measures had to make it mandatory to wear masks. Several neighborhoods and districts in the city were already placed under quarantine after a large number of cases emerged.

Professor Recep Tekin, an infectious disease expert who also heads the COVID-19 intensive care unit at a local hospital, says Diyarbakır was “close to a second wave now and may have more cases in the coming days.” “We almost have difficulty in addressing the increasing number of cases,” Tekin told Demirören News Agency (DHA) on Tuesday. “After the normalization process started, people felt relaxed, wrongly. This contributed to the surge. We had closed clinics last month because of a low number of cases, but we had to reopen them. Our hospital faces a shortage of beds especially due to cases transferred here from districts,” he says. Tekin pointed out that people ignore social distancing rules and did not wear masks in crowded places in the city.

After Turkey started gradually lifting restrictions in May which were imposed to limit the pandemic, media outlets and social media are awash with photos and videos of people mingling freely, sometimes not wearing masks, despite the existing risk of infection. The government will hold its weekly meeting on Tuesday and is expected to discuss whether to impose some restrictions again though the number of new cases remains relatively low.

Deaths from the COVID-19 outbreak in Turkey climbed by 19 to 4,711 on Monday, Health Minister Fahrettin Koca said, while the total number of cases increased to 171,121.

According to Koca, 989 new patients were confirmed in 39,361 tests carried out in the last 24 hours.

The minister also said 3,411 patients have recovered in the past day, bringing the total number of COVID-19 recoveries in the country to 141,380.

“There is an increase in the number of new cases that can be stopped by practicing social distancing and proper use of masks. We have also recorded a significant increase in recoveries. Dependence on ventilators is on the decline. Patients in intensive care units, however, are climbing. The risks will increase if precautions decrease,” the minister said. As of Monday, 625 patients are being treated in intensive care, the minister added.

Turkish President Recep Tayyip Erdoğan warned the public on Monday that the pandemic was not over just because the government lifted restrictions. Speaking in a televised interview, Erdoğan called on the public to comply with rules for wearing masks, keeping social distance and personal hygiene. “I plead to my dear nation to be careful on these three issues. Please do not neglect wearing masks, especially in closed spaces and keep a distance of at least 1.5 meters (4.9 feet) away from other people,” he said.

“If we follow the rules, my brothers at the age of 65 and above will not be harmed,” Erdoğan said, referring to senior citizens in the high-risk groups from COVID-19. People at the age of 65 and above are subject to a curfew though they are allowed to step out on one particular day, every week. Erdoğan also warned the young people “who think they will get away with the disease because they are young” and described social gatherings at picnic spots and in some parties as “wrong.” “The only thing we can do against the virus is heeding the advice of (Health Ministry) Coronavirus Science Board,” the president said, referring to a task force of scientists coordinating the country’s response to the pandemic. Erdoğan, however, hailed the current state of the fight against the pandemic, noting the lowering number of daily cases and fatalities. “We will be happier when fatalities decrease to zero, but current developments are not bad too,” he said. He highlighted that Turkey was in 11th place in the world in terms of the number of fatalities.

Professor Önder Ergönül, an infectious disease expert, says Turkey may need to bring back restrictions in case of a surge in cases in the next five days. Speaking to Demirören News Agency (DHA) on Tuesday, he warned about low immunity to the virus. “Some limited studies show the herd immunity is about 5% now. It may even be lower. So, it is too early to relax measures we should comply with,” he said. He pointed out that the average incubation period of the virus was five to six days and they may see new cases in the coming days, warning citizens not to act “too careless.” “As the public, we have to be careful in following the rules recommended by the Health Ministry.”

A new board against the pandemic

The Health Ministry, which organized a board of experts on infectious diseases against the pandemic, now set up a Social Sciences Board to address the social fallout from the outbreak. The board, which will work on the virus’ impact in terms of sociology, communications, psychology, religion sociology and statistics, held its first meeting on Monday. Addressing the meeting via video link, Koca said Turkey was now in the second phase in the pandemic being called the “controlled social life.” “The fight against the pandemic is also one that should be fought with the aid of social sciences. For instance, we have seen 190 people infected when they visited a patient recently. This was a cultural behavior, and we need to address such problems and take measures accordingly. The fight against the pandemic is also a topic in social psychology management. We have to add religious and cultural sensitivities to the equation. We witness the fear of the virus decreasing, thus, we are concerned that people will develop resistance to measures despite the existing risks. This is one of our priorities now,” he said. Koca said the new board would issue advice on the social impact of the pandemic. “We need to know how the society will behave in the face of a pandemic, to know collective behavior against it,” he said.

Turkey, meanwhile, continues to work on vaccines and drugs against the coronavirus. Mustafa Varank, minister of industry and technology, said Turkey was developing a diagnosis kit that would be “first of its kind in the world.” Addressing a videoconference event on Tuesday, Varank said Turkish scientists were trying new technologies along with conventional methods in the fight against the pandemic. “A nanotechnology-based diagnosis kit is currently being developed,” he said.

“We managed to produce a locally made ventilator in just two weeks. It is superior to its counterparts and in world standards. We are also able to locally manufacture active ingredients of two drugs used in the treatment of COVID-19 which we had to import in the past,” he noted.