Animals no risk for COVID-19, experts assure ahead of Qurban Bayram in Turkey 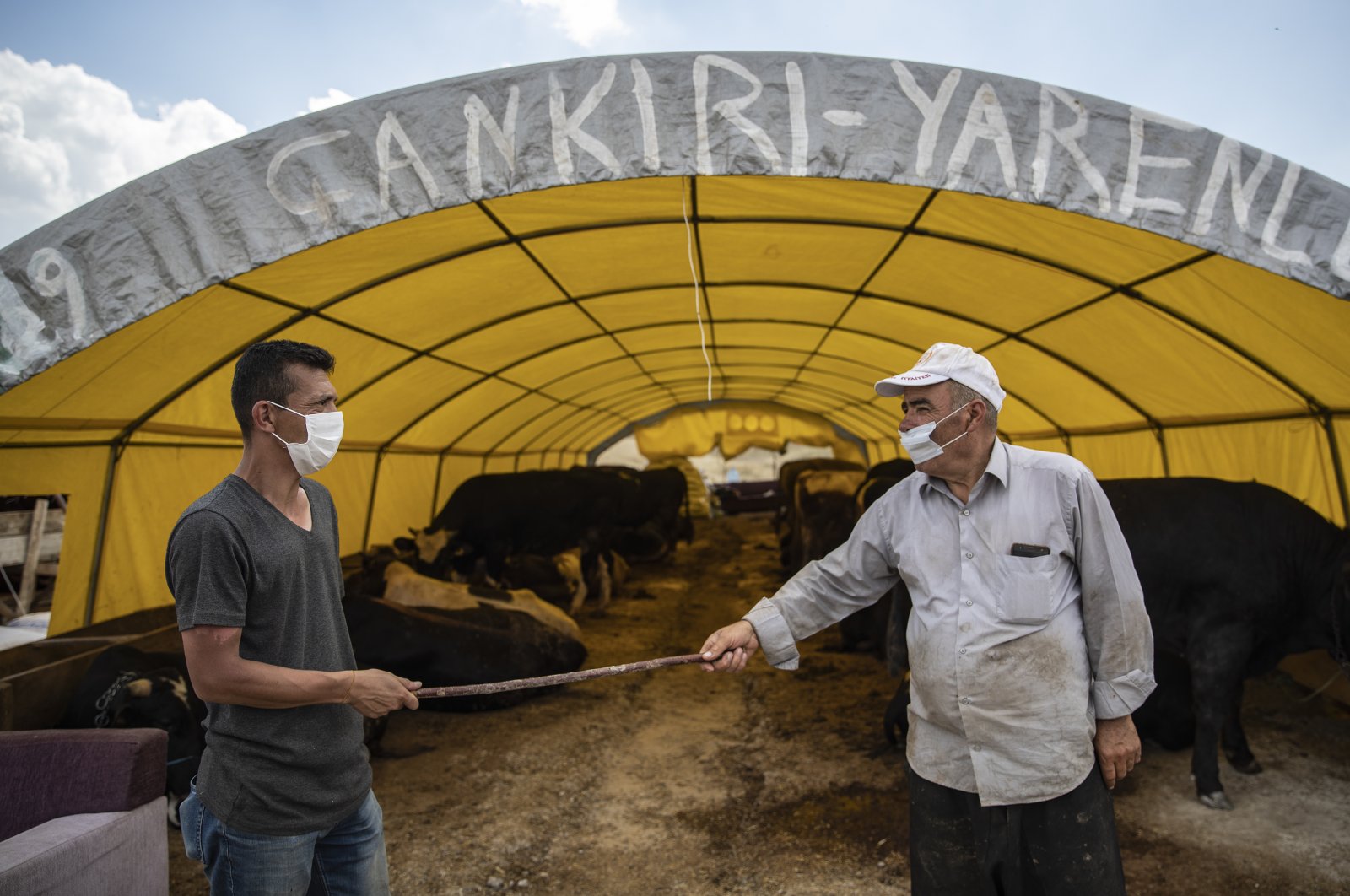 A seller and a buyer use a stick instead of traditional handshake for bargaining during the sale of sacrificial animals, Ankara, Turkey, July 17, 2020. (AA Photo)
by DAILY SABAH Jul 17, 2020 2:36 pm

As Turkey gears up for the Islamic festival of Qurban Bayram, or Eid al-Adha, experts assure the public that animals pose no risk for spreading COVID-19

At the end of July, Turkey will join the rest of the Muslim world in celebration of Qurban Bayram, or Eid al-Adha, which is traditionally celebrated by the slaughter of animals and the donation of their meat to the poor in a symbol of solidarity. This year, however, the event will be a slightly more muted affair in light of the ongoing COVID-19 pandemic.

Experts, meanwhile, are seeking to assuage public fears that the slaughtering process could increase the risk of a further spread. Professor Murat Arslan, head of Istanbul Chamber of Veterinary Surgeons, says the virus cannot be transmitted from animals – though he still urges caution.

The holiday, in which every Muslim who can afford to is obliged to sacrifice an animal, usually sees an exodus of urban populations to their hometowns to visit relatives, while many others head to vacation resorts in the Mediterranean and Aegean regions. Bazaars for the sale of sacrificial animals are also set up in cities and attract a large number of customers. Bazaars have already been opened under strict measures, including social distancing requirements and mask-wearing. Customers have also been urged to ditch customs such as sealing a sale with a lengthy handshake while shopping.

Arslan cites a barrage of misinformation about the link between sacrificial animals and COVID-19 as the cause of concerns. “We already know you cannot get infected from pets. The same applies to sacrificial animals (sheep, cows etc.). Even if an animal is infected, the virus cannot live long on that animal. There is no scientific evidence showing the transmission of the virus from animals to humans, but people should be careful during the animal's transportation and the distribution of meat,” Arslan told Anadolu Agency (AA) on Friday, pointing out that even if the meat contained traces of the virus, this would be eliminated by the cooking process. Scientists say the virus cannot survive temperatures much higher than that of the human body.

Marketplaces remain a risk, according to Arslan, despite a number of safety measures, including single entry/exit points and wearing protective equipment at all times. To prevent crowding, he recommends sellers deliver the bought animal to the buyer only at the slaughterhouse upon appointment.

“There can be appointment-only slaughters. Usually, people tend to slaughter animals on the first day of the three-day holiday, and this leads to crowds. If butchers work upon appointment only, however, instead of accepting people waiting in line, it will ease crowding,” he says. He also recommends carrying out the slaughtering process at night too – an uncommon practice in Turkey.

President Recep Tayyip Erdoğan ruled out a curfew for Qurban Bayram as was rolled out during Ramadan Bayram, or Eid al-Fitr, back in May.

“It is difficult to take such a step but certainly, (the Health Ministry’s) Coronavirus Science Board will assess it. Qurban Bayram is different (than other holidays). People will slaughter sacrificial animals and visit each other. That said, a curfew is not on our agenda for now,” the president said.

Professor Naim Deniz Ayaz, a member of the Ministry of Agriculture and Forestry’s science board, said COVID-19 had been detected in cats and dogs, but there were no such cases among animals deemed fit for slaughter, including sheep, goats, cows or camels. He said, however, that animal marketplaces were potentially risky without measures in place.

“We are talking about the sale and slaughter of nearly 3.5 million animals. There will be greater mobility among people. So, adhering to social distancing and wearing face masks is important,” he told Demirören News Agency (DHA), while urging the public to store meat from slaughtered animals in minus 4 degrees Celsius (minus 39 degrees Fahrenheit) and cook it at a temperature of above 70 degrees Celsius as the virus becomes inactive above 70 degrees Celsius usually.

Turkey reported less than 1,000 new COVID-19 infections for the third day in a row with 933 registered cases in the last 24 hours as of Thursday evening.

Announcing the country's daily coronavirus figures on Twitter, Health Minister Fahrettin Koca said 933 new infections had been detected out of the 42,411 tests carried out in the past 24 hours, bringing the country's total number of coronavirus cases to 216,873. Meanwhile, the number of people who have recovered from COVID-19 reached 198,820, with 1,087 patients declared coronavirus free over the past day.