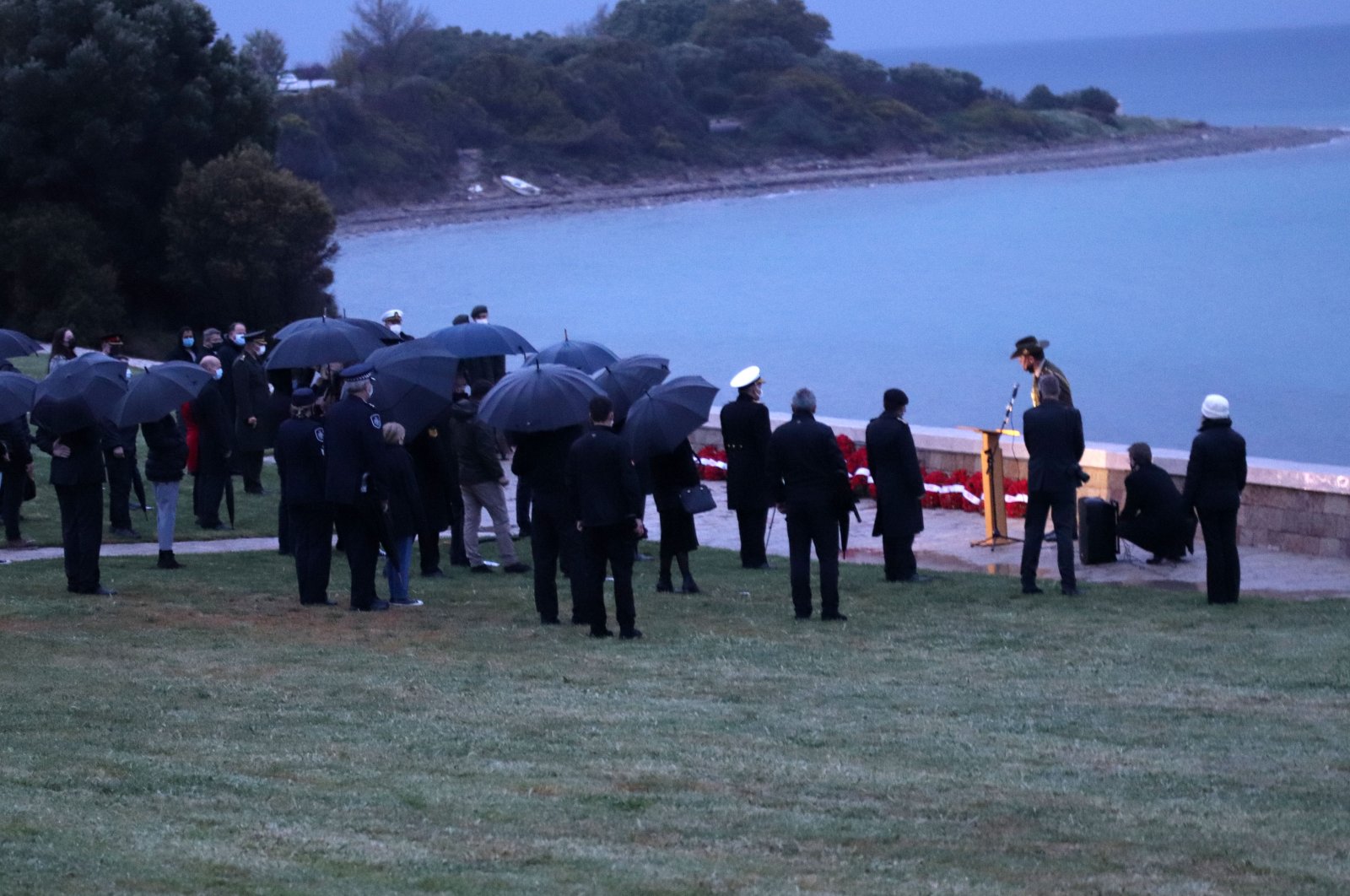 The dawn service held every April 25 is the culmination of events to remember fallen soldiers from Australia and New Zealand lost in a devastating battle during World War I in western Turkey. The occasion falls on what is now known as Anzac Day, which honors the memory of the two countries' veterans and fallen soldiers. Traditionally, it is observed with large crowds, but for the past two years, the coronavirus pandemic has forced ceremonies to be scaled back.

In Turkey, where the battle that paved the way for the day to be marked was fought in, it was a muted affair. Around 50 people, including the official envoys of Australia and New Zealand and a handful of Turkish officials, attended the dawn service and a subsequent separate ceremony Sunday.

Anzac Cove, where the soldiers made their fateful landings 106 years ago in Gallipoli (Gelibolu) of the present-day province of Çanakkale, was eerily quiet except for the clacks and shutters of cameras and cellphones. Gone were thousands – sometimes hundreds – of visitors from New Zealand and Australia who used to sleep on the slope overlooking the cove as they awaited the dawn service every year.

A wreath-laying ceremony with limited participants instead of a larger dawn service was held. Australian Ambassador to Ankara Marc Innes-Brown and New Zealand Ambassador Wendy Hinton made short speeches before Lt. Col. Anıl Aksoy, who represented the Turkish Armed Forces (TSK) at the ceremony, read a letter sent by Mustafa Kemal Atatürk – a World War I commander in Çanakkale who went on to become the founding father of the Republic of Turkey – to families of Anzac soldiers killed in the Gallipoli campaign. A recitation of the anthems of Turkey, Australia and New Zealand wrapped up the ceremony, which was also attended by British Ambassador Dominick Chilcott, Irish Ambassador Sonya McGuinness and French Consul General in Istanbul Olivier Gauvin.

Anzac Day is revered as a celebration of the Anzac spirit, which helped Australia and New Zealand build a national identity, as the landings and sacrifice of the two countries’ soldiers were the first time when those members of the Commonwealth engaged in a war thousands of kilometers away from home.

The landings were the second chapter of a campaign by the Allied forces, which started attacking Ottoman positions in March 1915 in a naval battle, only to be staved off in the Aegean waters filled with a network of mines laid by Ottoman vessels, while land batteries showed a stiff resistance against much superior Allied firepower.

On April 25, 1915, nine months into World War I, Allied soldiers from Australian and New Zealand Army Corps whose acronym gave the day its name, landed on the shores of the Gallipoli peninsula. The troops were there as part of a plan to open the Dardanelles (Çanakkale) to Allied fleets, allowing them to threaten the Ottoman capital Istanbul, part of the Central Powers led by Germany, and help their ally the Russian Empire. Allied forces, however, encountered strong and courageous resistance from the Turks and the campaign turned out to be a costly failure. Tens of thousands of Turkish nationals and soldiers died, along with tens of thousands of Europeans, plus around 7,000-8,000 Australians and nearly 3,000 New Zealanders.

The costly victory against the Allied forces boosted the morale of the Turkish side, which went on to fight until 1918, surpassing most expectations. The Ottomans were eventually defeated as fronts in Iraq and Palestine collapsed with their ally Germany also on the brink of defeat and Bulgaria surrendered, exposing Istanbul to the Allied forces who had landed in Greece. The Turks, led by their Gallipoli hero Atatürk, went on to wage its War of Independence between 1919 and 1922, and eventually formed a republic in 1923 from the ashes of the old empire.

The Turkish side also commemorates their fallen soldiers on April 25, but the main events are held on March 18 to mark the Turkish victory. On Sunday, Turkish officials also held a ceremony in Çanakkale for a handover of the flag of the legendary 57th Regiment, from one university to another. The regiment, commanded by Atatürk, lost some 1,800 soldiers in a battle against the incursion by the Allied forces that lasted until May.

President Recep Tayyip Erdoğan issued a written statement on the occasion to remember the soldiers and veterans. “The Çanakkale spirit has been a monumental legacy for future generations as the legendary struggle our nation gave for independence was crowned with a victory. Our nation, which stands united even under the most difficult circumstances, continues today to demonstrate that it will not allow any invasion, even at the cost of lives, for its homeland and flag,” Erdoğan said in his message. He also said that they would continue standing for the rights and sacred values of “our nation whose history is filled with glorious victories” and the living Çanakkale spirit, “to carry our country to the future stronger.”

“I once again remember Ghazi Mustafa Kemal Atatürk and our Çanakkale heroes with respect,” he said.