The first Anzac Day that wasn’t 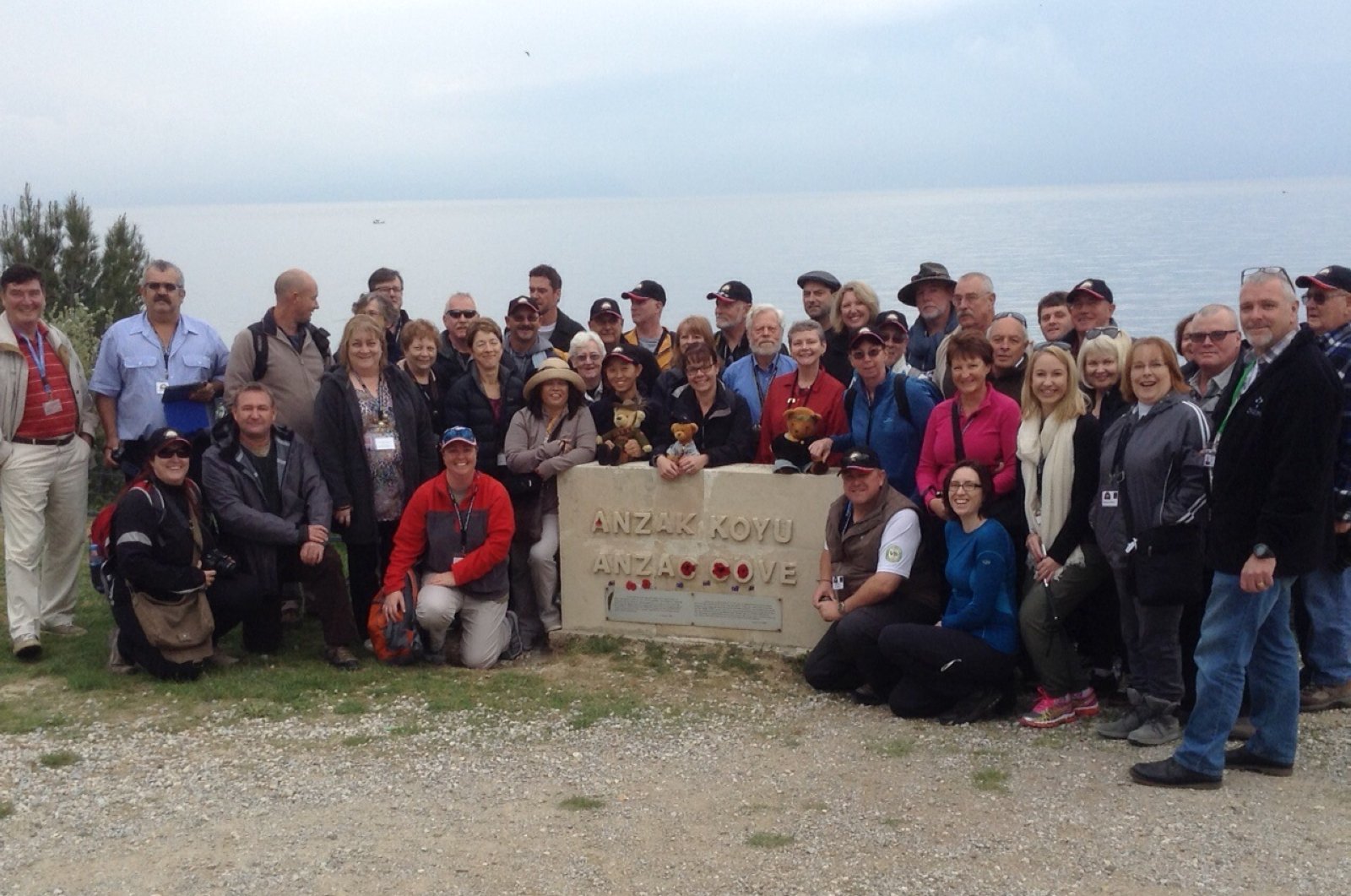 A group shot from a previous visit by Australians.
by Leyla Yvonne Ergil Apr 23, 2020 1:08 pm
Edited By Irem Yaşar

Thousands of Australians and New Zealanders head to Çanakkale every year to commemorate the Anzac soldiers who fell in Gallipoli during World War I. However, this year, they will not take part in the 2020 event due to the coronavirus pandemic

In a normal world, this weekend thousands of visitors from Australia and New Zealand would be descending upon Gelibolu, a peninsula in western Turkey’s Çanakkale province that has been best known throughout history as Gallipoli. This is because this Saturday, April 25, is Anzac Day, a national day of remembrance of the fallen soldiers from Australia and New Zealand that fought for the Allied Forces against the Ottoman Empire in 1915 during World War I in what is known as both the Gallipoli and Dardanelles Campaign.

Similar to the troops themselves, every year on April 25, thousands of Aussies and Kiwis fly halfway across the world to pay tribute at the memorial site in Gallipoli. For many, visiting the memorials of Lone Pine and Chunuk Bair and attending the Dawn Service led by Australian and New Zealand government officials has become a rite of passage of national identity, and for many, it is the culmination of plans years in the making.

Participants would even have to take part in a lottery to secure a spot as thousands fly out each year to visit the historical battlegrounds. Last year alone, there were 2,000 attendees at the Dawn Service and this year that number was estimated to be even higher. However, unfortunately, due to the COVID-19 pandemic, travel plans across the globe are in upheaval and for the first time in history, or in other words ever since the event was first held, Anzac Day in Turkey has been canceled.

I had the opportunity to catch up with Australian expat Craig Roach, aka Roachie and “The Gallipoli Artist,” who happens to be the foremost authority on Anzac Day commemorations and the history surrounding the historical campaign and its memorials. Roach regularly holds tours of the battlegrounds during Anzac Day and at other times of the year. Roach said he first heard from Sydney about the cancellation of all tours until May on March 16. When asked who would be affected by the derailing of this annual commemoration and how, he said: “There is a lot of logistics involved in staging the event. Security, the scaffolding, the training of volunteers from Australia and Turkey and of course those in Turkey who would've been affected financially by the cancellation."

"For the pilgrims, or clients, the cancellation of the 2020 event isn't something we can put off until September, it's date specific, it's April 25th,” said Roach, pointing out that while people all over the world have been asked to "postpone their journeys" until the "all clear," in the case of Anzac Day that means waiting until the next Anzac Day. “We can only hope that people will decide to come for an individual visit in the meantime,” he said, adding: “Travel is a strange creature. We've seen it rebound back after natural disasters, manmade disasters, economic disasters, and we'll see that again I'm sure. It just means there may be fewer service providers.”

Anzac Day is a commemoration that spans back to at least 1934 when all of the graves from the battlefields were consolidated into 33 cemeteries and marked by the reading of founder of the Republic Mustafa Kemal Atatürk’s famous quote of solidarity for the “Johnnies and the Mehmets that lie side by side here in this country of ours” that goes on “You, the mothers who sent their sons from faraway countries, wipe away your tears; your sons are now lying in our bosom and are in peace. After having lost their lives on this land they have become our sons as well.” Asking Roach whether he knows if the commemoration services had ever been halted before, he laughingly replied, “In my time, two things have not occurred: It's never rained and it's never been canceled.”

I asked Roach if he had any suggestions for alternative ways of commemorating the day, to which he replied: “On a personal level and because Gallipoli is such an important part of my life, on the 25th of April at around 3 a.m., I will light a fire on my terrace, listen to some calming music and watch the sun rise over the Marmara Sea, and it will be the same sun at the same time that rose 105 years ago on the men who changed this nation's destiny along with my own.”

Another suggestion Roach dished out is to prepare the famous Anzac Biscuit, which is made from a mix of rolled oats, flour, eggs and golden syrup (molasses), which came about as the result of soldiers using their imagination during the Gallipoli campaign to improve their diets, he told me.

I also asked Roach what his experience has been of life in lockdown in light of the coronavirus. “I'm in touch with our Australian family often. Australia experienced a very ugly side of the virus, panic buying, especially things like toilet paper. I was grateful that here in Turkey we possessed a bit more common sense,” said Roach, adding: “I love Turkey, always have since I first came here in 1984. In recent years I have had to use the Turkish health care system when I fought cancer and I have never met more caring professionals. Every technician, doctor and nurse seems to genuinely care for their patients.”

“I've found Turks to be friendly and supportive of each other and their neighbors. Life is already easier, with less traffic and less reasons to leave the house and more reasons to work in the garden and is an opportunity to help our neighbors, elderly and otherwise," he said.

“It has actually become a healthier and more loving environment. We have musical performances, we tell jokes, we laugh and we are all closer. Maybe there is something to be learned from this. War and terrorism no longer fill our newspapers and TVs, instead, we cry on the inside at images of begowned nurses and doctors saving and sometimes losing their patients. We'll survive, and, to be honest, the world needed some changes,” said Roach.

Roach's wife Sevilay, a Turkish national, added: “We are learning about those things which should be important and gaining a new respect for each other. The world is cleansing itself right now.”