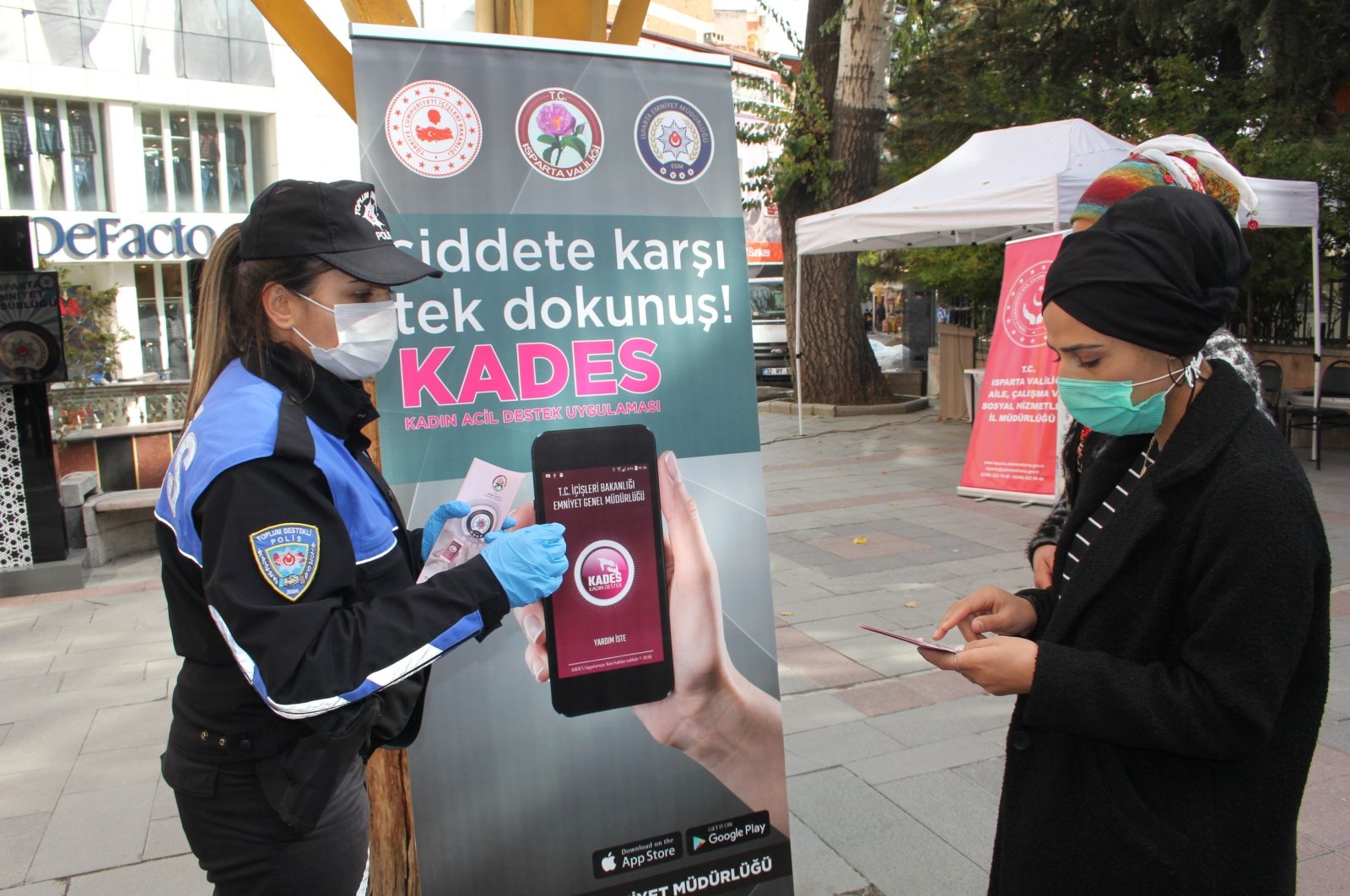 Turkey marked the International Day for Elimination of Violence Against Women on Wednesday with events highlighting the thorny issue still dominating the national agenda. Violence and murders targeting women haunt the country although progress has been made on that front. A patriarchal mindset justifying the acts of violence is the main factor in all cases. Until that mindset changes substantially, protective measures remain the only option for the safety of women. Improved enforcement of restraining orders against violent spouses, longer prison terms and consultation services for women are among those measures.

The latest numbers by Interior Ministry show 234 women were killed between Jan. 1 and Nov. 20 in the country. The issue is under the spotlight in recent years especially with the rise of social media where femicides and domestic violence cases find larger coverage and boost awareness.

Along with preemptive measures, rapid response to domestic violence bears importance. The Women Emergency Assistance Notification System (KADES) developed by police plays a key role in using technology to combat the disturbing phenomenon. KADES is an app that allows victims to alert the police with one click in domestic violence emergencies. It helps protect women with a police response time of about five minutes. Interior Minister Süleyman Soylu announced earlier this week that more than 620,000 people have downloaded the app so far, and it has received 48,686 calls. “It helped us to intervene in some 24,000 cases of domestic violence and prevented a number of potential losses of lives,” Soylu said at an event on domestic violence in the capital Ankara on Nov. 23.

Fatma Akçam is among those who actively used the app. The mother of one who lives in the southern province of Adana suffered physical and psychological violence at the hands of her husband for more than a year. She learned about the app during a visit to the police to complain about her husband. The next time Akçam's husband tried to force his way into her home, she hit the report button on the app. “Police came immediately and took me to a safe place,” Akçam told Ihlas News Agency (IHA) Wednesday. She is now in the process of divorcing him. “Women should not remain silent about what they have gone through. They don’t deserve violence, they don’t deserve to die,” she says.

A.D., who only gave her initials, is another woman who downloaded KADES and was rescued from her abusive husband. The 39-year-old mother of two living in the western province of Izmir suffered from violence from her husband for years and was recently divorced due to the violence. She then decided to download the app when he continued to harass her.

“Now, whenever I see him near my home or when he tries to harass me, I use the app. It looks simple but it really saves lives,” she told Anadolu Agency (AA) on Wednesday. “I had taken my children to the park about one month ago. He chased us. I sent an alert to police via the app, they came and took him away,” she added. The ex-husband is now in custody, but A.D. still fears he might harm her. She says she’ll keep the app on her phone for now.

“Kırmızı Işık” or Red Light, another app, helps women to alert law enforcement to domestic violence cases. Developed by a foundation linked to telecoms provider Vodafone with the support of the Ministry of Family, Labor and Social Services, the app, first launched six years ago, reached out to 346,000 women. The app instantly informs the police or any person the user designates. It is directly linked to police hotline 155. Users can send direct messages and locations to three people previously recorded on the app by shaking their cellphone. It also informs women on what to do in case of domestic violence. Another feature gives users the option to share their location with others they choose throughout any trip they take if they feel they're not safe. If the user deviates from the route, people with whom the location is shared are immediately alerted. With the Arabic language feature, the app also reaches out to refugee women in Turkey, the majority of which come from Arabic-speaking countries.

In 2015, the country also introduced electronic bracelets for perpetrators of domestic violence. The practice gives more freedom to victims in cases where the perpetrator is under house arrest. A police surveillance center tracks the movement of culprits fitted with bracelets around the clock. Any violation from a designated area for the perpetrator of violence ends up with a police visit. C.K., a 22-year-old university student living in the southern province of Antalya, is among the women benefiting from the protection the bracelet offers. C.K., who was repeatedly threatened by a man whose advances she rejected, managed to get a restraining order from a court against him. “I had to drop out of school because of death threats. He was always telling me that he would find me wherever I escape and threatened to kill my family too,” she said, recounting her ordeal to AA on Wednesday. C.K. took refuge in a women’s shelter before a court ordered the man to be fitted with the bracelet. “Now I feel safe because I know someone out there is always watching him,” she said.

“The state backs women but they should raise their voice and ask for help. Every place I applied was really helpful. If they did not, I wouldn’t be alive now,” she said. C.K. now plans to return to school.

Another place women can turn to when facing domestic violence is the Violence Prevention and Monitoring Centers (ŞÖNIM) founded by the Ministry of Family, Labor and Social Services. The centers reached out to more than 700,000 people since they were established in 2013 and are now available in all 81 provinces of the country. The centers provide support for domestic violence victims in every field, from health to legal processes and psychiatric support. They also offer anger management classes for people with violent tendencies.

Measures aside, the issue can be resolved through changing the mindset of perpetrators and this was the common theme of events held across the country on the occasion. Women members of political parties staged rallies to highlight the issue. Women’s branch of the ruling Justice and Development Party (AK Party) called for “year-round awareness” to the issue than confining it to one day of the year. In a written statement recited at the rallies across Turkey, women from the AK Party lamented ongoing physical and psychological violence toward women “despite all efforts, laws and screams of women.” “Women and children suffer in the hands of ignorant people. The whole world still fights against this primitive, violent attitude in the new millennium where humanity has seen progress in all fields. Violence toward women is more than an act of violence targeting one person. It targets the peace of the society, it aims to destroy the family and leaves behind women who are killed or traumatized with a dark future,” the statement said. “It is important to punish perpetrators heavily but it is more important to thwart the violence before it takes place. This is only possible by making each individual more aware,” it added.

DO NOT DIGNIFY PERPETRATORS

First lady Emine Erdoğan, who often campaigns against domestic violence, attended an event on the issue which was held in the capital Ankara via a video message due to pandemic measures. The event focused on the role of TV shows in domestic violence. Erdoğan criticized the media’s language while reporting domestic violence. “The news reports almost give an excuse for perpetrators by describing them as 'angry' husbands or 'husbands who had a meltdown.' Violence and fear are highlighted on media and TV just for drawing audience, readers,” Erdoğan said. She called upon the media to be more responsible. “Please do not dignify a perpetrator for the sake of ratings. Please do not present killers, mobsters and bullies as role models in TV shows,” she said. The first lady said the language and themes highlighted on media channels “unfortunately breed violence.” “Studies show violence on TV causes behavioral disorders and promote violence among the public,” she noted.