Asymptomatic cases a concern as death toll rises in Turkey 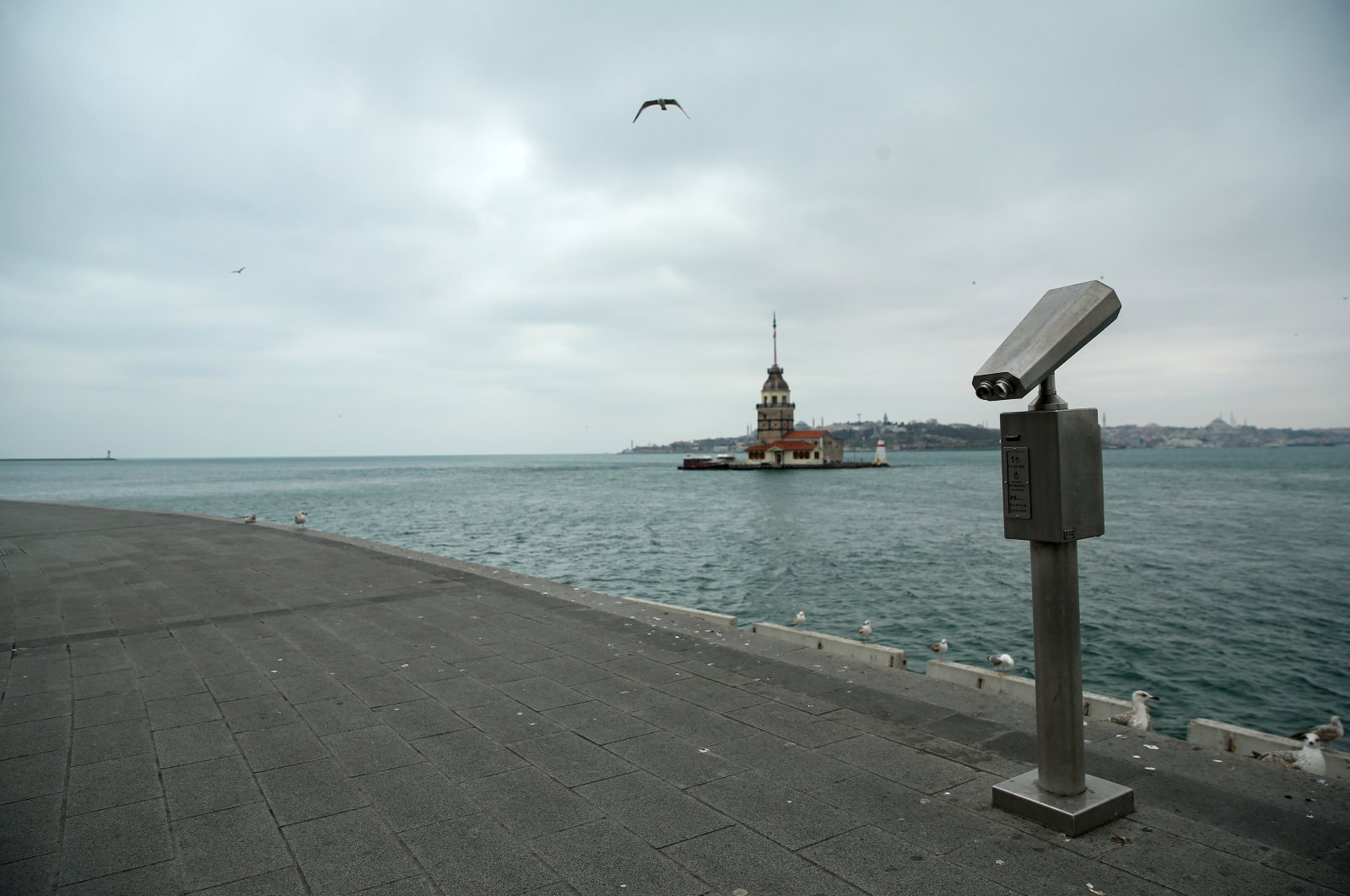 An empty stretch of the coastal promenade of Üsküdar district against the backdrop of Maiden's Tower, in Istanbul, Turkey, Thursday, April 2, 2020. (AA Photo)
by DAILY SABAH WITH AGENCIES Apr 02, 2020 1:51 pm

Turkey is engaged in a war for public health, the health minister said Wednesday, as the death toll increases further and experts warn of the threat posed by asymptomatic infections

As Turkey nears the end of the first of “two critical weeks” in the coronavirus pandemic, the death toll continues to mount.

“This is a war for public health. We want to have the least casualties possible and control the outbreak as soon as possible,” Health Minister Fahrettin Koca said Wednesday. Medical experts, meanwhile, urged caution over “ghost cases,” or virus carriers exhibiting no symptoms.

The country struggles to keep measures tight, short of a complete lockdown. Isolation remains the most effective method to prevent the virus from spreading as the development of a vaccine is still at least months away. Though the virus emerged early on among its neighbors, Turkey managed to stave off the pandemic almost until the second week of March and gradually but urgently introduced measure after measure to minimize contact between people.
Addressing a videoconference with mayors on Thursday, President Recep Tayyip Erdoğan said the municipalities had important tasks in fighting against the virus. “We have to disinfect public buildings, mass transit vehicles. We have to be more sensitive in routine cleaning of the streets and should act meticulously for delivery of food and cleaning products to citizens,” he said. The president urged mayors to attend to the needs of people, particularly the elderly and students who should stay home. “By God’s will, we have the strength and capacity to defeat this outbreak,” he said.

“Our true weapon is isolation and three words are vital in this period: contact, distance and isolation,” Koca told reporters at a news conference Wednesday evening. Koca asked every citizen to adhere to the rules governing hygiene and social isolation while hinting at further travel restrictions. "The new epicenter of the pandemic has emerged as North America, according to what was discussed with the head of WHO during our conversation today," Koca added. The minister said the virus was “spreading faster” than other pandemics and they had not previously been aware of its speed.

Deaths have risen to 277 in Turkey, while the total number of cases has reached 15,679, Health Minister Fahrettin Koca said Wednesday, during a press conference following a Science Council Meeting on the deadly disease outbreak. The health minister said over 14,000 tests were conducted since the previous update on Tuesday afternoon, with 2,148 returning positive. According to the latest statistics, 979 patients remain in intensive care and 692 patients have been intubated. Meanwhile, 90 more patients have recovered, bringing the total number of those discharged to 333.

Koca also broke down the regional variations in the figures for the first time, adding that positive cases had been detected in all 81 of Turkey's provinces. Accordingly, Istanbul has so far accounted for 60% of total cases across the country, with 8,852 positive tests, followed by the Aegean port city of Izmir with 853 and the capital Ankara with 712 infections. These were followed by the central province of Konya (584), northwestern Kocaeli (410), the southern province of Isparta (268), northwestern Sakarya (207), southern Adana (197), the northwestern province of Bursa (135) and Black Sea province of Samsun (112).

Turkey has taken a series of measures to try to limit the spread of the new coronavirus, from closing schools, quarantining around 50 towns and areas and imposing a 24-hour curfew for people age 65 or older. The country has announced a new measure almost daily. Governorates were tasked by the government with taking measures specific to every province, from limiting entry to cities to expanding social distancing rules. Istanbul Governor Ali Yerlikaya announced Thursday that pharmacies will open later and close earlier. They will now operate between 9 a.m. and 6 p.m.

Interior Minister Süleyman Soylu pledged to restrict intercity travel further if travel rises. In a televised interview Wednesday, Soylu said the number of bus trips already dropped by 99% and should be used only by those with emergencies. Domestic flights decreased to “a few a day” following the restrictions.

Experts warn that almost half of positive cases do not exhibit symptoms and call on the public to keep a safe distance from everyone, considering anyone could be a carrier. China announced 1,541 of its patients who did not have symptoms tested positive for the coronavirus, while Iceland also reported 124 cases with no evidence of the disease.

Speaking to the Sabah newspaper, professor İlyas Dökmetaş, head of the clinical microbiology department at Turkey’s University of Medical Sciences, says up to 30% of those infected with the virus do not exhibit any symptoms. “They pose a lesser risk for infection of others but they might infect others anyway. The cause of the rising cases in Turkey might be those 'ghost' positive cases which are particularly common in the younger population. Younger people who think they will not be infected and go out, ignoring social distancing, may be carriers and can infect the older members of their households. This is why it is important to wash your hands frequently, adhere to social distancing and wear masks,” he said.

Professor Ateş Kara, a member of the Health Ministry’s Coronavirus Science Board, says the virus can be transmitted in a span of 10 seconds. “You have to be careful about social distancing. Phone your friends and loved ones instead of meeting them in person. One positive case can infect five people, but if you comply with restriction measures, it can be reduced to two people,” he said.

Turkey has made remarkable progress in developing ways to fight the outbreak, including determining innovative approaches for achieving faster testing results, the country's industry and technology minister said Thursday.

"The Industry and Technology Ministry started its work before the epidemic reached global dimensions," he said, adding that Turkey has been closely following the pandemic's worldwide impact. Amid official efforts to stem the virus' spread, the Turkish government is providing support to institutes and researchers in the country working to find vaccines. Under the leadership of the Scientific and Technological Research Council of Turkey (TÜBİTAK), vaccine and drug development projects are being carried out.

"We held our first coronavirus-related meeting in this area while the virus was still within China, exactly two months ago," said Varank, adding that they went on to use a result-oriented approach. In order to make the process as fast and efficient as possible, a COVID-19 sub-platform was established under the coordination of TÜBİTAK's Genetic Engineering and Biotechnology Institute. Hundreds of researchers from 24 universities, eight public research and development (R&D) units and eight private sector organizations have been working diligently together. "The more we can flatten the disease curve, the greater the chances of scientific solutions coming into play," said Varank.

$82.4 million for the campaign

Turkey has raised TL 552.5 million ($82.4 million) in its national solidarity campaign to aid in the fight against the novel coronavirus, according to the campaign's official website.

The patriarchate declared a TL 300,000 donation (around $45,000) while the foundation that runs Syriac churches is gifting TL 100,000 for the “We are Self-Sufficient” campaign.

President Recep Tayyip Erdoğan launched the crusade earlier Monday, donating seven months of his salary to the initiative. He has underlined that the aim of the campaign is to provide additional support to low-income workers who are financially suffering from measures taken against the spread of the disease.