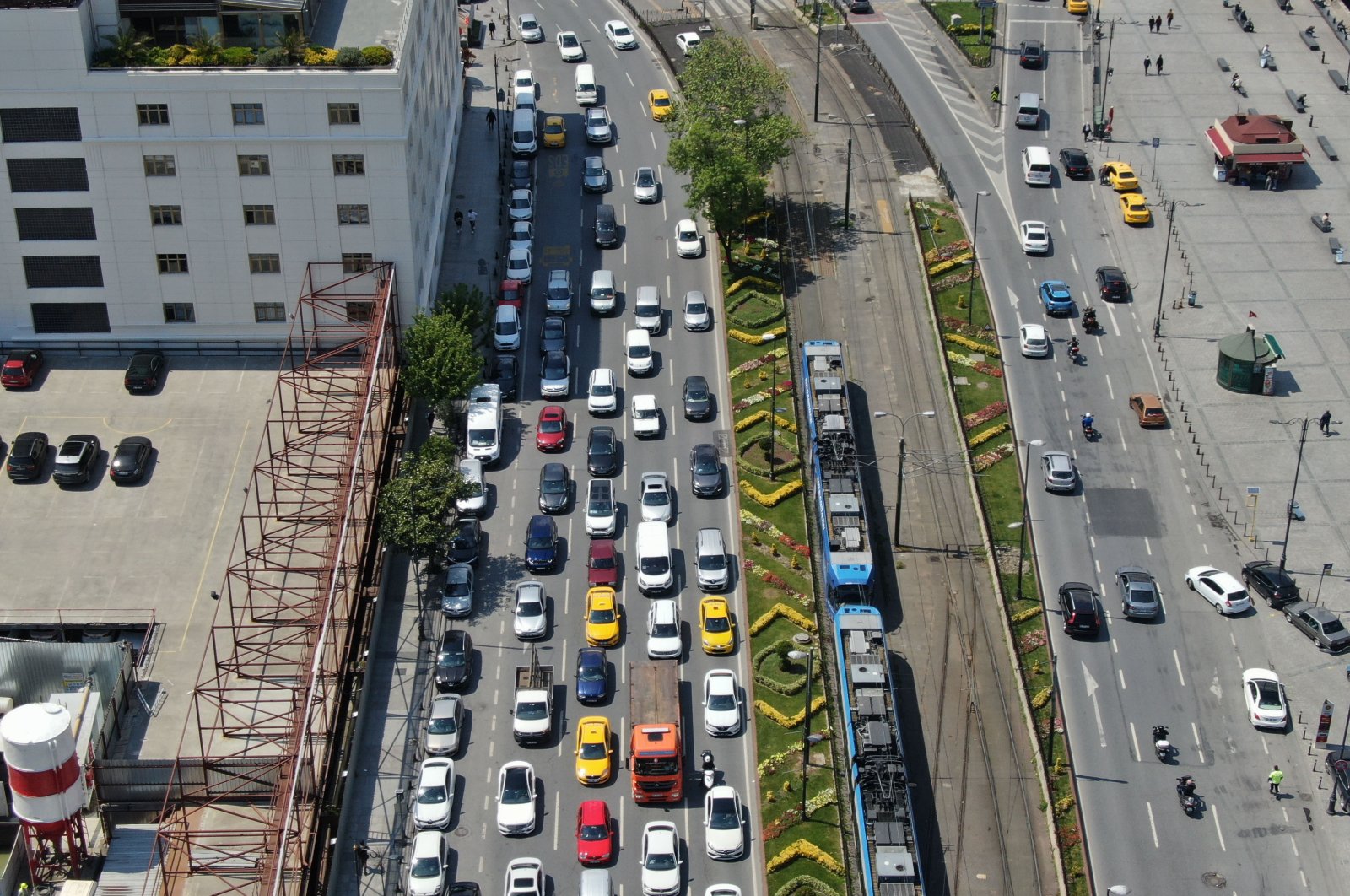 This photo of a traffic jam captured in the historic Eminönü district prompted Health Minister Fahrettin Koca to issue fresh warnings about the virus threat, Istanbul, Turkey, May 7, 2020. (DHA Photo)
by DAILY SABAH May 08, 2020 2:09 pm

Despite warning against premature celebrations and urging citizens to not give up on precautions, scenes of streets packed with cars and walkers prompted authorities to issue fresh warnings that the danger of COVID-19 still hasn’t passed

Health Minister Fahrettin Koca and experts from the country’s Coronavirus Science Board issued fresh warnings to citizens to not let their guards down against the COVID-19 pandemic after photos of heavy traffic jams and pedestrian traffic were sighted across Turkey’s busiest cities.

The minister issued his warning as he shared a photo of a heavy traffic jam taken in Istanbul’s historic Eminönü district on Thursday.

“Eminönü appears to have gone back to the days before the outbreak. Even with the traffic. Let’s not rush things as the outbreak crisis is improving. A car might be safe. Until you open the door and step outside,” the minister wrote.

As Ankara announced plans to return to normal life with the coronavirus outbreak seemingly under control, an increasing number of citizens were seen leaving their homes, where they have spent much of the past two months, when the country announced its first confirmed case on March 10.

During rush hour, traffic in the country’s most populous city Istanbul reached as high as 60% capacity for the past few days, according to Istanbul Metropolitan Municipality data.

It was not only the streets, however. Grocery stores, once left abandoned as people turned to online shopping during the outbreak, had difficulty coping with the increasing number of walk-in customers. Scenes of long queues in front of grocery stores became increasingly common across the country, with the Interior Ministry ordering a limit on customers inside the stores to halt the spread of the virus.

In his previous press conference, Koca said Turkey has brought the spread of the coronavirus under control but repeatedly warned that it did not mean the threat was over.

“The risk of the virus will linger for a long time. The coronavirus crisis is the first issue that has concerned all the countries across the globe since World War II, when 60 million people died. That alone tells us how difficult it is to return to life before the outbreak. Therefore, the whole world agrees it is wrong to assume we can go back to our previous lives,” Koca said on Wednesday.

The minister said the post-outbreak era, when restrictions would be eased, will be aptly named “Controlled Social Life.”

“We will leave our houses more often in the coming days. There will be a shift from house life to social life. But there should be rules and precautions in place in this new lifestyle. 'Controlled Social Life' is a summary of these precautions. It is a new lifestyle for spaces where we gather as social beings. We are transitioning into a free but cautious life,” he said.

While Koca and the other experts reiterate caution at every possible opportunity, it was undoubtedly the falling number of new coronavirus cases that gave the citizens a false sense of security and prompted them to leave their homes for some semblance of normalcy.

According to the Health Ministry data on Thursday, people recovered from COVID-19 nearly made up two-thirds of the total number of cases, as the number of recovered patients reached 82,984 with 4,782 new recoveries in the past 24 hours.

The number of patients in critical condition fell as well, with patients in intensive care units falling from 1,278 to 1,260.

“We will soon reach 1.5 million tests done. The number of new cases declined after yesterday’s (Wednesday’s) increase. Deaths, patients in intensive care units are declining as well. We need to overcome the crisis with determination and precautions. We have proven that it’s not hard to achieve results,” Koca said after Thursday’s numbers were published.

With new coronavirus cases falling day by day, Turkey on Monday unveiled moves to bring life back to normal.

For the first time in weeks, senior citizens, children and teens will be allowed to go out for four hours, although just for one day. Barbershops, hairdressers and shopping malls will also be allowed to be opened but with specific measures to protect against the coronavirus.

Shopping malls, barbershops and some stores will be allowed to open on May 11 as long as they abided by normalization rules, including allowing a limited number of customers inside with strict hygiene and social distancing rules.

Turkey also lifted coronavirus travel restrictions for Antalya, Aydın, Erzurum, Hatay, Malatya, Mersin and Muğla. Entrance and exit bans will stay in place for the remaining 24, which includes Turkey's economic and cultural hub of Istanbul and capital Ankara, for 15 days.