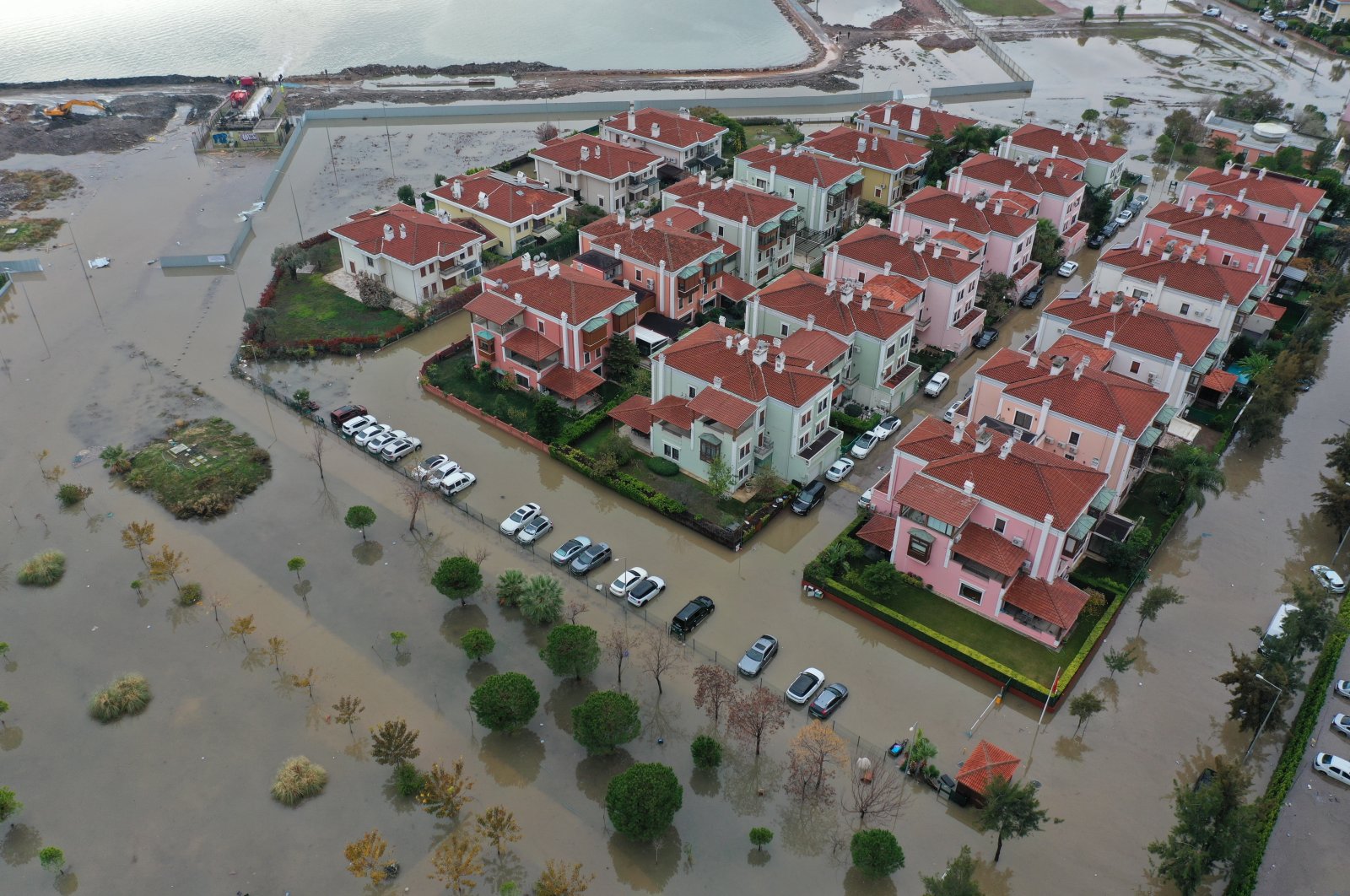 A cluster of buildings surrounded by waters from overflown sea in the Karşıyaka district of Izmir, western Turkey, Dec. 14, 2020. (AA Photo)
by Daily Sabah with Agencies Dec 14, 2020 11:26 am
RECOMMENDED

Turkey’s third-largest city İzmir has been battered by heavy rainfall since last week. Four days of precipitation led the Aegean Sea to overflow, inundating some residential blocks in the Karşıyaka district. Two people trapped in a car that was carried away by floodwaters elsewhere in the city were found dead on Monday morning.

The floods were particularly devastating in the Mavişehir neighborhood, where the waters of the Aegean Sea overflowed the shore and swept through the streets, submerging vehicles. The area affected by the surge lies on swampy ground and subsidence over a decade caused the area to remain below the sea level, causing sea flooding during storms.

A weekend curfew due to the coronavirus pandemic prevented casualties, but the floodwaters reached the doorsteps of multistory buildings in the district. Fire trucks blared sirens to wake up people who were sleeping when the sudden onset of rainfall turned into flash floods, calling on the public to save their cars from being submerged. Floodwaters also led to the collapse of the retaining wall of an apartment complex in the Buca district, heavily damaging 20 cars parked next to the wall.

In the rural Menderes district, five people traveling in a car were caught in floodwaters while they were trying to cross a shallow stream that had overflown its banks late Sunday. The driver and two passengers managed to get out in time, but two others in the vehicle were reported missing. Search and rescue crews and divers rushed to the area to locate the missing persons. The car, carried away by roaring waters, was found about 800 meters (875 yards) away from where it was hit by the floodwaters. The bodies of the two missing men were found on Monday morning, broadcaster NTV reported.

Floods also hit the southern province of Antalya over the weekend. No casualties were reported, but the flooding wreaked havoc on farmlands and greenhouses, particularly in the Serik district where greenhouse agriculture is common. Some residential areas in the Muratpaşa district have also seen houses and shops flooded. Firefighters vacuumed up floodwaters while locals worked to clear the debris left by the flooding yesterday morning.

Hazım Karahan, whose first-story apartment in the Güzeloba neighborhood was flooded, said he had to “swim” out of his apartment. “The water reached neck-deep in five minutes. I had to swim my way out and fainted when I left home,” he told Anadolu Agency (AA) on Monday.