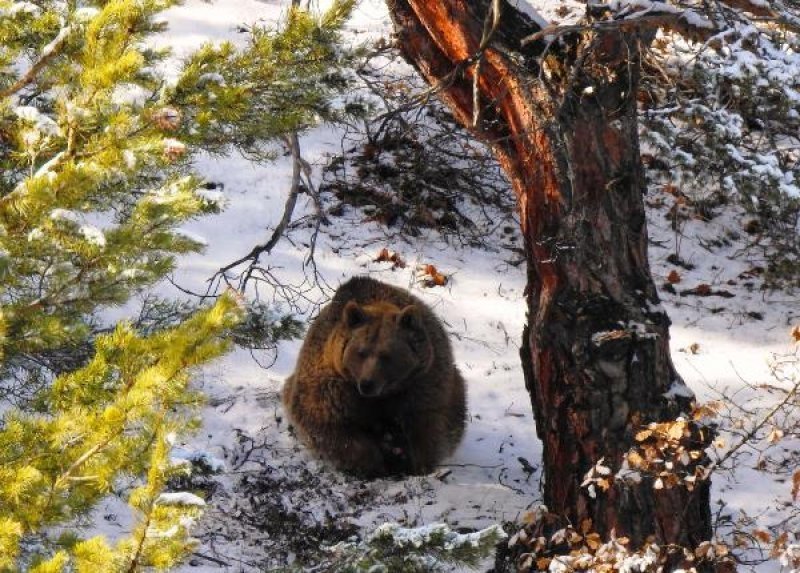 It might be a sleepless winter for both bears and humans in eastern Black Sea region. The bears' hibernation period is overdue, but they are still a common sight in rural parts of the region where their population is concentrated.

Climate change is the main culprit for breaking this routine in their lives, according to experts. As temperatures have become warmer than in past years in the region, bears tend to remain active instead of going into metabolic depression. This inevitably leads to more encounters with humans.

Locals have reported multiple attacks by the animals especially at empty houses in remote villages and highlands, where people living in more populated areas migrate to spend the summer. The makeshift wooden houses are often found damaged by bears looking for food. Authorities warn locals not to leave any food behind in their summer residences.

Recent studies show the number of bears has increased in the provinces of Rize, Trabzon, Artvin and Giresun. Their natural habitats are occasionally disturbed by people building sheds in remote areas, but their contacts with humans are still rare. As residential areas encroach on their natural habitats, bears seek out easy-access food in those places. In two villages near the Çamlıhemşin district, 25 houses were damaged by bears looking for food in recent weeks.

Burhan Yıldız, a villager who resides in the city in winter, found his house was trashed by bears when the village headman alerted him. He said there have been frequent bear attacks on houses in recent years.

Professor Şağdan Başkaya, a wildlife ecology expert from Karadeniz Technical University (KTÜ) in Trabzon, said the bear population has been on the rise both in the region and in other regions of the country. "Not every bear hibernates. If the seasonal temperatures are fine for them and if they can find food, they will roam around. If winters become warmer, we will see more bears preferring not to hibernate," he told Demirören News Agency (DHA) Wednesday.

Başkaya said the bears can smell honey, cheese and butter left in the summer houses and called on locals not to leave any behind if they do not want their houses damaged. "Bears do not tend to go to towns or villages for food, but this trend must be something also linked to an increase in their population. Unfortunately, we see more human-bear encounters, and since 2009, more than 20 people have been killed in those encounters and some 100 people were severely injured," he said.