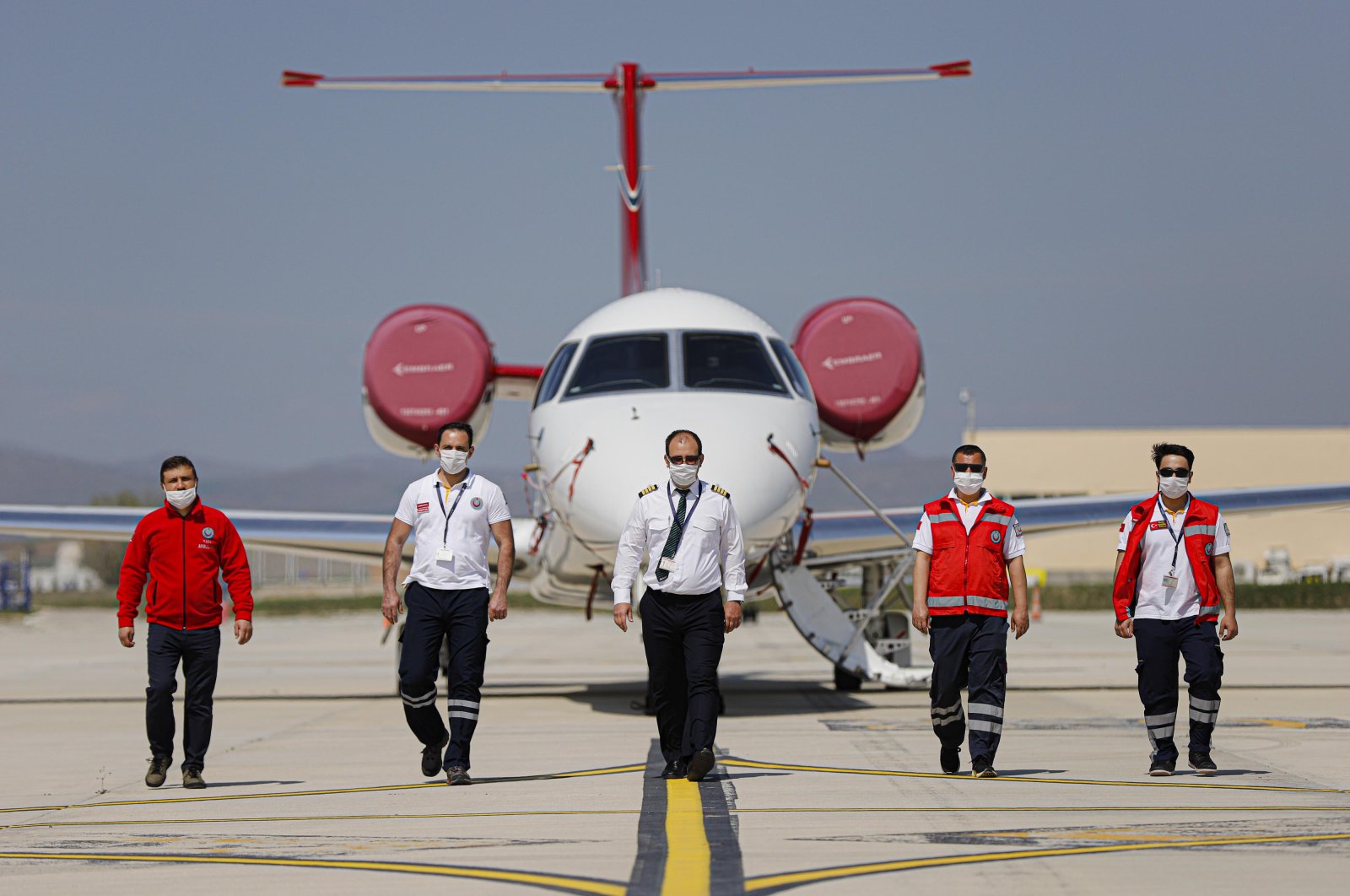 Turkey’s army of health care staff fight tirelessly against the COVID-19 pandemic. Air, ground and sea ambulances are this army’s key assets for a fast response

Medical services are often taken for granted and health care workers do not see the same appreciation attributed to other heroes such as soldiers and police officers fighting crime and terrorism. Yet, the COVID-19 pandemic shows just how essential they are in the lives of millions facing a foe only health care workers can manage.

Turkey’s fleet of ambulances makes up a major part of its health care army striving to respond to coronavirus cases faster.

Air ambulances, in particular, made headlines earlier this week while bringing a Turkish coronavirus patient home from Sweden, where he could not receive proper treatment. Since 2008, Turkey is the only country in the world offering free air ambulance services to its citizens, according to the Health Ministry. So far this year, 664 Turkish citizens with various illnesses have been transported by the government. Most recently, on Tuesday, a Turkish student suffering lung problems was repatriated from Russia by an air ambulance.

Speaking to the Sabah newspaper, air ambulance crews say foreigners are puzzled over free ambulance services. Ali Göksu, a paramedic working in an air ambulance for the past 12 years, says airport staff in places they fly to are surprised when they hear about the free service. “Once, in a country we traveled to, airport personnel asked me if we were there to 'airlift someone rich or famous,' and he was amazed when I told him it was free for every Turkish citizen. Though they are ill, patients smile when we arrive to take them to Turkey,” he recounts.

Pilot Gürcan Yıldırım says they take off in no more than 90 minutes when Health Ministry staff issue a call to duty. “Seeing his or her country send a plane for him or her only really lifts the spirits of patients,” Yıldırım says.

Yıldırım was among health care staff sent to China’s Wuhan in February to transport a Chinese coronavirus patient from Turkey. “It was a 44-hour flight and we are told the patient had an infectious disease. We had to take this risk but I believe this helped delay coronavirus’ emergence in Turkey,” he says.

Dr. Alim Gasanov, who works in an air ambulance capable of transporting four patients at the same time, believes it is a rarity in Europe. Gasanov, who accompanied Yıldırım to China, says he might be very well the first Turkish doctor to respond to a coronavirus case. Gasanov says they took protective measures and, along with the Chinese patient, flew other suspected cases to Germany and Saudi Arabia.

On the ground, ambulance crews work long, tiring shifts in Turkey’s battle against the pandemic. Crews working at the 112 emergency hotline are first responders to coronavirus cases, literally at the forefront of the battle.

In Istanbul, described as Turkey’s “Wuhan” by its Health Minister for the city's high number of cases, 287 ambulances work for the emergency hotline and each has three staff working around the clock. Waiting by the radio and phones at its command center, crews have to be quick despite having to don protective equipment at all times. When they arrive where the coronavirus case is reported, they hand out masks and gloves to patients first, before questioning them about their complaints. Patients with COVID-19 symptoms are then taken to the hospital and if a patient needs oxygen during the trip, ambulance crews provide it en route. Along with coronavirus cases, crews also have to transport patients with other illnesses and injuries and are now tasked with the extra duty of disinfecting ambulances after each patient and changing protective gear for every call.

Paramedic Alperen Gazi Öztürk is a member of such an ambulance crew in Istanbul’s Bahçelievler district. “We work 24-hour shifts and rest for the next 72 hours. We have to wear gloves, masks and suits while heading to every suspected COVID-19 case. It is a difficult job. You can have all the energy in the morning but as the shift progresses, especially toward the end, you feel exhausted – physically and psychologically,” he told Demirören News Agency (DHA) on Wednesday during a shift.

Yiğit Durdu has been a paramedic for three years and likes his job. He says that the outbreak made patients they visited more stressed out and they have had to lift their spirits. “We see a growing number of cases but also a growing welcome from patients we visit. I am happy to be received warmly at patients’ houses and this motivates me. Some people serve food to us, others give a warm smile. People are stressed and we help them to overcome it. I believe these days will be over soon if we support each other. We already see a drop in the number of cases,” he says.

Ambulance driver Aziz Kılınç, meanwhile, complains about other drivers on the road. “People talking on their cellphones behind the wheel, ignoring other cars and ambulances, driving recklessly delay our response to cases,” he says. Kılınç also longs for his family, from whom he had to separate from as a precaution amid the outbreak. “Thank God, we have a place to go. The state gave us accommodation at hotels, dormitories or guest houses,” he says.