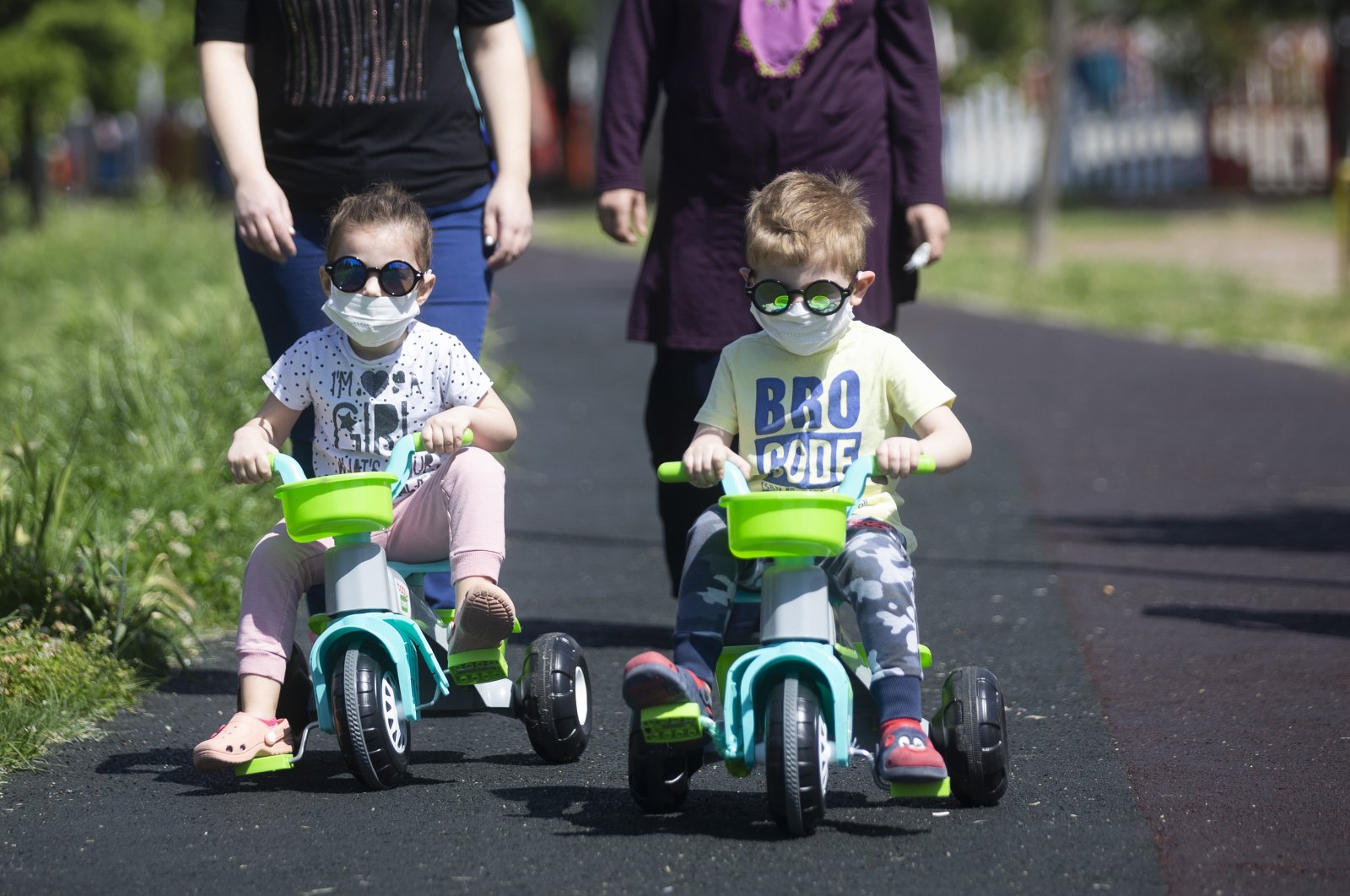 Two children ride their tricycles in a park after children aged 14 and under were allowed to go out within walking distance of their houses as part of eased coronavirus restrictions, Edirne, Turkey, May 13, 2020. (AA Photo)
by DAILY SABAH May 13, 2020 3:11 pm

After spending nearly two months in their homes, children across Turkey finally got to play outside as part of Ankara’s plan to ease curfews placed on the country’s youth and elderly

For the first time in many weeks, streets across Turkey echoed with children’s laughter coming from nearby parks Wednesday, as families were allowed to take their children aged 14 and below outside for the first time since Ankara announced a curfew for youth in early April.

The decision to allow children to go outside between 11 a.m. and 3 p.m. on May 13 was one of many moves Turkey is taking to bring normalcy to life with the coronavirus outbreak under control as the number of new cases continues to decline.

The government initially imposed a curfew for the country’s senior citizens, ordering anyone aged 65 and above to stay home. The curfew was later extended to include youth aged 20 and below, as the number of coronavirus cases increased dramatically.

However, new infections across the country have been on the decline since April 21, prompting Ankara to ease some of the restrictions placed on daily life. According to Health Minister Fahrettin Koca on Tuesday, 1,704 new patients tested positive for the coronavirus in the past 24 hours.

The number marked an increase from Monday’s figures, however, it still showed an overall downward trend in new case numbers. Meanwhile, the number of people who recovered from COVID-19 approached 100,000 with 3,109 new recoveries reported Tuesday as those who survived their brush with the virus now make up nearly 80% of all coronavirus cases in Turkey.

The improving outlook of the outbreak prompted Ankara to cut back on the measures, even though Turkey never resorted to the draconian measures Europe had to take, despite having dramatic spikes in new cases in late March.

But it is still too early for celebration, authorities say, as they repeatedly warn against interpreting the easing of restrictions as a return to normal life. Hours before the free time for children kicked in, health and education ministers wished the children fun during their time outside but urged parents to remain cautious.

Education Minister Ziya Selçuk warned parents that children should spend their time outside in parks and nature, not visiting relatives or meeting with friends.

While it’s unclear whether citizens paid attention to Selçuk’s words or if parents naturally turned to parks to let their children burn off pent-up energy, the scenes across the country painted the picture the minister hoped for: parks bustling with children.

Children were overjoyed to be outside the boundaries of their homes and spend a nice spring day in the park.

“When I was playing with the ball at home, it used to hit all the things around the house. It’s nice to play outside. It’s nice to allow children to go outside even for a few hours. I came straight to the park after having a nice breakfast,” said 10-year-old Azra, who went to a park in Istanbul with her father.

Others longed for their friends and school.

“I missed my school, my friends and going outside. But I can’t go outside anymore because of the coronavirus,” said Sare, an elementary student.

Her mother, Betül Ataş, said she and her daughter were happy to be outside.

“We spent the last two months inside the house but we made good use of the time. We did things and our family ties improved. We saw the positive effects of it (isolation). And today, we are happy. I hope our country and the rest of the world leave this crisis behind as soon as possible,” Ataş said.

While the majority of parents and children showed they were ready to abide by the rules of a new lifestyle where donning a face mask when stepping outside and keeping a distance with even your closest friend would be the norm, Minister Selçuk offered a vague answer as to whether schools would reopen before the semester is over.

Answering the question through social media, Selçuk said opening schools would mean mobilizing 18 million students and another million teachers, which would only be done when they believed it was safe to do so.

“As Minister of Education, it is my sincerest request for citizens to not regard opening of schools as a simple date. Opening the schools means leaving the house and coming back to their families for 18 million students and a million teachers,” he wrote in a statement.

“There is only one answer to when the schools will open: when it is safest to do so for our children, teachers and our families. Scientific data will tell us when and how will it be done,” the statement read.

Turkey on March 16 closed educational institutions across the country and introduced distance learning as an early precaution to halt the spread of the coronavirus. Last month, the closure of schools was further extended to May 31 and the ministry is expected to make an announcement in the upcoming days.