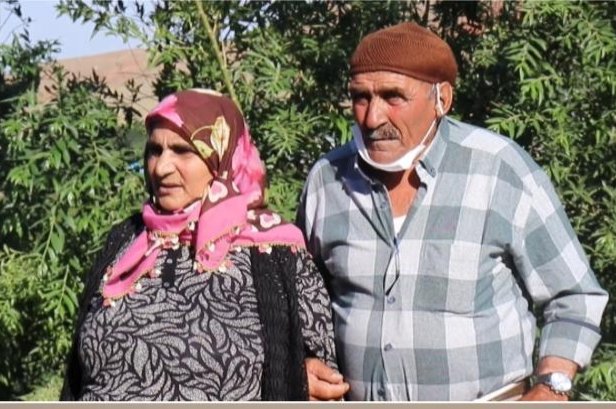 A brother and sister separated 75 years ago were reunited in eastern Turkey, and now a documentary is being made about their touching story.

Hanım Turan who lives in Izmit in northwestern Turkey recently found out that she had a brother one year older than her. The two met for the first time in Kağızman, a district in the eastern province of Kars, more than 1,300 kilometers (808 miles) away.

Turan, born in Kars, was handed to her grandmother by her mother when the latter divorced from her husband while pregnant. Ihsan, her 1-year-old son, stayed with the father. Neither father nor mother spoke to each other after the divorce and hid the truth from their children. Turan was just 16 when she left Kars for Izmit after her marriage while Ihsan was raised by his uncle after his father died when he was 3.

Ihsan Köker discovered the existence of his sister when his uncle Yusuf spoke about her just before his death in 2006. The only clue Turan had was Yusuf’s words: “Your sister has stepsiblings in Izmir (province); find them.” It took another 10 years before Halime Nazik, Ihsan’s daughter, found Turan’s stepbrother Yaşar in Izmir. She called the number she took from Yaşar, but Turan refused to believe her despite repeated calls, thinking someone was playing a prank on her.

It was only when her journalist son Orhan Turan found out about the calls that a possibility of reunion emerged. Turan reached Köker’s stepdaughter, and his personal investigation revealed the truth. He managed to convince his mother to meet her brother, and in August the tearful reunion took place.

“My mother left my father when he decided to take a second wife. I wasn’t born yet. She left me to the care of my grandfather and married someone else. I never knew I had a brother when I was in Kars. I knew my father died but heard nothing about a brother,” Turan says.

Ihsan Köker says he knew he had a sister after his uncle spoke about her on his deathbed. “My daughter called her a few times but she did not believe and told her not to call again. It all changed when Orhan reached out to us,” he says.