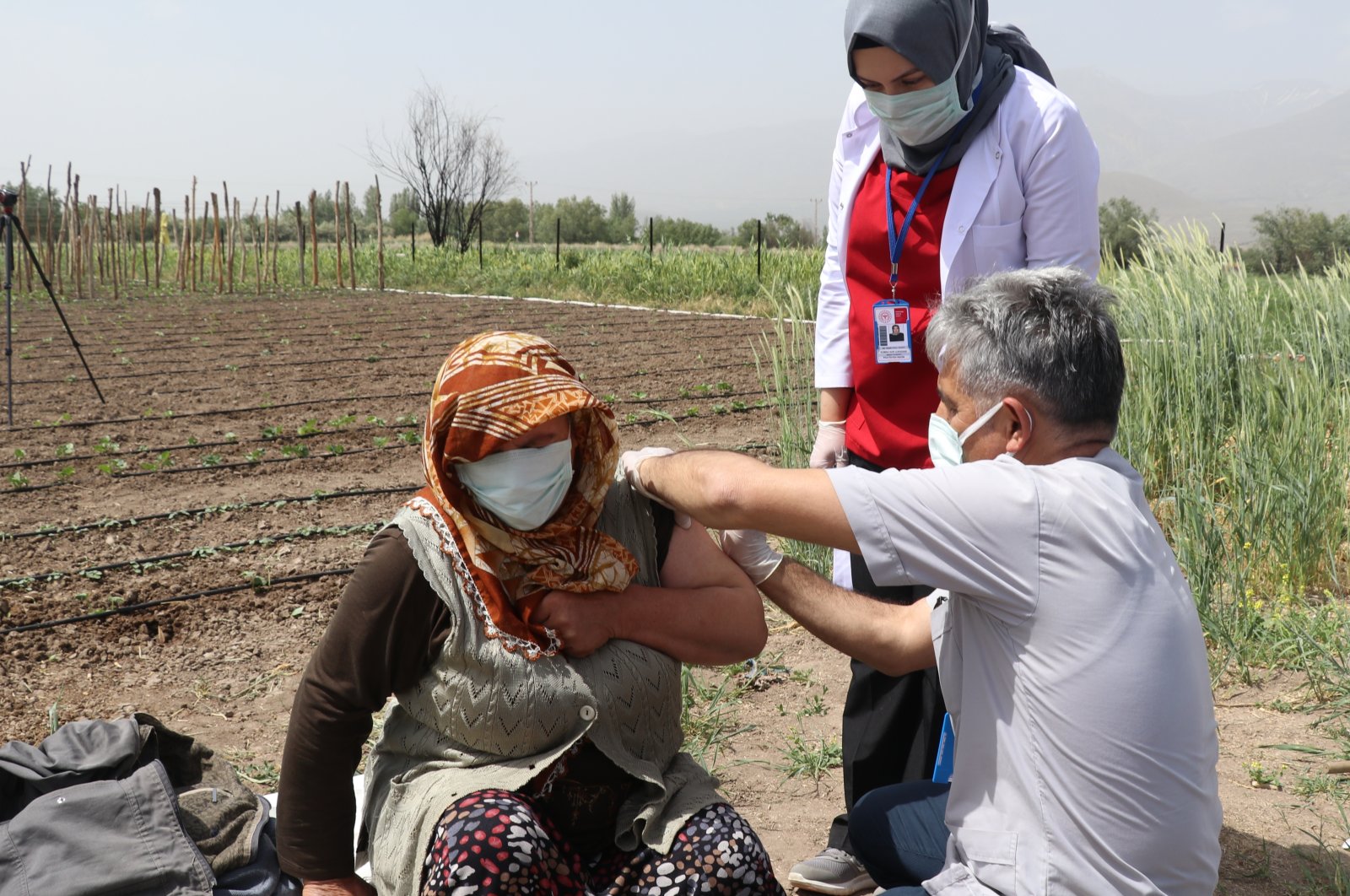 Turkey, striving to reach out to all eligible for vaccines in a nationwide inoculation campaign, has started tracking down farmers and laborers unable or refusing to have their jabs, offering to vaccinate them in fields, farms and greenhouses

More than 28 million doses of coronavirus vaccines have been administered across the country, but Turkey’s struggle against the COVID-19 pandemic continues. Every day, vaccination crews pace the winding roads, brave chilling weather in the mountain villages or sweat inside cumbersome protective suits in warm Mediterranean villages to reach out to those unable or unwilling to leave home for jabs. The Health Ministry even started vaccinations for farmers toiling in the fields on site. Crews visit farmers reluctant to get their shots, hoping to convince them. Although rural areas are more secluded than big cities, the occasional cluster of cases – due to people ignoring rules – threaten gains against the pandemic in those places.

“We have no car, and we have plenty of work to do,” Vesile Ayan, a 60-year-old woman plowing her field in the eastern province of Erzincan says, listing reasons she did not book a vaccination appointment in the nearest town. Ayan and her husband Hüseyin had “guests” in their field on Monday as they were working. A vaccination crew visiting villages to innoculate those unable to leave home came across the couple and found out they were not vaccinated. Producing spare vaccines they had, they administered their first doses of vaccine in the middle of the field.

Dr. Kübranur Çukadar, a member of the vaccination team, told Anadolu Agency (AA) that they were looking for people aged 55 and above (the group currently eligible for vaccination) in the village when they saw Vesile and Hüseyin Ayan. “When they consented, we gave them the first doses. We are trying to reach out to as many people as we can,” she said. Çukadar said their main task was to vaccinate frail, elderly citizens unable to leave home or those with chronic diseases. “Vaccination is the only way to overcome the pandemic, along with masks, social distancing and hygiene,” she says.

Vesile Ayan says she was grateful to have her vaccine. “May Allah bless our state because it helped us,” she said.

Health Minister Fahrettin Koca tweeted on Sunday that seasonal laborers at the age of eligibility were administered shots in the fields and farms they worked at, sharing a video of workers having their doses in the western province of Bilecik.

In Antalya, where temperatures reached 34 degrees Celsius (93 degrees Fahrenheit), vaccination crews battled heat and skepticism in their bid for mass inoculation. From greenhouses to fields in this Mediterranean agriculture hub, crews persistently go everywhere to convince those avoiding jabs. Some 35 health care workers are engaged in placing calls to those who skipped their vaccine appointment, and when they fail to reach them or when citizens agree but are unable to go to hospitals or clinics, they travel to villages and towns to administer their shots. So far, they have managed to convince 4,240 people to get their vaccines. Dr. Gülbahar Arslan and her crew of three health care workers go from village to village, from greenhouse to greenhouse in the Aksu district. “We have many greenhouses here in Aksu and people usually work here as it is harvest time. We try to convey to them the importance of getting vaccinated against the pandemic, and if they agree, we have spare shots in our bags and inject them wherever they are,” she told AA.

Necati Pınar, a 56-year-old worker at a greenhouse, succumbed to the persuasive talk of crews and finally decided to make an appointment for June. He says he was surprised to see health care crews coming for him.

Aysel Kurt, who was picking tomatoes at a greenhouse when a vaccination crew showed up, also consented to have the shot. “I couldn’t convince her, but doctors did,” her husband Salih, who already had his two doses of vaccine, hailed. Kurt decided to maintain a separate room from his wife when she flatly refused to get her jab. Finally, a vaccination crew visiting their neighborhood in Antalya’s Serik accomplished the mission.

An exchange between the crew and Aysel Kurt demonstrates how unfounded rumors boost vaccine reluctance among people. “I don’t want it. I am scared of having a needle in my skin. I heard it had side effects. It gives shoulder pain. I am picking tomatoes every day and so, I cannot have it,” Kurt reasoned. Dr. Abdullah Topçuoğlu convinced her that the vaccine had minor side effects if any, and any serious effect can be alleviated with simple painkillers.

“People die of this disease. This is serious. The vaccine is the only way to end this,” he told Kurt. This time, Kurt said she did not want the “Chinese” or “German” vaccine, referring to CoronaVac and Pfizer-BioNTech, and said she wanted a Turkish vaccine. Topçuoğlu patiently explained to her that Turkish vaccines were still being developed and that the two imported vaccines were their only resource. “These vaccines are good and effective. You see, your husband had two shots and nothing happened to him,” he told her. Finally, Aysel Kurt consented, and to convince her further, the crew waited for half an hour with her, to show that there were no side effects.

“I was surprised to see them come all the way for me, in this hot weather. It really moved me. When they talked, I was convinced,” she told AA after her first shot. “They really work hard,” she added.