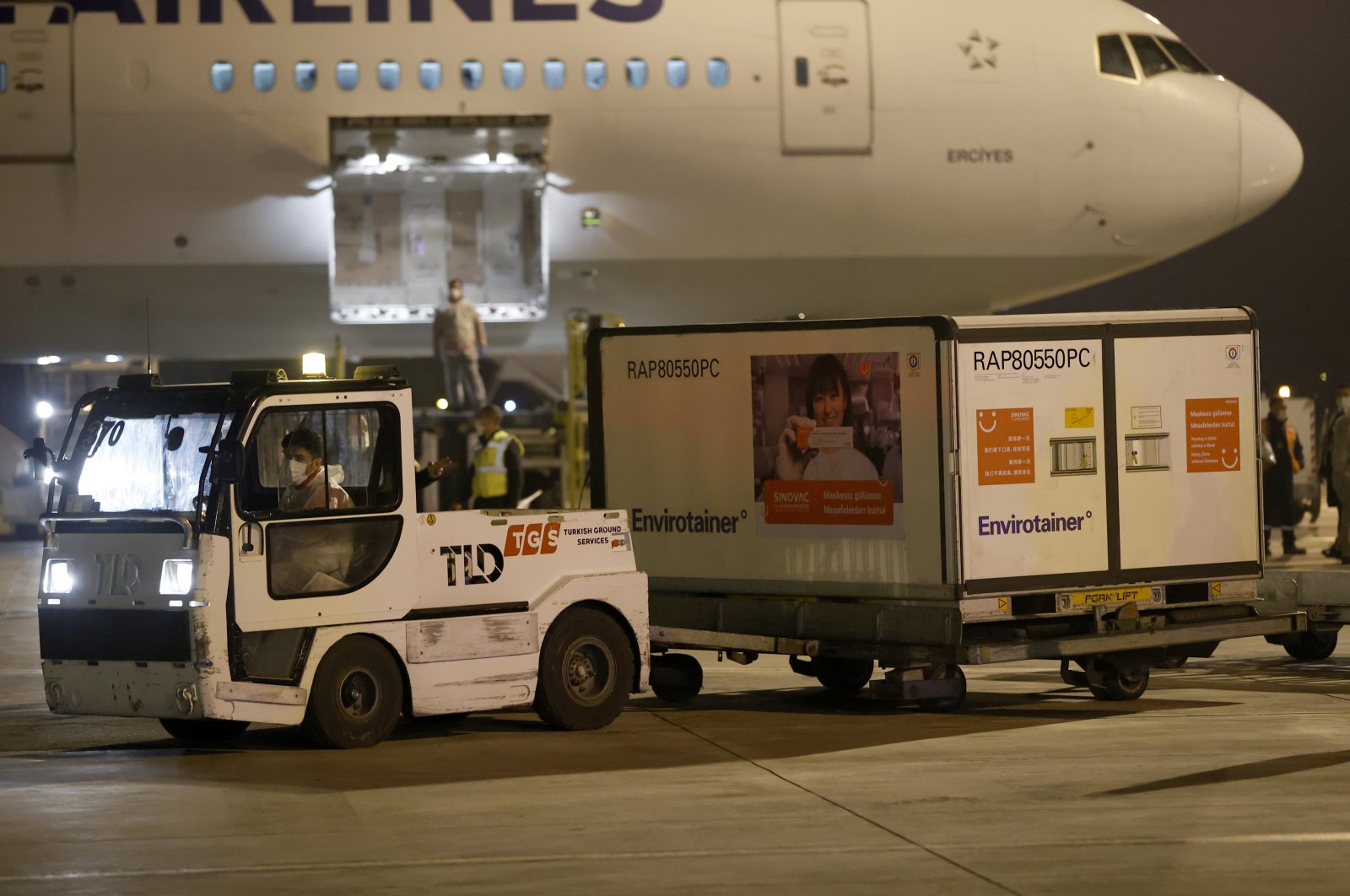 As Turkey received the first shipment of Sinovac's coronavirus vaccine, a doctor who volunteered in the phase 3 trials of CoronaVac shared his experience with Daily Sabah to stress the importance of the public's faith in science

More than nine months have passed since Health Minister Fahrettin Koca announced the country’s first coronavirus case, and Turkey is finally – and actually – close to seeing the light at the end of the tunnel.

The country is on the verge of kickstarting its vaccination campaign against the disease that brought life as we knew to a halt, forcing us into our homes and gutting the world economy.

The first shipment of Chinese pharmaceutical company Sinovac’s COVID-19 vaccine arrived in the country Wednesday. A Turkish Airlines Boeing 777 airplane carrying the first shipment consisting of 3 million doses landed at the Esenboğa Airport in Ankara in the early hours of the morning.

Health Minister Fahrettin Koca expressed his hope that the vaccines would mark the beginning of the end for dark times as he announced the imminent delivery of the shipments a few hours before the plane touched down.

What shall begin as a small challenge with the delivery of 3 million doses will soon evolve into a monumental task of vaccinating more than 80 million people, or at least 60% to 70% of the country’s population, to reach the threshold where herd immunity will protect the rest.

To fortify the vaccine stocks, Turkey also struck a last-minute deal with Germany-based BioNTech for up to 30 million doses of its vaccine co-developed with U.S. pharmaceutical giant Pfizer. While the delivery of the full amount will be spread throughout 2021, several million doses will come in partial shipments to boost the campaign.

There is also hope that a domestically made vaccine currently undergoing human trials will be available for production by April.

But while the long-awaited solution to the problem that has killed more than 1.7 million people across the world has arrived, people are now having doubts about vaccines and their safety. The increasing anti-vax movement – fueled by social media – has cast a dangerous shadow in people's minds and poses a real and sinister risk to all science has achieved so far.

Once targeting unwitting social media users with unfounded and false information about vaccines for diseases like measles and chickenpox, the fearmongers now muddy the waters by sharing so-called facts about coronavirus vaccines with next to no scientific backing.

The reservations people have about vaccines can most of the time be a legitimate concern, and when it comes to coronavirus vaccines, there are questions born out of the undeniable fact that the clinical trials that usually last several years at best have been completed in mere months due to the unprecedented nature of the pandemic.

But does that actually mean they could cause severe, unforeseen side effects?

One in a million chance, says associate professor Halil Can Gemalmaz, who was one of the doctors who volunteered for the phase 3 trials of Sinovac’s CoronoVac vaccine and has since developed antibodies that render him immune to the coronavirus.

In an interview with Daily Sabah, Gemalmaz said those who are maliciously or unwittingly scaring people about vaccines are usually talking about one in a million occurrences where a person’s immune system overreacts to a foreign agent and ends up harming healthy tissue while trying to contain and destroy the foreigner.

While Gemalmaz specializes in orthopedics and doesn’t claim to know as much as an infectious disease expert or a virologist, he still followed the research papers about coronavirus vaccines closely before he decided to volunteer.

“When someone gets the (CoronaVac) vaccine, they can have one or several of the rare and mild side effects. Those include a faint pain in the arm that received the vaccine, slight fever, fatigue or headache. These usually appear soon and go away quickly. They are side effects directly related to the vaccine, but they don’t cause any major inconvenience.”

“But,” he said, “these vaccines, including the BioNTech one, cause immunity by triggering the person’s immune system. That’s the point.”

And according to Gemalmaz, it is the rarest of odds that lead to the horror stories turning people off from vaccines.

“We keep hearing those stories a lot. ‘So-and-so had a vaccine shot and became partially paralyzed,’ they say for example. What is happening here is that their immune system is having a cross reaction against a foreign agent and damaging healthy tissue as well, neural ones in this case.

“It can also damage joints or muscles when that happens. But the important thing to remember is that the immune system reacts to any foreign agents in the body, not just the vaccines,” Gemalmaz said as he explained the coronavirus itself is a foreign agent that infects the body and it could very well trigger a similar reaction.

Explaining that allergic reactions were a type of immune response as well, Gemalmaz said the overwhelming majority of the people in the world could eat hazelnuts without problems, but a minority could go into anaphylactic shock that could kill them within minutes.

“That doesn’t make hazelnuts bad. There is no evil Nutella lobby.”

Stressing that the odds of those severe autoimmune reactions happening was around one in 100,000 to a million, the doctor said since those reactions happen so rarely and take time to appear after the inoculation, no study has been able to prove direct causation between them and the vaccines.

“I highly doubt the fearmongers have even seen such a case in person. They usually quote something they heard from someone else and scare people without having any actual knowledge,” he said.

Answering a question about how he decided to become a volunteer for the studies, Gemalmaz said as a doctor, he knew the coronavirus pandemic wouldn’t be over with the conventional methods deployed so far, not without bringing vaccines to the table.

And knowing that Sinovac’s vaccines were developed with a method that has been used in vaccine production for years, he said it was too good of an opportunity to pass up, with practically no risk involved.

“I was notified that they were accepting volunteers at the hospital I work at, and I realized there was no reason to pass up on an opportunity that arrived at my doorstep. Of course, around half of those vaccines were placebos, so the most I had to lose was I wouldn’t get the immunity and I would have to wait for the mass vaccinations to start to get the real one,” he said.

“Was that a brave decision? No, if you look at how this vaccine is made.”

The CoronaVac vaccine uses a more traditional method that involves injection of inactivated or rather killed viral particles to teach the immune system how to respond to the live virus without risking a serious disease response. Meanwhile, the vaccines developed by Moderna and Pfizer use the mRNA method.

“This vaccine uses the same technology that has been used for the past 15 years. Apart from the inactivated virus, it contains the same chemicals that have been used in other vaccines in similar ratios,” Gemalmaz said, reiterating that each country’s health authorities would also collect random samples from shipments to test for any chemical composition to make sure nothing unwanted would be in them.

“When the vaccines arrive, the Health Ministry will inspect the samples whether they include any chemicals that shouldn’t be in a vaccine or if the ratios are correct for those allowed compounds.”

“Only then the vaccinations will start.”

And the Health Ministry did exactly what Gemalmaz said. As soon as the aircraft carrying the doses landed, Koca announced the start of a 14-day testing period at the Turkish Medicines and Medical Devices Agency (TITCK).

“As soon as the tests are finalized, our vaccination campaign will be launched by the General Directorate of Public Health. We will succeed together,” Koca wrote on Twitter.

Not just over yet

Saying that the development of vaccines was critical, Gemalmaz warned that it is only one part of the fight against the pandemic. The other is vaccinating enough of the population without wasting too much time.

“We would need to reach 60% to 70% immunity rate in a timely manner. Research shows the coronavirus antibodies don’t last long. Recent findings point to around a year before a person loses their antibodies and therefore their immunity to the coronavirus,” he said.

Gemalmaz said after the threshold was reached, the rest of the population that didn’t receive a vaccine would automatically be protected as the virus wouldn’t have a clear pathway to infect them – in other words, herd immunity.

“But there is the issue of travel. No single country in the world is a closed box. Some countries will carry out successful vaccination campaigns. Some won’t. And we could have travelers that bring fresh waves of infections with them. That’s why the travel policies governments will implement in the upcoming months will also be important,” he said, pointing out to a potential vaccine passport some governments are considering.

For Gemalmaz, humanity has completed the most important part of the fight, but it is still too early to celebrate. With nearly 8 billion people in the world, there simply won’t be enough vaccine immediately to reach herd immunity and vanquish the virus from the face of the earth or at least confine it to smaller clusters.

And with studies saying immunity lasts for around a year, a lengthier vaccination campaign where people get regularly inoculated could be a necessity, even if would be costly.

“It is still too early to tell when this will be over. But we might need to keep our vaccine campaigns going on longer than we wish. It would be both costly and problematic since not everyone will want to get vaccinated every year," he said.

“Would I want to get vaccinated again next year? Not if possible.”