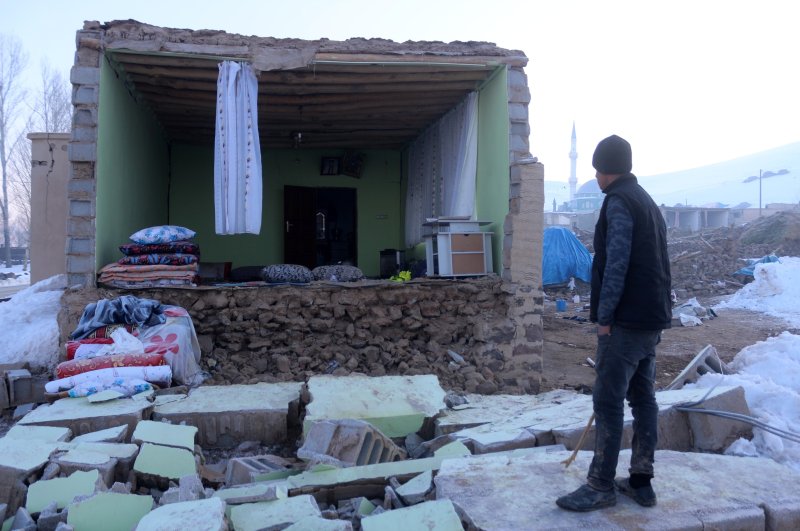 A day after two Iran-based earthquakes which razed Turkish villages near the border, locals assess the damage and bury their dead while the government sets up a lifeline for those affected

Little remains of the villages on Turkey’s border with Iran after two large-scale earthquakes struck near the Iranian town of Khoy on Sunday. Hundreds of houses, most built with unsecured adobe bricks, collapsed in earthquakes that killed nine people. On Monday, villagers gathered outside the ruins of their homes, dismayed at the damage, yet letting out a sigh of relief for their own survival. Funerals were held for the nine victims while government agencies delivered aid to the survivors.

Among those left homeless in the wake of the earthquake was Hüsnü Araslan, a father of eight living in the village of Özpınar in Başkale, the most affected district in the province of Van, where eight people were killed. Araslan was outside taking his livestock to graze when the earthquake struck. He ran back home and pulled his wife and his two sons, the only people at home, from the rubble of his two-story house. “I saw a cloud of dust rising above the village and fell to the ground. I got back on my feet immediately and ran to the village. I still can’t believe how I pulled my family from the rubble,” he told Anadolu Agency (AA) on Monday. Along with his house, Araslan lost his stability in the earthquake. “Everything we had at home was buried under the rubble. We have nothing, not even clothes. I also lost 30 of my animals. Still, I am glad we are alive. I’m only worried for my neighbors who lost their lives. We are homeless in the middle of winter, but we still feel lucky,” he said.

Authorities announced that 250 houses and 300 stables were destroyed by the earthquakes and 700 houses were heavily damaged in the disaster that hit Özpınar, Güvendik, Kaşkol and Gelenler villages.

The Disaster and Emergency Management Presidency (AFAD) and Turkish Red Crescent sent crews to the villages and set up tents for survivors who lost their homes. Mobile kitchens also serve meals for the victims while more aid delivery is underway.

On Monday, funerals were held for nine people at a mosque in central Başkale. Interior Minister Süleyman Soylu and local authorities attended the funeral ceremony for Reis Furat and his four children and four others who died in the earthquake.

AFAD announced that at least 66 aftershocks followed the earthquake, which hit 5.9 on the Richter scale and that the group had sent more than 1,200 tents, beds and heaters to the disaster zone.

Murat Kurum, minister of environment and urbanization, told AA on Monday that some 13 villages were affected by the earthquake. He said the ministry’s crews were at the scene to see how to help the survivors and they were working on plans to build new houses for villagers. Kurum pointed out that 71% of populated areas sit on earthquake zones, a reminder of a recent succession of earthquakes in western Turkey’s Manisa and last month’s deadly earthquake in eastern Turkey’s Elazığ.

“Earthquakes show us that it is not the disaster that kills people but the quality of buildings. Most buildings that collapsed in the earthquakes that struck Elazığ and Manisa were built with mudbricks. Others were decrepit, lacking in engineering and constructed using low-quality material. You don’t see any collapse from buildings built after 1999,” he said, referring to the year of the deadly earthquake in northwestern Turkey which claimed the lives of thousands of people. Turkey has seen an overhaul of construction regulations in light of that earthquake in order to ensure the sturdiness of buildings.