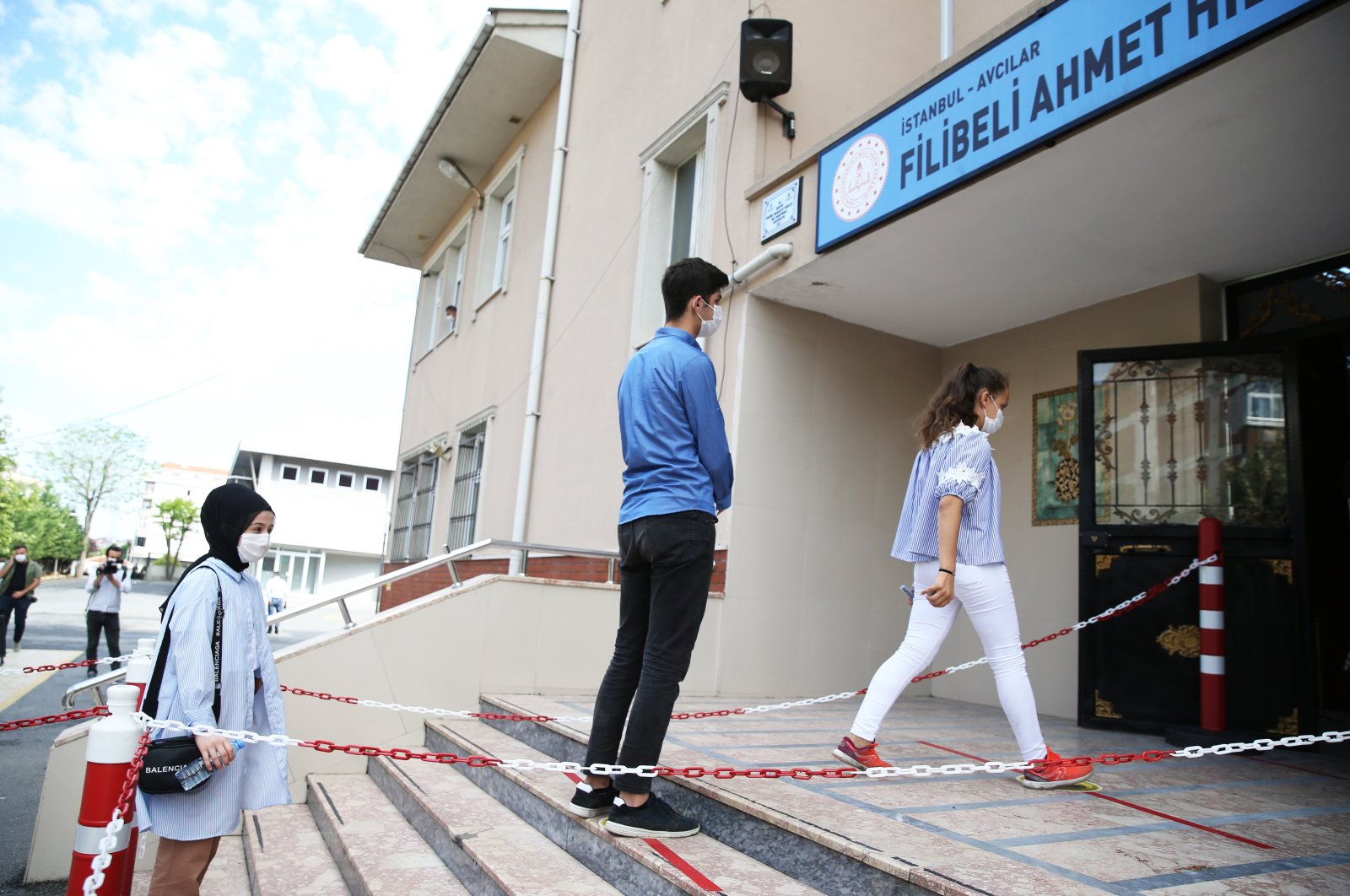 Students with face masks practice social distancing as they form a queue to get inside a school to take the high school admission exam, Istanbul, Turkey, June 20, 2020. (AA Photo)
by Can Kazancıoğlu Aug 09, 2020 11:05 am

Despite several ministries offering detailed and lengthy COVID-19 precautions at educational institutions, parents sending their children to class are still uncertain how the semester will unfold

After closing their doors on March 16 and switching to online education for the remainder of last semester, schools across Turkey are preparing to welcome students back into classrooms on Aug. 31 for the new academic year.

Even before then, most private schools will restart classes as soon as next week to make up for time students lost when they were confined at home during lockdowns to prevent the spread of the coronavirus.

Throughout the summer, however, one question has remained in many parents’ minds: Will it be safe for children to go to school amid the COVID-19 pandemic?

Back when Turkey announced its first coronavirus case on March 10, the Education Ministry was one of the government agencies that took thes swiftest action. Despite switching an online education model to ensure the safety of students, mass disinfection was carried out in millions of schools across the country. Although they were scarcely occupied, municipality workers clad in white suits went from one institution to another to sanitize the buildings where at least some administrative staff remained to manage the transition to online education and take care of the paperwork.

While the initial phase of the outbreak was worse than expected, Turkey still managed to bring the crisis under control, and facilities had to be ready if the ministry deemed it was safe for students to return to classrooms. That did not come to pass, however, as the government opted to play it safe, announcing that schools would remain shut for the remainder of the spring semester.

On June 19, the 2019-2020 school year was officially declared over, and millions of students for the first time received their report cards online.

That did not stop the Ministry of Education from immediately drafting plans for the next school year. They convened regularly with the country’s Coronavirus Scientific Advisory Board to determine necessary precautions while watching daily infection numbers.

The idea that students would return to schools for the fall semester seemed more realistic as days went by. Experts believed that while Turkey’s online education platform was good, it was still vital for children to get used to discipline as they grow up, which the campuses excel at providing.

Parents need classrooms to open as well. Those who still have to go to the office have found themselves in need of a relative or a caretaker to look after their children. Others lucky enough to work from home were not spared from inconvenience either, as parents soon found out it was hard to concentrate while their children turned into bouncy balls because of the unspent energy they had.

By early July, Selçuk was giving clear signals of the ministry’s intent to reopen schools, and on July 26 he confirmed that students would be going back to classrooms.

A day later, the Ministry of Education signed a cooperation deal called “Hygiene and prevention of infection guidelines” with the Ministry of Industry and Technology that spelled out an expansive list of precautions that would be taken at schools.

Explaining the deal, Selçuk said precautions were tailored to each school across the country. A team of more than 2,000 people was created for the sole purpose of inspecting the individual specifications of campuses, and the draft measures were approved by the Turkish Standards Institution (TSE). Procedures were then further optimized after discussions with the administrative staff of each campus.

“We don’t want to enforce any measures with just an outside observation. Each school should also assess themselves and report their requirements,” Selçuk said, adding that the final processes were decided after both reports from the ministry and the institution itself were compared.

To keep schools informed of any changes depending on the outbreak’s course, a software program was implemented nationwide, which also serves to educate staff on how to properly carry out any newly implemented plans.

In addition, an inspection team was formed and trained in line with TSE guidelines to review campuses throughout the school year for compliance and flag any violations.

A similar guideline was prepared to educate parents and children about how to better protect themselves, as well as offer up-to-date information regarding the ministry’s announcements.

Apart from the Education Ministry’s precautions, another set of measures was announced by the Ministry of Health. In early July, it listed the general precautions that would be carried out across all schools without exception.

Students will have their temperatures checked as they enter campuses, and they will only be allowed in one by one to avoid creating crowds.

Halls will have disinfectant dispensers mounted on walls. Visitors won’t be allowed inside except for urgent situations. Staff will hold meetings via teleconference to avoid gathering in meeting rooms.

Classrooms will have students’ desks spaced 1 meter (3.28 feet) apart, while the general occupancy of the school will be limited at one person per four square meters.

Cafeterias will have tables spread out, and students will go there at different times. They will be required to disinfect their hands before and after entering. Food and beverages will be served with disposable plates and cups.

While the Health Ministry’s lengthy list of precautions appears to cover everything, the applicability of some of them has been questioned by experts.

One of them is how realistic it is to expect kindergarten or elementary students, children between the ages of 4 and 9, to put on a mask, let alone keep it on for several hours. Some primary school teachers have voiced concerns that it will be nearly impossible to keep them on children, especially the younger ones, as they lack discipline and are unable to comprehend the seriousness of the situation due to their age.

Their concerns are shared by at least one member of the Coronavirus Scientific Advisory Board.

Tevfik Özlü, a member of the board, said it would be “really difficult” to ensure compliance with mask and social distancing among younger students. He said a hybrid teaching system where students come to school for a few days and switch to online classes for others would ensure better safety.

The hybrid system could also be the key to another major concern for educators: crowded classrooms. While most provinces across the country have more than enough space to accommodate all students, some schools, especially in remote villages, are trying to figure out how they will distance students from each other without leaving anyone behind.

While the Education Ministry did not confirm a hybrid system, it also did not rule it out yet. In his previous statements, Selçuk said such a process was one of the many backup plans the ministry kept in reserve if the situation worsens. He also didn’t rule out the closure of schools and said students might be switched to online education in some provinces depending on case numbers.

While a switch from on-campus to online education could introduce problems for working parents, another major question is tuition fees for those who choose to send their children to private schools.

It is no secret that private education can cost a small fortune in Turkey, just like in the rest of the world, depending on the school and the location of the campus. Yes, they teach the same curriculum determined by the ministry, but parents pay big sums to have their children have access to a broader set of activities and campuses with better facilities.

A switch to online education will mean many of those benefits will vanish overnight. While private schools argue that their online classes would be broader than that of the ministry’s, parents appear to disagree.

After the ministry announced schools would remain closed for the rest of the academic year, many parents demanded partial refunds from the private schools where their children were enrolled. In the end, schools agreed to refund fees for cafeteria and school bus services that were no longer being offered but rejected a payback of tuition fees, arguing that they still offered sufficient value in their own online platforms, and to show parents they got their money’s worth, they also decided to open classrooms earlier than public schools to make up for the lost time.

With a whole education year under threat of the pandemic, however, many parents were left pondering: How much make-up time would the private schools need if the academic term is interrupted early?