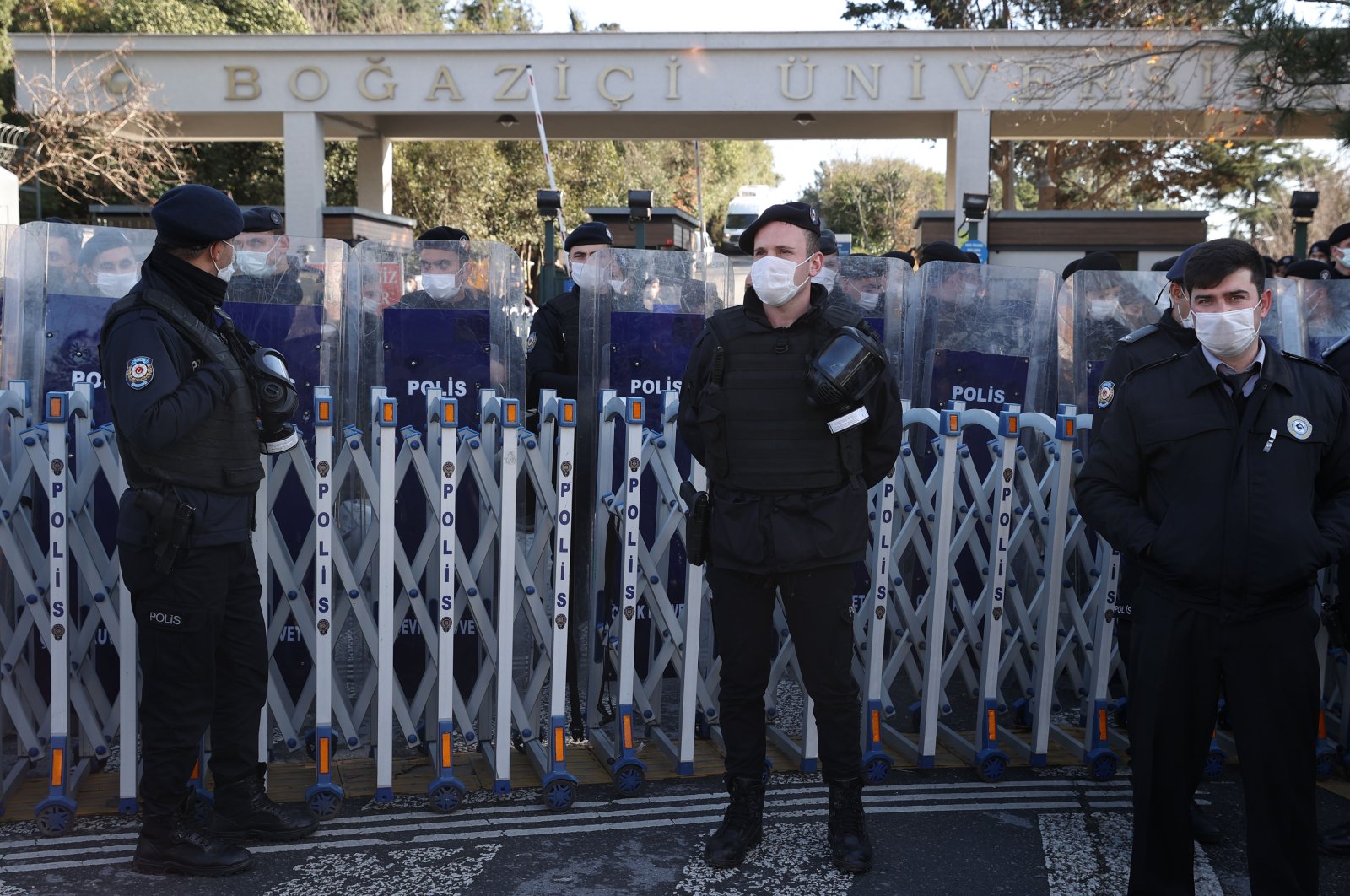 Istanbul this week saw protests by opponents of Melih Bulu, the newly appointed rector of the prestigious Boğaziçi University. President Recep Tayyip Erdoğan’s decision to appoint the professor as the new head of the institution sparked a row over what opponents claim is an “appointment of a trustee” to the university, and the ensuing two days of protests were marked by demonstrators clashing with police at the campus.

Erdoğan on Friday told reporters that “terrorists” were involved in the protest while answering questions about whether he would meet with students opposing the appointment.

Police detained 40 suspects during and after the protests on charges of ignoring a ban on gatherings and resisting officers. Among them, 12 had links to terrorist groups including the PKK and the Revolutionary People’s Liberation Party-Front (DHKP-C), while others had links to fringe far-left groups. Another 21 suspects were referred to a court Friday in Istanbul.

“This is something involving terrorists. Those who joined (the protests) were not students. Melih Bulu was appointed to Boğaziçi in line with laws," Erdoğan said after Friday prayers in Istanbul.

Bulu, who once sought nomination for Parliament under the ruling Justice and Development Party (AK Party), tried to reassure students there would be an unbiased, apolitical approach to the administration of the university in a string of interviews following his appointment on Jan. 2.

Interior Minister Süleyman Soylu echoed Erdoğan’s sentiments regarding terrorists hijacking the protest. Soylu said at an event Friday in the western province of Izmir that the incidents were the work of “people linked to terrorist groups who were not students of Boğaziçi, people who wanted to show Turkey as a non-democratic country."

"We won’t fall into this trap. We have seen (rioters) breaking the university’s gate. We should have been talking about science projects by Boğaziçi University but instead, our security forces were targeted," Soylu said.

The president has appointed dozens of rectors to universities all across the country since he took office in 2014. The president was given the authority to appoint rectors in 2016, yet few have faced such staunch opposition as in Boğaziçi. Bulu’s predecessor Mehmed Özkan, who was appointed in 2017 by Erdoğan, had also faced protests branding him a “trustee,” a term used to describe state-appointed heads of municipalities or companies whose directors or owners are under investigation for wrongdoings.

The opposition to Bulu's appointment mainly lies on the argument that he was not a member of Boğaziçi's academic staff and only completed his postgraduate studies there, in addition to calls for the re-introduction of rector elections as it was carried out prior to 2016. The former system also led to constant debate over YÖK's supervision of candidates and results, along with the president's authority to appoint one of the top three candidates.

Boğaziçi University, founded in the 19th century as Robert College, was the first American university outside the United States. It is often the highest-ranking institution in the country in terms of scientific research and academic success. Until 1971, its rectors had been American academics.

The university, whose alumni include celebrities, tycoons and two former prime ministers, has been a hotbed of demonstrations in the past, including protests against Turkey’s military operations in northern Syria in 2018.