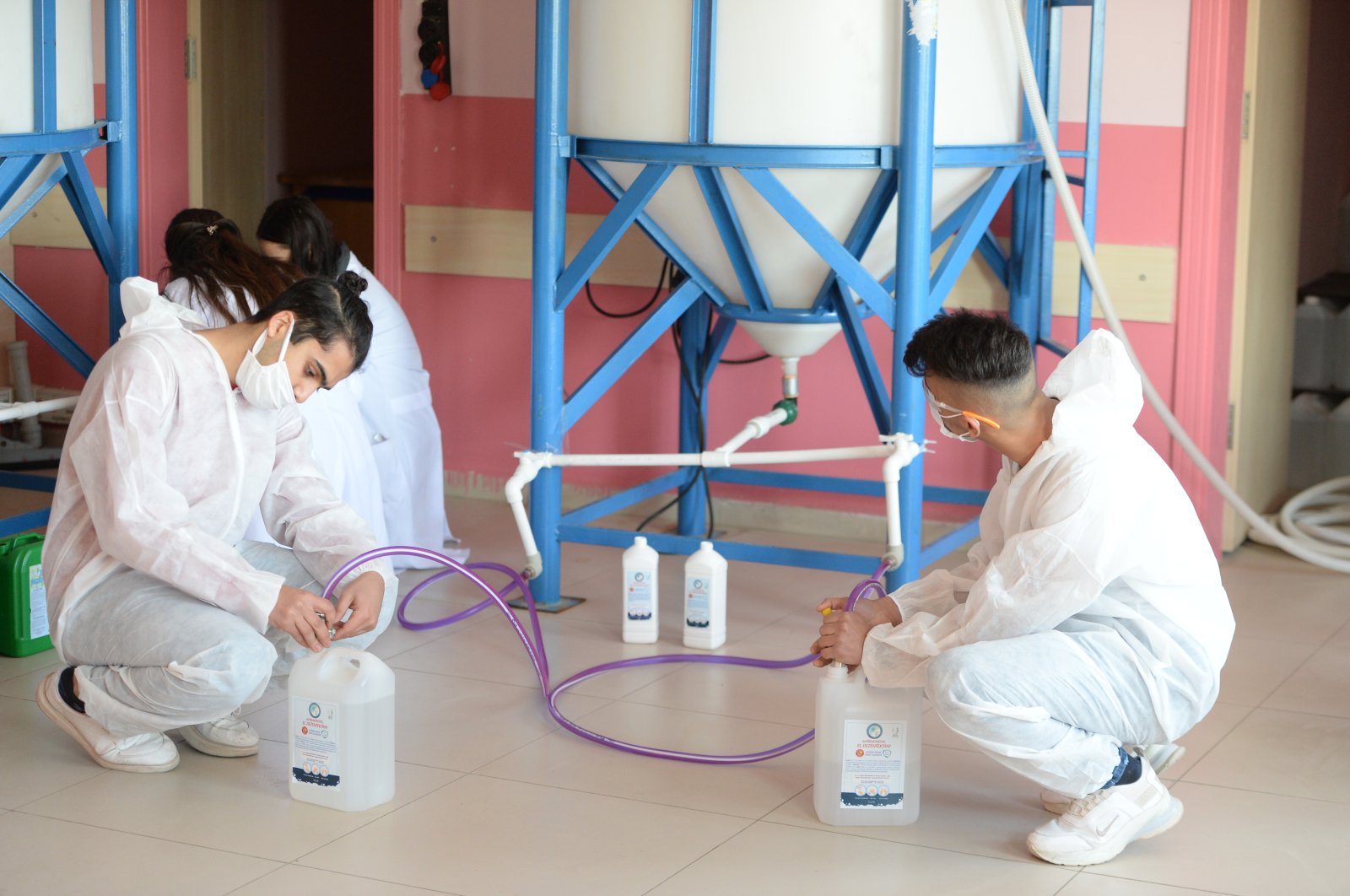 In a learn and earn scheme, the nation's hands-on training institutions have evolved into manufacturers as an overhaul of facilities has boosted revenues from products made there to TL 157 million ($20.7 million)

Dressed in white overalls, a group of young and adult workers fills plastic cans with sanitizers and surface cleaners. The place is no different than other small workshops at the Organized Industrial Zone in the southeastern province of Mardin, except it is part of a vocational high school.

The young workers are high school students and the older ones are teachers. Fehim Adak Vocational and Technical Anatolian High School is among hundreds across the country that taps into the mass production potential of schools. After all, what better way than production to give students a chance to put into practice what they learned at school?

Vocational high schools are the only schools in Turkey that remained open despite the coronavirus outbreak and for good reason. They produce masks and sanitizers, key ingredients in fighting the outbreak. Their growing revenues have now reached TL 157 million ($20.7 million) and bring some extra cash for the Turkish economy.

The Ministry of National Education oversees an ambitious project entitled "1,000 Schools in Vocational Training" to expand facilities and boost productions at these schools. This year, the schools' earnings increased 42% compared to last year with only 438 schools.

Next year, the government aims to reach the targeted 1,000. The project simply involves giving more means to existing schools, such as two new workshops for each of the remaining 562 schools. The ministry has invested TL 161 million in schools to improve infrastructure, and therefore production capacities, and enrich the learning experience for millions of students. Income from production mainly helps schools to be self-sustainable without relying on outside aid. Secondly, it offers a means of extra income for students and teachers.

Mahmut Özer, deputy minister of national education, told Anadolu Agency (AA) on Thursday that they sought to increase the quality of vocational training with the project. "We want all 1,000 schools to have circulating capital, to be able to sustain themselves. We want the students to have more practical learning opportunities and thus, helping them to find better employment when they graduate. In addition, we can now support them financially. In the first 11 months of 2020, students earned TL 11 million in total and our teachers earned another TL 25 million," he said.

The school in Mardin, or rather its department of chemical technologies, focuses on producing cleaners, something that became important amid the pandemic. Since May, students and teachers have jointly produced liquid soap, surface cleaners, hand and surface sanitizers and detergents. In seven months, they produced 137,000 liters of cleaning goods. The workshop has a daily capacity of 3 tons, and their products are delivered to other schools and public agencies in Mardin to cater to their cleaning needs. Fourteen students and four teachers work at the workshop.

Principal Ömer Çomaktekin told AA that the school, which was opened in 2016, had only four departments. In April, they opened the chemistry workshop with funds from the ministry and started the production of cleaning materials. "The value of cleaners, sanitizers, etc. we produced here reached about TL 1 million," he says.

Students are paid daily, between TL 120 and TL 160. "They come here in their free time, to work and earn both for themselves and to support their families," Çomaktekin says. The school now aims to launch mask production. "We want to contribute to the country's economy and improve the success of our students," the principal said.

Chemistry teacher Yasemin Güçlü oversees the production. She says they started out with surface cleaners, but students are now able to produce five types of cleaning materials. "We have three 1-ton tanks. Students both learn and earn money on the side," she said. "This is more like a science laboratory for them than a workplace. What they learned here will definitely help them when they launch their professional career in the future," she said.

The "1,000 Schools" project is part of those steps to improve education capabilities in more than 3,200 vocational and technical high schools. It covers about 600,000 students in 1,000 schools. Along with new workshops, the project involves additional facilities, from laboratories to new libraries at those schools, as well as different supportive education programs for the personal development of students.