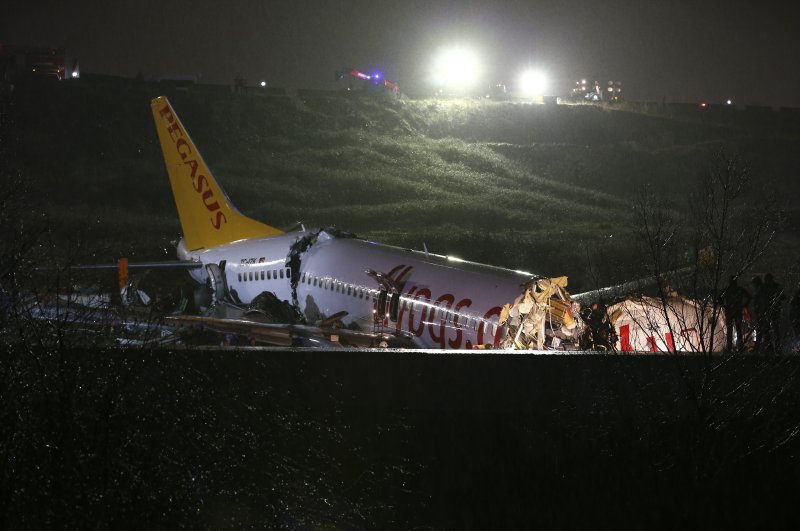 The wreck of a Pegasus Airlines Boeing 737 airplane lies in a ditch after it skidded off the runway upon landing at Sabiha Gökçen International Airport in Istanbul, Feb. 6, 2020.(AA Photo)
by DAILY SABAH Feb 27, 2020 4:30 pm
RECOMMENDED

Pegasus Airlines once again came under the spotlight after former staff at the budget airline alleged that the company pressured crew members into keeping quiet about technical problems they encountered during their flights.

The allegations were published by Turkish daily Sabah, a day after the same newspaper ran a story about how the airline ignored various memos from pilots and ground crew about technical problems with their aircraft.

Speaking to the newspaper, a former employee who worked as a flight attendant at Pegasus Airlines said that the company always prioritizes sales above safety, and the staff was put under pressure on a regular basis.

Saying that she began working as a lead flight attended for the airline in 2008, Nurcan Şen said she was abruptly fired in 2017 without a cause.

"There was always a 'sales first' mentality at the company rather than 'safety first.' Costs came before everything else. They cared more about concession sales than safety. We were constantly subjected to mobbing to increase sales. The intense working hours would make everyone careless, and when you told them you were unfit to fly, you'd be put under pressure to continue," Şen said.

Another lead attendant said the company dramatically reduced the time airplanes spent on the ground to cut costs, which also led the crewmembers to perform safety checks hastily, increasing risks.

"I started working (at Pegasus Airlines) in 2007. I was fired six months before my retirement without a reason. Crew members don't usually clean the aircraft unless it's absolutely necessary. But the company forced crew members to do it anyway. While aircraft of other airlines spend at least an hour on the ground, our time on the ground was reduced to 20 minutes. We were forced to deboard, board, clean and secure the doors in 20 minutes," Fatma Yenilmez said.

"I worked at Pegasus for seven years. I was fired without a reason. I couldn't even get my severance. The working conditions at the airline were really intense. We are required by law to fly no more than 110 hours per month, but the company regularly forced us to fly more than 120 hours. Instead of paying for extra crew members, they preferred to pay the trivial amounts of fines handed to them by the civil aviation authority. I remember one time they asked us to fly back to Istanbul with a malfunctioning radar on board," Tuğba Özgüle said.

"I was let go in 2018 without an explanation. I was working as an aircraft mechanic. The working conditions at the company were very harsh compared to other airlines. Pilots and cabin crews always looked exhausted. They were always pushing their employees' limits. Watching Mr. Nane's statements after the latest crash at Sabiha Gökçen airport, I felt like his tears were crocodile tears," Murat Samur said.

Three people were killed when a Pegasus plane traveling from the western city of İzmir to Istanbul crashed at Istanbul’s Sabiha Gökçen airport earlier this month. The plane’s pilot was arrested for causing death by negligence. The plane, which overshot the runway, skidded about 60 meters before dropping into a ditch from a height of around 30 meters, breaking into three parts as it came to a rest. The aircraft was 11 years old and had 177 passengers and six crew members on board.

In a statement after the crash, Nane had defended Pegasus' safety measures. "Our annual safety record is above European Union standards. All our pilots are constantly encouraged not to take any risks, to go around if they deem it risky or land in alternative airports if necessary. All our procedures are reviewed by civil aviation authorities each year. Our planes are 5.3 years old on average and technically solid. All of their maintenance is done in accordance with regulations. These sorts of accidents result from a combination of many factors. We vow to make any required improvements after the investigation has concluded," he said.