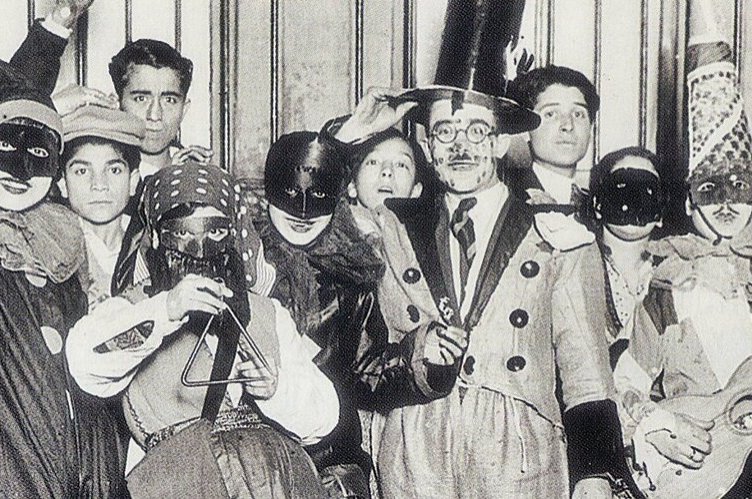 For almost five centuries, local Greek communities in Istanbul would parade through the streets of Şişli, banging drums and blaring clarinets to celebrate the carnival with street parties. (Photo by karnavaltatavla.org)
by Leyla Yvonne Ergil Feb 27, 2020 1:09 pm

This weekend Istanbul is set to host the colorful, multicultural and multi-religious 500-year-old Greek festival 'Baklahorani' with hundreds of singing, dancing and parading people in the streets to mark the start of Christians' 40-day Lenten period

Referred to as the Tatavla Carnival for the neighborhood of Kurtuluş in Istanbul where it was once held, Baklahorani is a celebration of the city’s multicultural communities to usher in the start of the Christian tradition of Lent that will be brought back to life this weekend.

The roots of Baklahorani, which translates from Greek into “I eat beans,” spans back to the start of the 19th century, when the city’s Greek and Armenian communities would come together and celebrate during the weeks leading up to Shrove Monday and the start of Lent. Lent is a 40-day fast in which Christians abstain from eating meat and other luxuries in commemoration of Jesus Christ’s journey into the desert for 40 days. As a result, Christian communities all over the globe pay tribute to this sacrifice by holding extravagant celebrations leading up to Lent, referred to worldwide as “carnivals.” In Istanbul, the tradition is not that much different as members of the Christian community hold parades and parties that are open to and attended by the city’s residents of all creeds. Thus, Baklahorani was born.

The celebrations for Baklahorani that took place in Istanbul were as unique and diverse as the city itself, with different Christian communities marching in masked parades, while dancing and playing music, from their neighborhoods, to gather and cross the Golden Horn, walking from Pera to Kurtuluş, a neighborhood in Istanbul’s Şişli district that was once referred to as Tatavla and would host the ultimate celebrations that were the culmination of community parades. With the banning of mask-wearing in the 1940s, the Tatavla Carnival came to a halt. However, in 2010, in an effort to showcase the city’s wondrous religious diversity and multiculturalism, members of the Greek and Armenian Christian community brought the celebrations back and, this year, its revival is set to be bigger than ever.

Taking place over the weekend, the Tatavla Carnival will host dozens of activities of interest open to all intending to celebrate the city’s great history and harmony. Centered in the Kurtuluş neighborhood and starting on the evening of Friday, Feb. 28, the Tatavla Carnival will kick off with a special historical tour of the carnival and an opening concert, albeit these events are invitation-only. In fact, while there will be dozens of events held throughout the weekend, some will require preregistration due to space constraints while others will be held outdoors and open to the general public.

The actual celebrations for Baklahorani that are open to the public will kick off on Saturday with a Meze Şenliği, which will be a series of festivities held to celebrate the diverse cuisine in the city and in particular the various meze appetizers, which have unique preparations variant to the cultures they come from. Held on Saturday, Feb. 29, from noon to 6 p.m. at the Kurtuluş Elementary School Garden, there will be stands serving up mezes from the Greek, Armenian, Levantine, Suryani, Circassian, Georgian and Black Sea cultures coupled with seminars, book signings and concerts, such as a performance by Buzuki Orhan and his orchestra at 4:30 p.m. While the stands set up will be open to perusal, keep in mind that some of the panels and performances will require registration to attend.

Meanwhile, simultaneously on Saturday, there will also be a Tatavla Panayiri, which is an outdoor fair with concerts and stands that will be held on Duatepe neighborhood’s Şahap Street. There will also be a bus service that will transport participants between the two events throughout the day.

On Sunday, March 1, there will be a revival of the traditional Tatavla Parade, with participants encouraged to dress in costumes, wigs and masks. There will even be the opportunity to have your face painted between 1:30 p.m. and 3:30 p.m. by makeup artists at Tatavla Garden in Kurtuluş Son Durak. The parade will then set out from there at 4 p.m. and will march through the Kurtuluş neighborhood to end up at the Gürcü Vakfi grounds at the junction of Silahşör Street and Siracevizler Street where there will be festivities kicking off at 6 p.m. with folkloric dances and concerts held until 9 p.m. There will be musical performances by the bands Tatavla Keyfi, who plays Rembetiko renditions, and Vomank, an alternative group inspired by Armenian music. Adem Ekiz will be performing Greek music from the Black Sea region. Then, Kardeş Türküler, which are Turkey’s greatest representatives of the nation’s multiculturalism through music, will also take the stage.

Other highlights throughout the weekend include a number of cultural tours in the region and seminars on the history of the carnival, Istanbul’s cuisine, perfume and flavor and healthy eating habits. There will also be a very special “Get to Know Your Neighbor” party for children. This event aims for children to mingle and socialize with other kids of the same age of various cultures and creeds through games, storytelling, musical performances and dance shows that will take place Saturday. These particular events will also require preregistration, which can easily be done through the karnavaltatavla.org website.