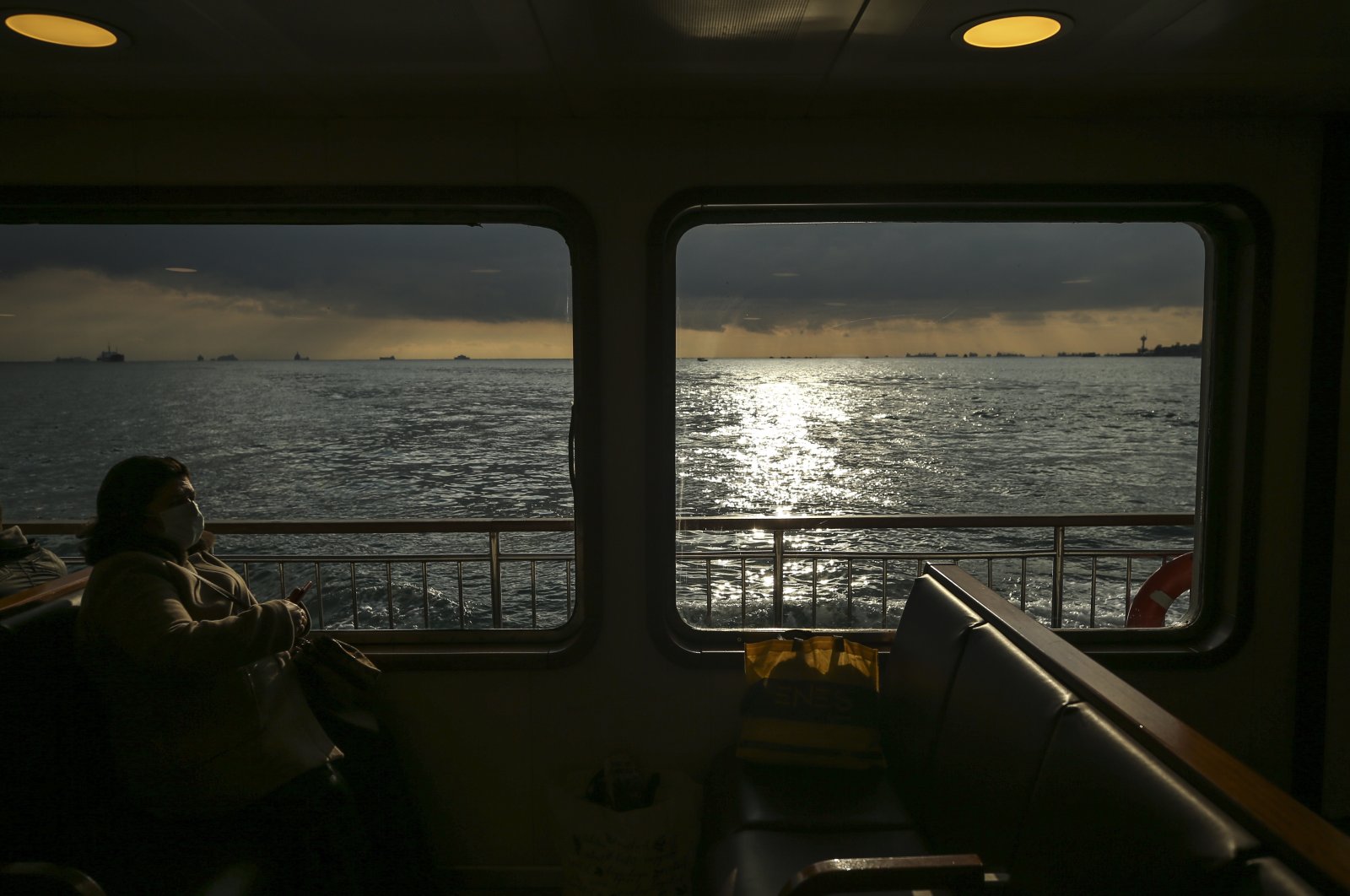 A woman wearing a mask travels on a boat over the Bosphorus Strait that divides Istanbul on European and Asian sides, Thursday, Jan. 14, 2021. (AP Photo)
by Leyla Yvonne Ergil Jan 21, 2021 1:45 pm
Edited By Yasemin Nicola Sakay

Two British expats living in the sunny Turkish south share their COVID-19 survival stories, how they adapted to the ‘new normal’ and the lessons they learned

With the wide expat community spread across Turkey, there were bound to be a few expats who have had firsthand experience with the coronavirus. Here are the stories of two fellow expats who caught the virus, managed to overcome it and can now share how the experience has been for them.

One expat I had the opportunity to speak with is 58-year-old Bernadette Erganlı, who hails from the U.K. and has spent the past 20 years in Turkey. She currently resides in Marmaris, a Mediterranean resort town of Muğla, situated on Turkey’s southwestern coast. Erganlı has been completing her time in quarantine after being quite ill with a bout of COVID-19.

When asked how she believes she may have caught the virus, Erganlı replied: “I was being careful and only going out for essentials. I only had one visitor to the house who had a child with them that was coughing quite heavily. He came on the Friday, and by

Monday, I could hardly swallow and had no voice.” Erganlı said she let them know and they had been staying home themselves by that point anyway. She also said she visited a doctor’s clinic a few days prior to falling ill and rode a dolmuş, a public transport minibus, so it is possible she could have contracted the virus there as well. “I just don’t know,” Erganlı said.

Erganlı said that on the following Thursday, which happened to be New Year’s Eve, she was really sick and made her way to the Marmaris State Hospital. Referring to the treatment there as “excellent,” Erganlı said that all COVID-19 measures were perfectly in place. In addition to being tested for COVID-19, she was given a chest x-ray, which showed she had pneumonia.

Erganlı was given medication and told to isolate for 14 days. “If at any time I felt I couldn’t breathe, I had to ring an ambulance,” Erganlı explained, adding, “Luckily for me, I didn’t have to.” She did have to isolate from her husband, who also had to quarantine for two weeks despite testing negative. They stayed in different rooms, and when they were in the same room, both would wear masks, a directive which was asked of her by the hospital. Luckily, Erganlı's husband never contracted the virus.

Erganlı says she is over the worst of it now but she lacks energy and has pains in her back. “I’m feeling OK, but still get exhausted doing small tasks,” she told me, adding that the telltale symptoms of loss of taste and smell have not returned yet either. “I really feel that if not for the hospital’s quick response and knowledge of this terrible virus, I would not have survived it. I am forever grateful for the wonderful care they provided,” Erganlı said. “I feel as though Turkey is dealing with this situation far more successfully than the U.K. I have lost four close friends to COVID-19 in the past two weeks from the U.K. and many more are positive.”

Tracey Gibson is another British expat who recently came down with and has since recovered from COVID-19. This 55-year-old U.K. native has been residing in the Çalış area of Fethiye, another port city and holiday hub in Muğla on the southern Mediterranean coast, for the past six years with her husband, Robert. After coming on vacation at least twice a year for the past seven years, Gibson said they decided to take the plunge, selling their home in the U.K. and permanently moving to Turkey. “I go to a spinning class three times a week, do yoga and have converted my spare bedroom into a gym so I try to keep myself fairly active. I had every intention of traveling around Turkey last year but due to COVID-19, this is now on hold until it's safe to do so," she said.

As for her experience catching COVID-19, Gibson said it started with a sore throat, a chesty cough and a fever on the evening of Dec. 28. While her sense of taste lessened slightly, she never lost her sense of smell. "Ordinarily, I would have said I had the flu, but because of COVID thought I ought to get checked out,” Gibson said.

She did so the following morning, arriving at Fethiye State Hospital at 8:30 a.m. “The test was very painless and quick – a swab at the back of the throat and nose, followed by a visit to the tomography department for a chest x-ray, I think because of the chesty cough I had.” About 40 minutes later, Gibson said they told her the x-ray was clear and she could go home and wait for a call to reveal the test results.

“By 4 p.m., I had a call to say I was positive and my heart sank,” Gibson shared, adding, “I was upset as I like to think I had kept myself safe, but not everyone has symptoms so I could have caught it anywhere.” By 5 p.m., a hospital representative and nurse arrived at the house to give her medication and to ask who she had been in contact with during the days prior to experiencing symptoms. In full hazmat gear, the pair also performed a COVID-19 test on her husband, which thankfully came back negative.

All of the contacts Gibson mentioned were contacted and visits were paid to their houses for testing. Fortunately, all of those tests were negative as well. Both Gibson and her husband were told to self-isolate for 10 days. “I got a telephone call from the doctor’s office every day asking how I was, as well as calls from Ankara," she said. She admitted these calls were a bit harder to navigate due to her level of Turkish, but the callers were checking to make sure she was OK.

“Plainclothes police also came by to check that we were at home and would telephone and say they were outside and to go to the gate, which I did. They would wave and ask if I was OK, and then left.” As medication, both Gibson and her husband were given favipiravir, and she was also asked to take an additional medicine that would prevent fluid from entering her lungs.

In addition to isolating at home, Gibson and her husband also had to isolate from one another as he tested negative for the virus. Thus, they had to sleep separately and sit as far apart as their living room allowed. They disinfected everything they touched, which they had been doing anyway, but were now fastidious in that task. “There is literally antiseptic and wipes all around the house,” said Gibson, adding, “We also opened doors every hour and made sure there was a window open the whole time.”

“I am now on the mend, and despite a lingering cough, I'm doing OK,” explained Gibson, adding that she is also slowly starting to exercise again. “Neighbors and friends have been amazing, from doing our shopping and leaving it on the doorstep to even providing meals, which was wonderful,” Gibson said. “It makes you realize what good friends and neighbors you have in times of need."

"I feel very happy with the level of care I received here in Turkey,” she added, pointing out that when a couple of her family members in the U.K. caught the virus, “they were just told to take Paracetamol and did not receive the daily calls I did from the doctor.”