Feed your wanderlust with these travelers in Turkey 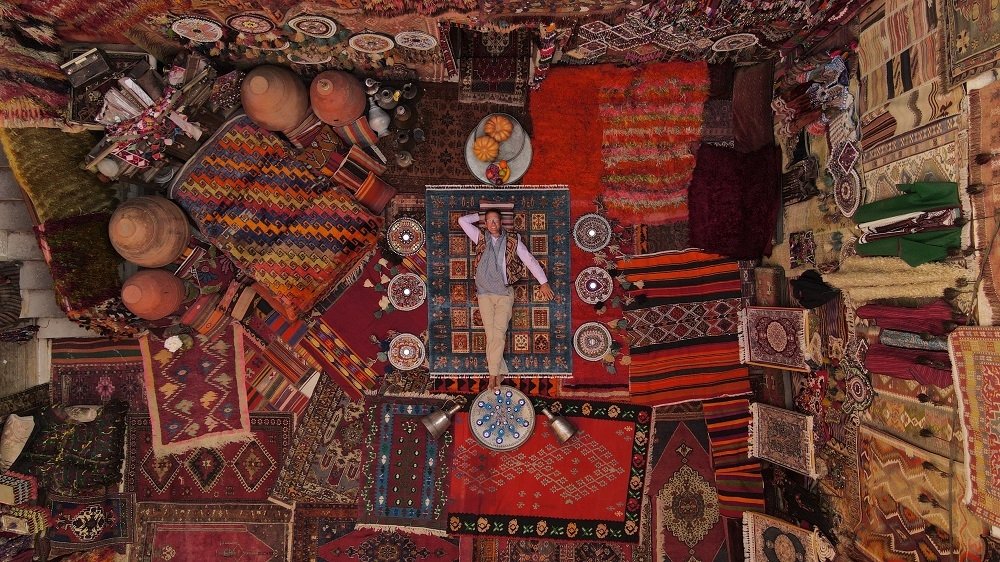 If your journey as an expat or adventurer has brought you to Turkey but you have found yourself missing all the travel and unique experiences from pre-COVID-19 times, satiate that wanderlust with vlogs from these intrepid souls

Last Saturday on Feb. 20, CNN Travel aired an episode devoted entirely to Cappadocia on the travel program, “Quest's World of Wonder.” This is the second episode in the fourth recurring season of the show, which is presented by CNN’s well-known anchor and correspondent Richard Quest, who also paid a visit to Istanbul in the travel show’s premiere season in 2019. The show has had to film much of the past two seasons amid the COVID-19 pandemic and even aired an episode devoted entirely to the technical difficulties of the situation. Nonetheless, production persevered, and in November of last year, Quest visited destinations in Turkey’s historical Cappadocia region known for its fairy-chimney rock formations, caves and underground dwellings and embarked on adventures such as frequenting the Avanos Hair Museum, riding a horse and hot air balloon and filming from the award-winning Museum Hotel.

“It is unique. There is a landscape that is one of a kind, with experiences that are unusual and enriching - and you will want to experience the distinctiveness of all of this for yourself,” said Quest, speaking on his experience filming the segment at Cappadocia.

It’s a rare treat in these strange times to be able to watch recently filmed travel shows. However, luckily, there are still a few adventurous souls, and fellow expats at that, who are safely discovering sites in Turkey and sharing their experiences with viewers.

British expat Mick Scarsbrook is no stranger to the screen, famed for his viral video, "Türkiye Bir Cennet" ("Turkey is a Paradise"), in which he laments in Turkish over the litter on Turkey’s shores, which garnered over 40 million views and handed him the moniker “Mick Amca” (Uncle Mick in Turkish), and now he has teamed up with his wife Trudie for an entertaining and informative travel series. Originally started to give people an insight into beautiful places to explore and visit in Turkey, the series also includes informative videos on moving to Turkey as well as captivating travel videos in destinations such as Hatay and a wide variety of locations in the surroundings of their hometown of Fethiye.

Catching up with Mick, I asked how it has been filming and overall being in Turkey during the pandemic, to which he said: “We feel very fortunate and lucky to be here in Fethiye, especially during COVID-19. The restrictions have stopped us from being able to show places looking at their best as a lot of hotels and restaurants have been closed, so that’s been quite difficult, but we have managed to produce some films focusing on Fethiye and showing property in the area.” I asked Mick to name some locations where they hope to head to next, and he said: “When restrictions lift, we have some exciting plans to film in Ankara, Iskenderun, Bursa, Van, Trabzon and tourist destinations such as Marmaris and Bodrum when they open up again.”

The YouTube channel, “Mick and Trudie,” hosts a wide variety of videos Mick has regularly produced on Turkey for years now and even includes lighthearted lessons in conversational Turkish as well as English language tips for his Turkish viewers.

Both hailing from the U.K., Chris and Marianne are a couple that has been traveling the world since 2018 and producing travel vlogs, in other words, video blogs, of their adventures. When the pandemic reached border-closing heights, the couple were in Turkey with their campervan, and they decided to just stay in place, which at the time happened to be the parking lot of a sports facility in Istanbul where they spent 95 days in isolation. Since then, they have been to a variety of destinations along Turkey’s Black Sea and Cappadocia and are now making their way east along the southern coast filming captivating videos of the destinations on their way.

The TREAD the Globe Vlog series, which can be viewed via their YouTube channel, has well over 300 videos, a majority of which have been shot in Turkey and have been viewed over 3 million times. I had the opportunity to connect with the duo, who are currently traversing around the Fethiye region and to share how much I have been enjoying their addiction-worthy video series. Like Mick Scarsbrook and Trudie, Chris and Marianne are also an endearing couple who are extremely enjoyable to watch.

Talking to Marianne about what it was like being derailed in Turkey when restrictions set in, she said: “Like everyone, we have changed our plans and adapted accordingly, and despite the original fear of the unknown that was felt by us all, we decided that we would not give up; we are after all 'at home,'” she said referring to “Trudy,” the campervan that they have been living in since January 2020, “and so, we decided that we would stay in Turkey and wait it out in the hope that we would be able to continue our adventure east.”

The “TREAD” title of their vlog website and their YouTube channel, TREAD the Globe, stands for “Travel Responsibly, Eat, Adventure and Dive” and the duo have been doing so for the past three years with the aim of attempting to visit every country in the world in either their campervan or with a backpack.

As for how this new life adventure first began: “After losing a friend in his mid-40s to a heart attack and Marianne's best friend having kidney failure, she amazingly donated a kidney to her friend (and saved her life),” Chris explains. “This caused us to rethink life, and we just decided life was too short so we sold everything we own, rented our house out and bought a campervan. This challenge we thought was hard enough in the best of times, having a world pandemic hit after we had left, made it so much harder.”

“We have never been considered quitters and having been shown so much friendship and support from Turkey our situation and experience has turned into one that can only be described as incredible,” Marianne remarked. “We will always feel that a part of our heart will remain here in Turkey and have made lifelong friendships. We don't know for sure where this adventure will take us, but we will share all the beauty, nature and kindness that we encounter. There is so much positivity and love in the world, and we feel grateful to be able to share this with our viewers.”

“Our plan for the next month is to continue east along the south coast and will be sharing all we find and experience during the travels. We have had a little time on this coastline before and know we are in for a treat,” they said, adding that their plans, which remain fluid and subject to the situation, are to visit Hatay and Gaziantep before heading north to Kars and eventually into Georgia.