How to help Izmir earthquake victims and protect our furry friends 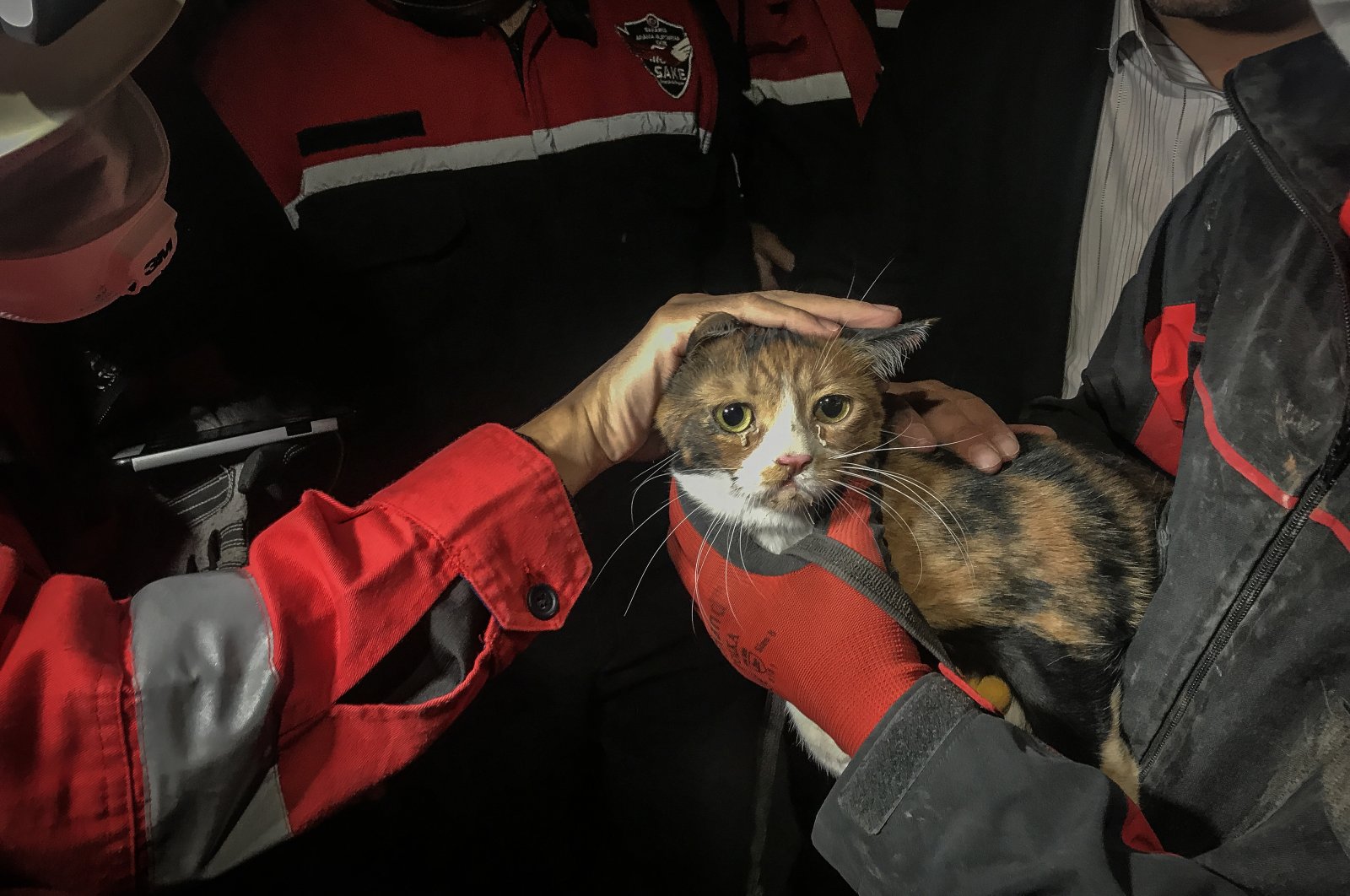 A cat was rescued from the rubble of Yılmaz Erbek Apartment after 30 hours of search and rescue efforts following an earthquake in Izmir, Turkey, Oct. 31, 2020. (AA Photo)
by Leyla Yvonne Ergil Nov 05, 2020 12:15 pm
Edited By Yasemin Nicola Sakay

Along with nationwide devastation, the recent earthquake in Turkey’s western Izmir province has brought on miracles, a strong sense of community, generosity and many lessons learned

Turks are known for their generosity, hospitality and enthusiasm for lending a “helping hand,” a term coined by the word “imece” in Turkish. The Izmir earthquake has once again shed light on this beautiful aspect of Turkish culture as a beacon of hope for humanity as people all over the country are mobilizing to offer assistance in the rescue efforts and rebuilding of homes and lives.

Every news outlet in the country and many all over the globe covered the remarkable rescue of two young girls, one 65 hours following the quake and another after spending 91 hours trapped under rubble. Offers made by Yemeksepeti.com founder Nevzat Aydın and Yurtiçi Kargo to cover their education costs were just a drop in the bucket of the outpouring of efforts by Turks all over the country to give what they could. When 4-year-old Ayda Gezgin, the young girl recovered four days after being trapped in a demolished building in Izmir’s Bayraklı, said that she wanted köfte (Turkish meatballs) and ayran in response to ambulance workers asking her what she would like to eat, citizens all over the country called the closest restaurants to the hospital hoping to be able to be the ones to order the young girl’s first meal after being rescued.

The generosity is truly widespread as people are offering their homes to those displaced and free meals to rescue teams, and the government, municipalities and organizations such as Turkey's Disaster and Emergency Management Presidency (AFAD) and the AKUT Search and Rescue Association have set up tent cities and are offering warm blankets and food to earthquake victims.

There are a variety of ways we can volunteer assistance to those displaced due to damage to their homes; however, it is important to make sure any donations go to the right place. In this regard, if you want to help, make sure you do so through official outlets, such as AFAD and AKUT, which have been instrumental organizations in search and rescue efforts and in setting up temporary housing for those displaced. AFAD is officially in charge of assisting earthquake victims. It is also possible to make direct donations on their website www.afad.gov.tr. Meanwhile, AKUT is also taking donations starting from TL 20 ($2.35) via their official website www.akut.org.tr or you can simply donate TL 10 by typing "AKUT" into an SMS sent to 2930. Both AFAD and AKUT accept and train volunteers, while AKUT also has an online store, where you can purchase emergency backpacks filled with necessities in the case of a natural disaster.

Other official channels where you can donate include the Turkish Red Crescent (Kızılay), which has been setting up mobile kitchens and preparing hot meals for the earthquake victims.

Donations can be made through their website kizilay.org.tr or through any post office (PTT) branches and most banks throughout Turkey. The Green Crescent Aid U.K. has created a relief fund on the website Just Giving where donations will be distributed to Turkey’s Kızılay. Based in the U.K., the Turkey Mozaik Foundation is a civil society organization that has also been collecting donations via Just Giving.com. Meanwhile, many regional municipalities have been collecting donations of blankets, clothing, cleaning supplies and personal care items, which they have been transported to the tent cities set up in disaster areas.

Working with the Izmir Metropolitan Municipality, ihtiyacharitasi.org is a virtual map of locations in Turkey where people can request help or assist those in need. A special “needs map” has been set up to connect those who require housing as a result of the earthquake and those in financial need with others who have homes that are available or are seeking opportunities to help the disadvantaged.

An important way to prepare for a potential disaster is to establish where the emergency evacuation point is for your particular neighborhood. Luckily, AFAD has established an easy-to-use search engine called “Acil Toplanma Alanı Sorgulama,” which is accessible via the website www.turkiye.gov.tr. Simply enter your neighborhood and address and the system displays a number of designated areas to gather in the case of an emergency.

Yet another unfortunate narrative of the recent earthquake in Izmir is the vast number of pets that have gone missing and their owners trying to track them down. There are a number of websites and social media accounts that are trying to rectify this problem and reconnect pets with owners, including Patibuldular, @izmirdepremkayiphayvanlar and Hayvanlar İçin Projeler Derneği.

Many an expat in Istanbul is familiar with Senem Selimi, aka the “Party Guru” and the founder of Istanbul Expats and Internationals Event Organization. While Selimi is best known for throwing thematic social events, what many don’t know is that she is an avid animal lover and that the parties she holds are in fact to benefit the animals living on the streets in Istanbul. Well aware that one of the greatest of fears of pet owners is to lose track of a beloved pet, Selimi recently fulfilled a long-standing pursuit of hers, by bringing a unique pet tracking system by the name of PatiTracker to Turkey.

PatiTracker is an E-Id tag that utilizes QR codes, a web-based GPS system and NFC technology to access information provided by pet owners. By simply scanning the ID tag by taking a photograph with your cellphone or utilizing NFC phone technology, or entering the code on the tag into the www.patitracker.com website, anyone who finds a pet wearing this tag, can easily access the owner’s details to safely return their lost pet. Differing from other chip-based systems, PatiTracker does not necessitate pricey membership or batteries and the tag is small, light-weight and waterproof. The pet owner can enter whatever personal information they choose and should their pets get lost, anyone who enters or scans the code will be able to contact them directly and the system will also immediately send them an SMS message. In addition, pet owners can create a profile for their pets, including their photo as well as enter important information such as the pet’s medical history or special dietary restrictions and should your pet get lost, there is also an option to create a “lost” poster to post on the website. Membership is free to www.patitracker.com and the website also provides important behavioral, health and veterinarian information on pets.