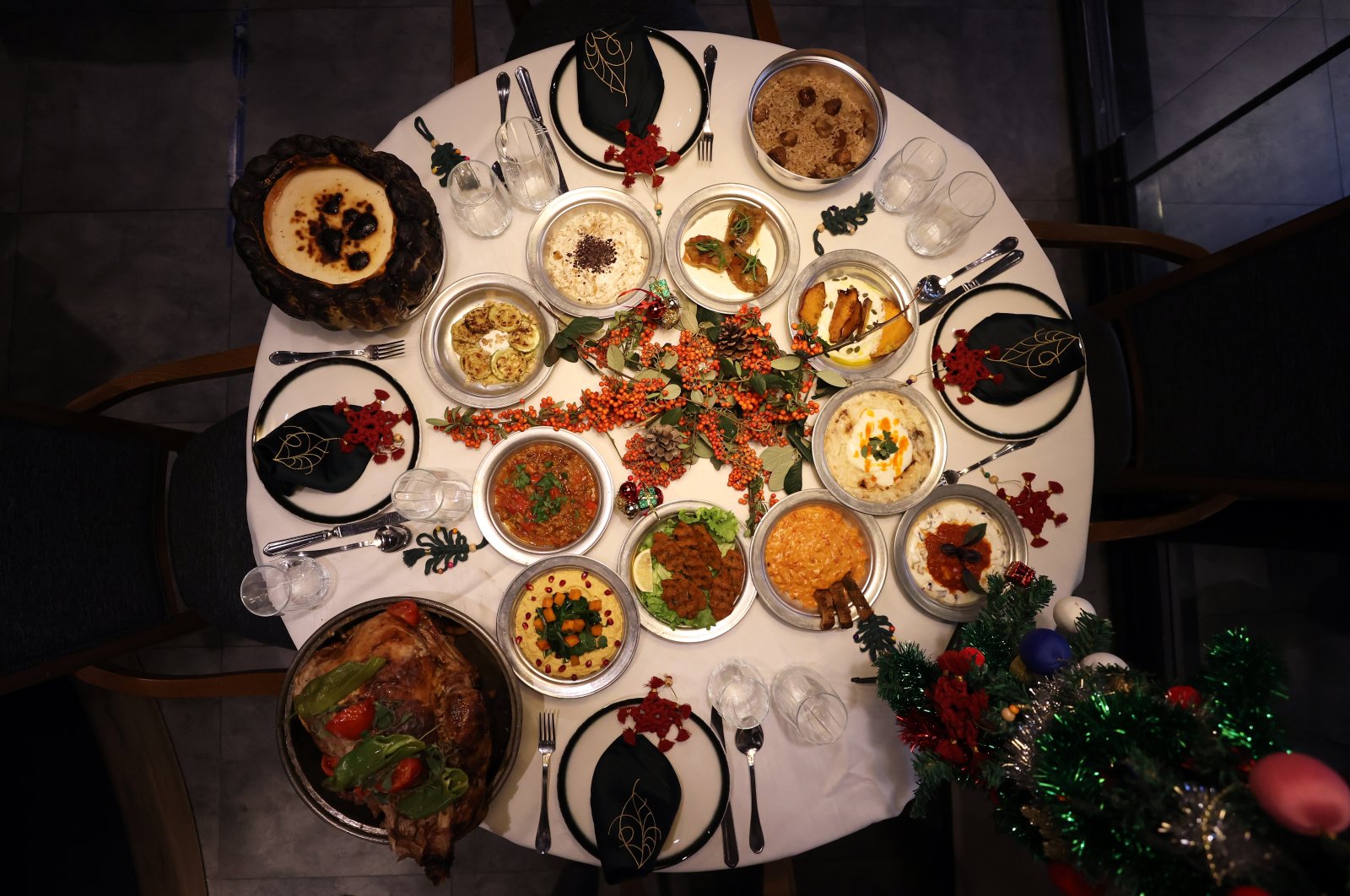 Stuffed and roasted turkey and mezes are the indispensables of a Turkish New Year's table. (AA Photo)
by Leyla Yvonne Ergil Dec 24, 2020 10:43 am

Turks love to celebrate New Year's Eve and this well-loved holiday celebration includes a family dinner as a tradition. Let’s take a look at what delicious treats from Turkish cuisine grace the table on these reunion nights

While it was not always the case, over the past few decades in Turkey, New Year’s Eve has become a significant holiday, with decorations set up in homes, shopping centers and town squares weeks before attesting to its popularity. Suddenly everywhere is decked out in red, shiny ornaments and fairy lights. It is not at all connected with Christmas but instead to New Year’s Eve – the end of one year and the start of another.

What to expect from a Turkish New Year’s feast

Turks love to start a meal with soup, hot or cold. Granted we are in the heart of winter when ringing in the new year, so a warm soup made of, most likely, seasonal winter vegetables will be what starts off the feast. While certainly not traditional, pumpkin soup has gained significant popularity in recent years in Turkey, which is surprising as pumpkin was previously almost exclusively consumed as a dessert. Nevertheless, it is becoming a staple soup for cold winter nights and so don’t be surprised if your New Year’s Eve meal begins with this delightful soup that is sometimes seasoned with ginger, nutmeg or even turmeric.

While some Turkish tables may forgo the soup course for New Year’s Eve, it is guaranteed that there will be a round of cold starters including meze varieties to begin the meal. Most meals will try to include a yogurt-based meze, such as haydari, köpoğlu (kyopolou) or tomato-based variations which could be acılı ezme or şakşuka. A Turkish feast will most likely also include an eggplant starter of sorts as well as other winter vegetables such as celeriac, Brussel sprouts or even Jerusalem artichokes. Many of these starter dishes can be purchased premade from charcuteries. As a salad, you can expect variations on the Gavurdağı salad, whose main ingredient is actually pomegranate seeds. As pomegranates are symbolic of abundance and prosperity and there is a tradition of smashing one in front of the home’s door to usher in good fortune in the year to come, it is probable that any salad served on this evening will include these delicious and nutritious garnet gems.

Dolma, which quite literally means “stuffed,” is one of the most integral elements of Turkish cuisine. The Turks love to feast on a wide variety of delicately stuffed vegetables, and the more time-consuming the process, the more special the dish is. While most of us are familiar with stuffed grape leaves, which for many families is a dish passed down through the generations, did you know that there are actually two different variations? That is because when it comes to stuffed grape leaves, there is the vegetarian version that is simply stuffed with rice seasoned with currants and sweet spices, but there is also a minced meat stuffed version with tomato and pepper-spiced rice. A similar meat-based stuffing is also used in “lahana dolması” in which cabbage leaves are wrapped around the filling. Then there is the bell pepper, tomato and even dried eggplant dolmas, in which tomato-based bulgur is stuffed into the various vegetables and is vegetarian. In the months leading into fall, as part of the pantry-preparing process for the winter, Turkish households will also preserve the skins of eggplants and peppers, stringing them together and hanging them up to dry. You may have seen these decorative strings of vegetable skins in farmer’s markets as they are just as decorative as they are practical, but their purpose is to be painstakingly filled and prepared as “dolmas” for winter meals. These dishes are traditionally served warm and accompanied by cold, plain yogurt.

The star of the feast is also referred to as a “dolma,” but in this case, it is the coveted stuffed and roasted turkey, or as they refer to the bird in Turkish, “hindi.” While interestingly enough, roasted turkey is the main feature of the New Year’s feast, similar to the Western tradition for Christmas, the style in which the bird is stuffed and served differs greatly. Don’t expect cranberry sauce, gravy or even potatoes, as in Turkey, this bird is stuffed with a delicate combination of spiced rice and chestnuts and roasted. The stuffing of rice and chestnuts consists of a variety of seasonings that brings about that classically Turkish taste that includes currants, cinnamon and cloves but occasionally can also have allspice, pine nuts, apricots and pistachios included in the mix. The same rice mixture can also be used to stuff a roasted chicken as well.

For dessert, the tradition in Turkey in winter is to have “kabak tatlısı” – in other words, pumpkin dessert. However, unlike the pumpkin pie Americans are known for, this is an entirely different type of pumpkin treat. In Turkey’s variation, large slices of pumpkin are doused in sugar and slow-roasted until almost caramelized in a sherbet derived from the moisture released. They are then sprinkled with ground walnuts and served alongside a dollop of “kaymak,” Turkey’s version of clotted cream, the most sought after variation of which is produced from water buffalo milk.