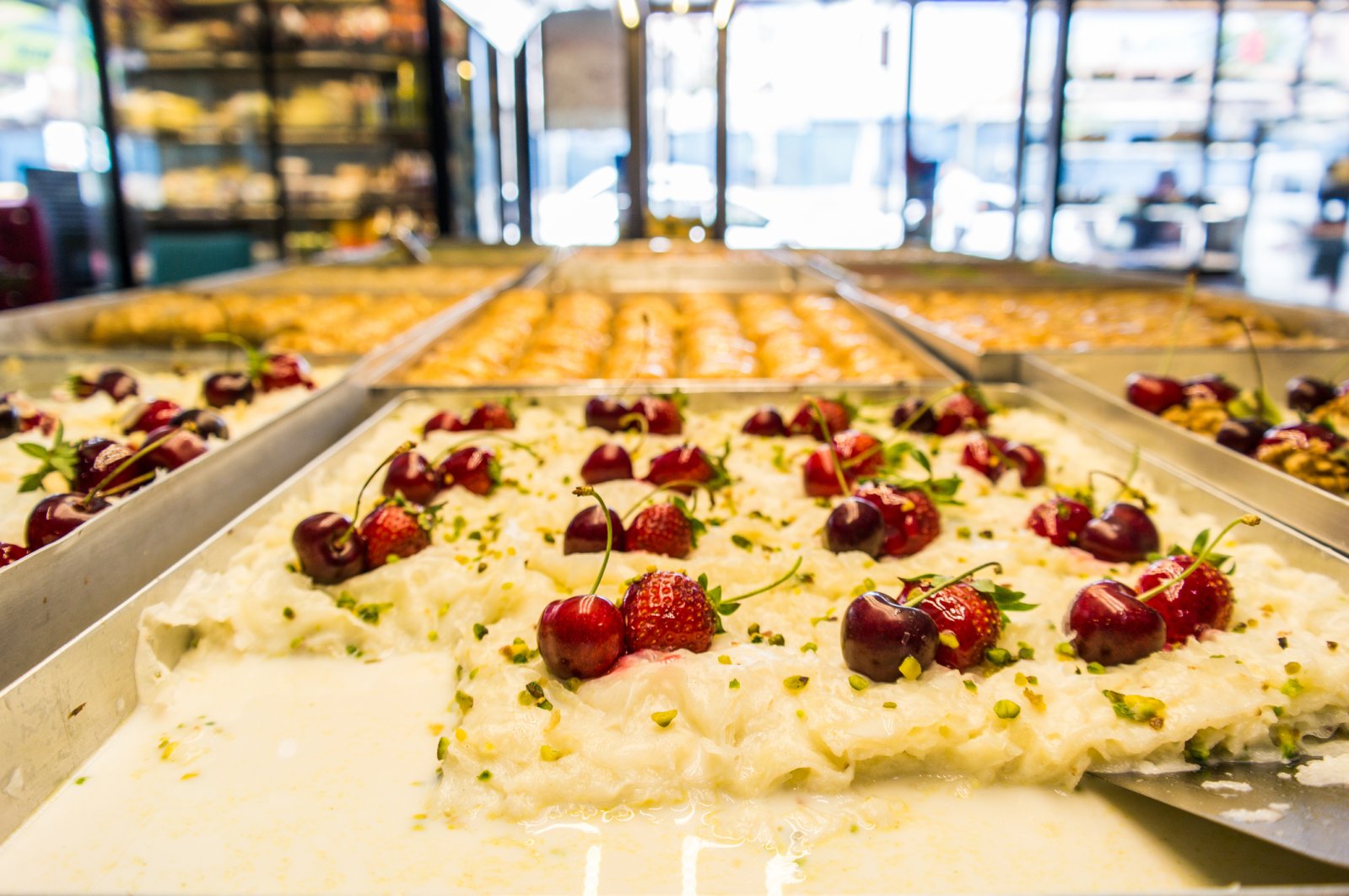 Güllaç (front) and baklava (back) have always been popular desserts in Turkish culture. (iStock Photo)
by Leyla Yvonne Ergil May 18, 2020 12:30 pm

From soft syrupy dates and rosewater-infused güllaç to steamy hot and freshly baked pide, here are some of the beloved delicacies enjoyed by Muslims across Turkey during Ramadan

Turkey and other Muslim countries are currently in the throes of the month of Ramadan, in which worshippers fast from dawn to dusk to commemorate the month in the Islamic calendar in which the holy book the Quran was first revealed to Prophet Muhammad. This special time is spent fasting in the day and enjoying fast-breaking feasts (iftar) at night and in the early hours of the morning with family, while also paying heed to being charitable, self-sacrificing and of sound body and mind. Considered one of the five pillars of Islam, the month of Ramadan is the largest collective fast to take place across the world and is a sacred time for Muslims, who also consider it to be a cleansing of the body and soul and an opportunity to rid oneself of unhealthy practices.

Considering the world is currently combating the coronavirus, a modern-day pandemic which has left us housebound and isolated, there couldn’t be a better time to fast, should your health permit. Fasting is widely known to have many health benefits, ranging from detoxification to improving cardiovascular health, cognitive function and weight loss, all of which are qualities that will help our bodies to remain diligent in trying to prevent catching the illness that is currently prevailing. However, even if the timing is not right for you to attempt a fast, you can still enjoy some of the specialties that surface during this holy month each year, to live it up while in self-isolation and to gain optimal health.

As the focus of the iftar and fast-starting sahur meals, which take place at dusk and dawn respectively, is to consume the proper nutrients to get your body through the day, this is the opportune time to try some of the fortifying foods that make their way onto the Turkish table during Ramadan.

One of the most important items consumed during the holy month of Ramadan is the beloved date, which is referred to as hurma in Turkish. It was the Prophet Muhammad himself who advised breaking the fast with a date and thus the tradition has prevailed throughout history. Luckily, these little dried jewels are loaded with nutrients including Vitamin B, iron, magnesium, potassium, manganese and even protein.

The beloved Ramadan pidesi, a painstakingly prepared circular flatbread, adorned with a baklava-design pattern as its crust, is an absolute must for iftar dinners as is evident by the long lines that build up in front of bakeries just before the iftar bell tolls. While admittedly this year, the lines are shorter, the demand for this beloved holiday bread still remains the same, and the local bakers and municipalities are doing their utmost to ensure every household gets their bread especially during the lockdown as they drive through neighborhoods and even hand-deliver them. So, what is it that makes this bread so very special? The dough for this flatbread is enriched with sugar, oil, milk and even eggs and is put through multiple rises before being baked in a wood-fired oven. It takes a special master to know the techniques of repeatedly turning the pide over as it cooks and then brushing it with "şifa,” which means “health” in Turkish and is a special water mixture that gives the bread it's signature golden glow.

Even those who are not that familiar with Ramadan traditions have probably seen those elusive boxes of holiday supplies offered in all shapes and sizes by shops all over the country. These boxes are prepared to help people have a wide range of products to prepare food to get people through the iftar and sahur meals. An important component of these boxes is olives, which are consumed whole and independently, pulses and grains such as rice and lentils and traditional dessert preparation items such as irmik (semolina) or pudding mixtures. Additional complimentary items can be orzo (short-cut pasta) to add to rice, tomato paste to season the beans, fruit jams and a box of dried tea and sugar with which to sweeten it. The key is for these feast boxes to have variety and to be offered at a discounted price, so it is a great opportunity to purchase these packs to at the very least, properly stock your pantry.

Beans, beans, they're good for your heart...

Traditional bean dishes such as lentils, green beans or Turkish kuru fasulye, which are cooked in a tomato sauce or piyaz, which is a fresh white bean salad with parsley, onions and vinegar always have a place on the iftar table, serving as an excellent source of fiber and protein.

As soups are a wonderful source of liquid and nutrients, they are widely consumed during the month of Ramadan at both sahur and iftar. Ranging from lentil to tomato or even the offal variety, when Ramadan falls on the warmer months, as is the case this year, then there are a number of popular refreshing "yayla" soup variations that are yogurt and mint-based and served cold.

Komposto, or fruit compotes in English, which used to be widely popular in Turkey, seem to resurface during the month of Ramadan as they are a nutritious and delicious way to get vitamins, sugar and liquids into your body. The variations prepared depend on the time of the year, but some of the favorites are made from apricots and cherries, both of which are being harvested currently.

Any excuse for dessert

While güllaç is considered the official dessert for the Ramadan season, the monthlong iftar feast is a great excuse to serve a variety of desserts each evening. Güllaç is a dessert prepared of thin phyllo-like sheets of dried cornstarch, flour and water, which are referred to as güllaç, that are then soaked in milk and rose water, layered with walnuts and decorated with pomegranate seeds. Considered the precursor of baklava, the sheets used for güllaç were traditionally hand-rolled in the months preceding Ramadan and then stored for use during the holy month of fasting. Other desserts that gain popularity during Ramadan are “irmik helvası,” which is prepared from semolina cooked in butter and then doused with a sweet syrup and “sütlaç,” which is a Turkish version of baked rice pudding and similar to baklava could easily be considered the nation’s most favorite dessert.