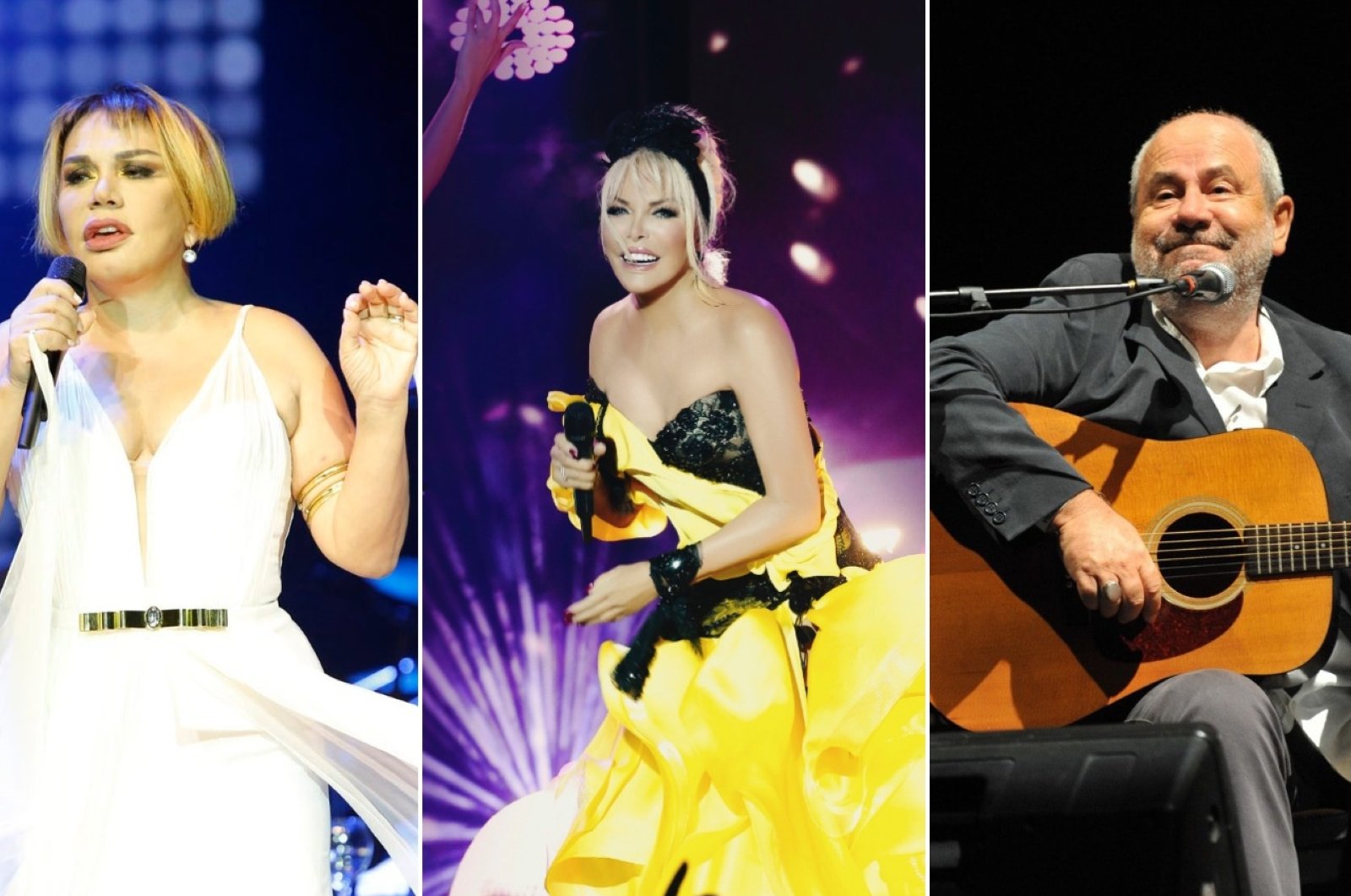 Whether you are a seasoned expat longing for some nostalgia or just curious about the Turkish music scene that shaped an era, here is a blast from the past of some of the most iconic songs and singers

Have you ever wondered what some of the beautiful nostalgic songs are that musicians countrywide play for attentive audiences in Turkey that can bellow in return each song by heart? Well, Turkey has a repertoire of classic songs by beloved musicians that continue to be passed on and sung with gusto by every generation. These songs, first hailing from the 1970s to the '80s, tell the story of a Turkey that was plagued by political unrest and coups and fast-developing cities due to rural migration. The sometimes melancholic and at-times joyous music reflected the sentiments of the era, which Turks now and always look back upon with bittersweet nostalgia.

This week Turkey mourned the loss of beloved singer, pianist and composer Timur Selçuk, who passed away in his sleep last Friday at the age of 74. The son of Turkish classical music composer Münir Nurettin Selçuk, Timur Selçuk has always been held in the highest regard in Turkey. He was the founder of the Istanbul Chamber Orchestra and competed in the Eurovision Song Contest twice, including with the country‘s first-ever entry sung in Turkish. Selçuk held the title of State Artist, an elite award bestowed upon the Turkish republic’s most significant artists, musical or otherwise.

What Selçuk was most famed for, however, was his musical compositions, which incorporated lyrics adapted from poetry by famous Turkish poets and would mark the beginning of Turkish pop music. One song that was remade by multiple musicians was the 1974 hit “Ispanyol Meyhanesi.” Its lyrics derived from a poem penned by Ümit Yaşar Oğuzcan that tells the story of a female vocalist evoking an emotional performance for an audience in a “Spanish Tavern.”

Nilüfer is a Turkish pop vocalist with over two dozen albums to her name, the first being eponymous in 1974. While one of her most well-known renditions just happens to be of Selçuk’s “Ispanyol Meyhanesi” as well as other emotional tear-jokers such as “Her Yerde Kar Var” ("There is Snow Everywhere") and “Geceler” ("Nights"), it is the positive and life-affirming song “Yaşamak Ne Güzel Şey” ("What a Great Thing it is to Live") that brings great joy when revived these days.

“Hayat Bayram Olsa” ("If Life was a Holiday"), a 1973 hit released by Şenay Yüzbaşıoğlu, aka Şenay, is an upbeat song that was originally the Croatian song “Obecanje” but was rewritten by Şenay with bittersweet lyrics.

The legendary popstar vocalist Ajda Pekkan, who at the age of 74 continues to grace the stages with her breathtaking beauty and performances, reached superstar status in 1968 with her characteristically upbeat songs including the hit “Boş Vermişim Dünyaya” ("I Gave Up on the World"). Having released 20 albums, including one in French, Ajda holds the title of “State Artist” in both Turkey and France. She embraced the practice of covering popular international songs reformatted with Turkish lyrics, creating some of her most well-known hits such as “Kimler Geldi, Kimler Geçti” ("Who Has Come and Who Has Gone"), which is a reworking of Tony Hatch’s “If We Were Free;” “Hoş Gör Sen,” a Turkish version of Enrico Macias’ “On s'embrasse et on oublie” and “Palavra,” Ajda’s remake of Dalida and Alain Delon’s song "Paroles." Hands down, her most popular cover, however, is the 1979 hit “Bambaşka Biri” ("Someone Else"), which is the Turkish version of “I Will Survive” by Gloria Gaynor.

The only vocalist to compete with Ajda Pekkan for capturing the hearts of the Turkish nation is Sezen Aksu, aka Minik Serçe, which translates to “Little Sparrow.” With 40 million albums sold worldwide, this singer, songwriter and producer could easily be considered Turkey’s most popular musician ever. Her first album “Allahaısmarladık” was released in 1977, and since then she has made over two dozen studio albums and over 10 remixes. Aksu’s highest grossing album was the 1991 release “Gülümse” ("Smile"), which has multiple popular singles including “Her Şeyi Yak” ("Burn Everything"), a song that was later covered by the rock band Duman. The 1984 melancholic ballad “Sen Ağlama” ("Don’t You Cry") played the heartstrings of every Turk, while the hit "Şinanay" got everyone up on their feet. Aksu’s song “Şıkıdım” pretty much made Turkish popstar Tarkan a household name and got the world dancing. But this is nothing new as Aksu famously paved the way for many a rising star in Turkey as she would showcase special vocal talents in her concerts such as the likes of Sertab Erener and Levent Yüksel, who would go on to peak in popularity in Turkey in their own right. In fact, Erener would later become Turkey’s first-ever winner of the Eurovision Song Contest in 2003.

MFÖ, an abbreviation for Mazhar Alanson, Fuat Güner and Özkan Uğur – the names of the three musicians who make up this popular band, continues to perform and has remained timeless with multiple songs that are included in nostalgic repertoires. Their breakout album was the 1984 release “Ele Güne Karşı” ("Against the Day") which included such hits as “Sen ve Ben” ("You and I"), “Yalnızlık Ömür Boyu” ("Loneliness is Forever"), “Bu Sabah Yağmur Var Istanbul’da” ("It’s Raining this Morning in Istanbul") and of course, "Bodrum Bodrum."

Fikret Kızılok is considered to be one of the pioneers of the Anatolian rock movement and was a prolific songwriter, vocalist and instrumentalist. In 1969, he revived “Uzun İnce Bir Yoldayım” ("I am on a Long and Narrow Road"), the beloved türkü (Turkish folk song) by Aşık Veysel, but it is his 1990 love song “Bu Kalp Seni Unuttur mu” that he is most remembered for. A television series show was even named after the song.

Kayahan, another prolific vocalist, guitarist, composer and songwriter, was legendary for exclusively playing his own compositions. Starting in 1975, he released eight best-selling albums, was awarded the Golden Orange for his song “Geceler” at the 1986 International Mediterranean Music Contest and represented Turkey at the Eurovision Song Contest in 1990 with his song "Gözlerinin Hapsindeyim" ("I am Imprisoned by your Eyes"). His heart-wrenching ballad “Odalarda Işıksızım” ("I am Lightless in the Rooms") has been touchingly covered by Sezen Aksu and more recently Ceylan Ertem, but his song “Beni Anlamadın Ya” ("You Just Didn’t Get Me") remains to be one of his most beloved anthems.

The timeless classic "Benimle Oynar Mısın?" ("Will You Play with Me?"), which was released in 1974, remains one of the most popular romantic and sentimental songs from the era and was penned by songwriter, guitarist and vocalist Bülent Ortaçgil, who continues to perform to this day.

Unfortunately, Tanju Okan, the singer of the popular song “Öyle Sarhoş Olsam Ki” ("If I Could Just be that Drunk") passed away due to cirrhosis of the liver; however, his greatest and beloved hit continues to live on. Like "Her Şeyi Yak," this song has been covered by many rock singers groups, most notably by the late Barış Akarsu and rock band Kargo.