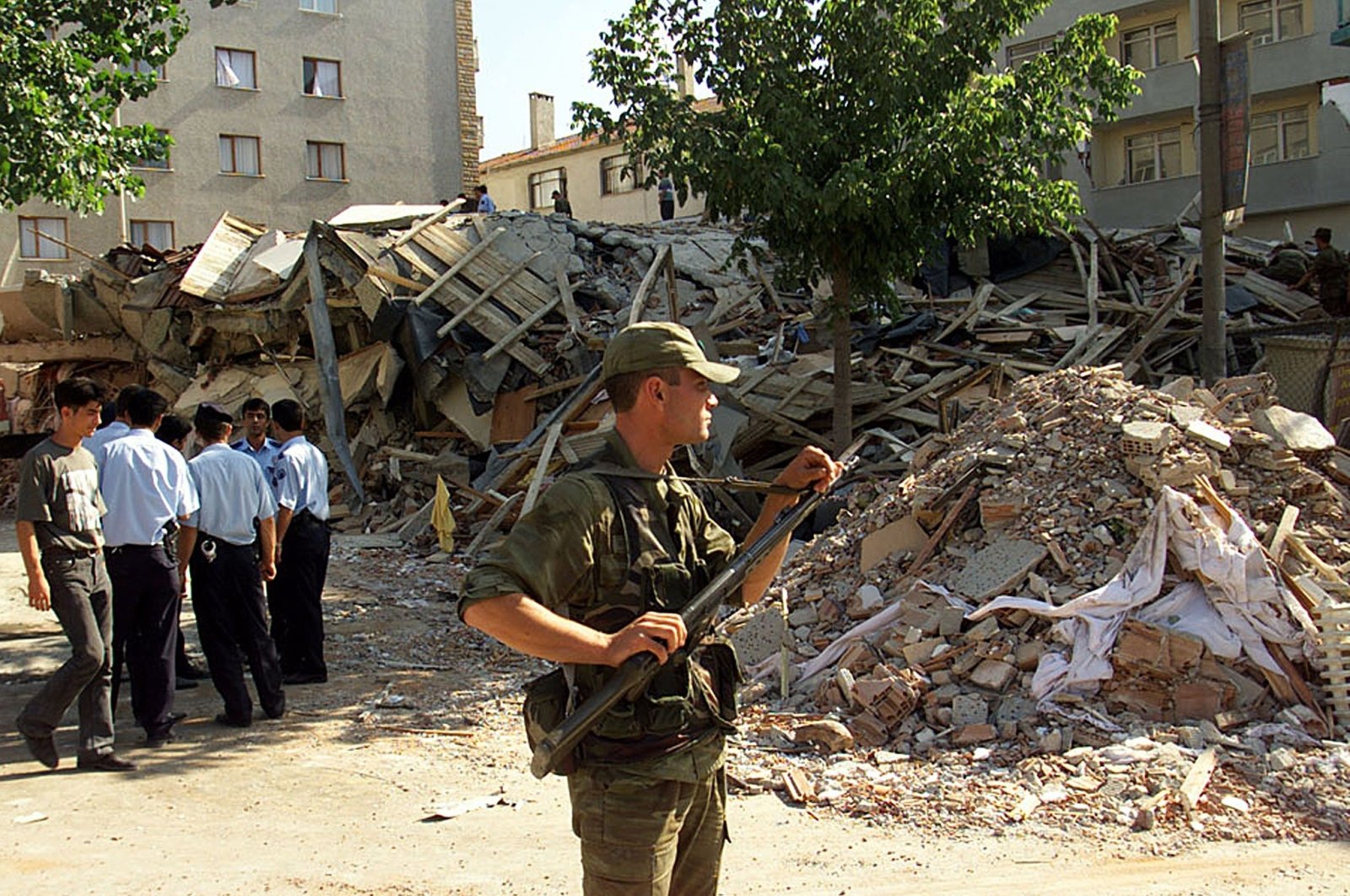 Turkish gendarme stands guard in front of rubble after an earthquake in the Avcılar district in Istanbul, Turkey, Aug. 18, 1999. (REUTERS Photo)
by Daily Sabah with DHA Sep 16, 2020 12:59 pm
RECOMMENDED

A projected earthquake for Turkey’s northwestern Marmara region “will push the region about 2.5 meters (8.2 feet) toward Greece,” according to an earthquake expert.

Övgün Ahmet Ercan, a professor of geophysics, has warned about a fault line across the Sea of Marmara, which is located off the shores of Turkey’s most populated city, Istanbul. The fault line extends through Tekirdağ, a province west of Istanbul, with the projected epicenter of the possible large-scale earthquake striking 15 kilometers (9.3 miles) off the Tekirdağ coast, according to Ercan.

“Its magnitude would be as big as 7.2 (on the Richter scale) and would shift the region toward Greece,” Ercan explained.

Turkey is among the world's most seismically active zones as it is situated on several active fault lines, with the most potentially devastating being the Northern Anatolia Fault (NAF), the meeting point of the Anatolian and Eurasian tectonic plates.

Ercan says that a 7.2-magnitude earthquake would produce a crack in the fault line from the Büyükçekmece district on Istanbul’s European side to as far as the Gulf of Saros in the west and “all the way to Thessaloniki in Greece."

For Ercan, this, along with another potential epicenter in Istanbul, constitutes the long-anticipated “big one” to hit the city. Experts have warned for years that the city could be rocked once more by an earthquake with a magnitude higher than 7.0.

“A big one is actually a composite of two – in Istanbul and Tekirdağ. For Istanbul, it would be somewhere about 25 kilometers south of the Küçükçekmece district and could trigger a shift toward the Aegean Sea. This would be between the magnitudes of 6.3 and 6.7,” he said, adding that both earthquakes would be devastating, although that tremors in Tekirdağ would be greater in magnitude.

However, he warned that the Istanbul earthquake would be more dangerous, as the city had a higher population density, unlike Tekirdağ where the population is scattered across a wider area.

A report commissioned by Istanbul Metropolitan Municipality (IBB) and published a few months ago, said a 7.5-magnitude earthquake would inflict material damage and casualties in each of the city's 39 districts that straddle the Asian and European continents.

Though the Asian side is slightly safer due to its distance from the fault lines, it would still suffer the collapse of hundreds of buildings, according to the report.

Based on earthquake simulations, the report highlights the need for reinforcement and reconstruction of old buildings that may not endure a powerful tremor or its aftershocks.

The Avcılar, Fatih, Zeytinburnu, Esenler, Küçükçekmece, Tuzla and Beylikdüzü districts stand out as those carrying the highest risk of immense devastation and casualties.