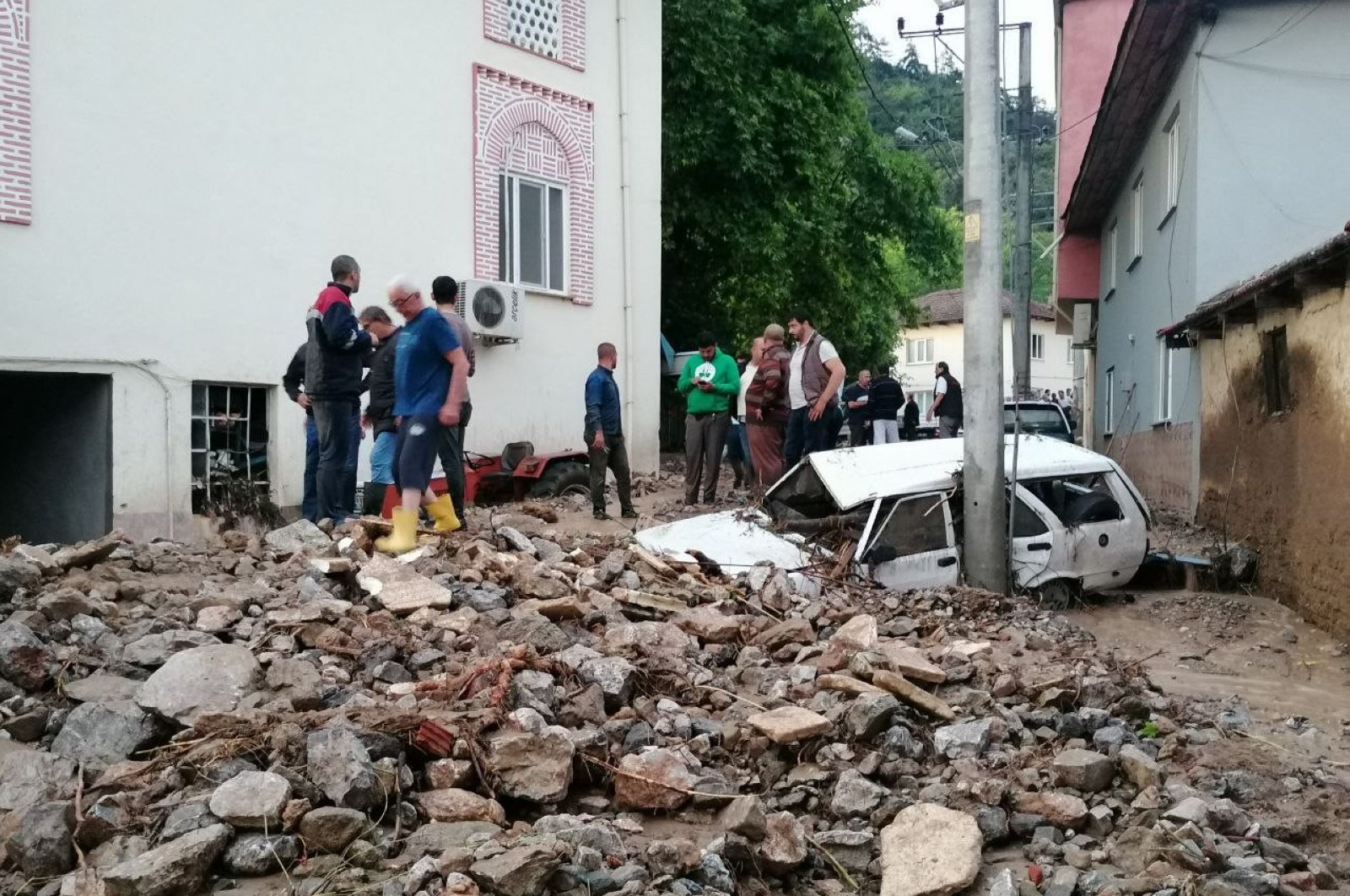 Floods triggered by heavy downpours in a rural part of the northwestern Turkish province of Bursa late Sunday killed five people, while a search is underway for one person who is missing.

Torrential rains bore down on several villages around Kestel, a district some 30 kilometers (18.6 miles) away from central Bursa, an industrial hub south of Istanbul. One was killed in Dudaklı and four others were killed in Kayacık village, which were inundated by floodwaters. The bodies were discovered by rescue crews early Monday. Villages were covered with thick mud left behind by the floods, while cars carried away by strong currents were piled on top of each other. Floods also uprooted huge trees, damaged houses and wrecked hundreds of acres of vegetable fields and orchards.

Interior Minister Süleyman Soylu and Minister of Agriculture and Forestry Bekir Pakdemirli visited the affected villages on Monday and pledged state aid to the locals. Soylu said the downpour in the area was “well above seasonal norms.”

One of the victims was Kader Akbaba, a young disabled woman who was trapped in her home in Dudaklı village. The four other victims and the one missing person were members of the same family in Kayacık village. Ahmet Bilen, his wife Türkan Bilen, their 10-year-old daughter Medine Bilen and Ahmet Bilen’s 71-year-old mother were among the bodies recovered from a riverbed near their farmhouse in the village. Ahmet Bilen’s 17-year-old niece Derya Bilen remains missing. The family, who resides in central Bursa, was temporarily staying at the farmhouse, authorities said.

Crews from the Disaster and Emergency Management Authority (AFAD) and local search and rescue crews accompanied by gendarmerie are searching the region to find the missing girl. Deputy Interior Minister Ismail Çataklı, who coordinated the response efforts in the region, told reporters Monday that teams were searching a riverbed and crews of 28 people each were combing the area, while a plane was flying over possible spots where Derya Bilen might have been swept away to by floodwaters.

Crews were also clearing flood debris from the villages of Dudaklı, Narlıdere, Aksu and Kayacık. Çataklı said Dudaklı was particularly affected by the floods, and debris had clogged the entrance to houses.

Çataklı said crews were also working to assess the damage while social services workers were visiting locals who suffered trauma. Turkish Red Crescent and municipality crews are distributing meals and hygiene kits to the local population in affected areas. The government also allocated TL 500,000 ($72,900) for emergency aid for locals affected by the floods.

Ayhan Aslan, a resident of Dudaklı, which has a population of 550 people, said it happened all of a sudden and they saw rocks torn from the mountain by the floodwaters fall on the village. “Neither I nor my 80-year-old father saw such a disaster here in our lifetime. It took about two hours for the rain to destroy our village. I don’t even know how damaged my orchard is,” he told Anadolu Agency (AA).

Bursa and other cities in northwestern Turkey have seen heavy downpours over the past week, though the damage from flooding was less severe in most areas. The General Directorate of Meteorology issued a “yellow alert” for the province on Monday, indicating heavy rainfall, strong winds and occasional hailstorms were in the forecast.