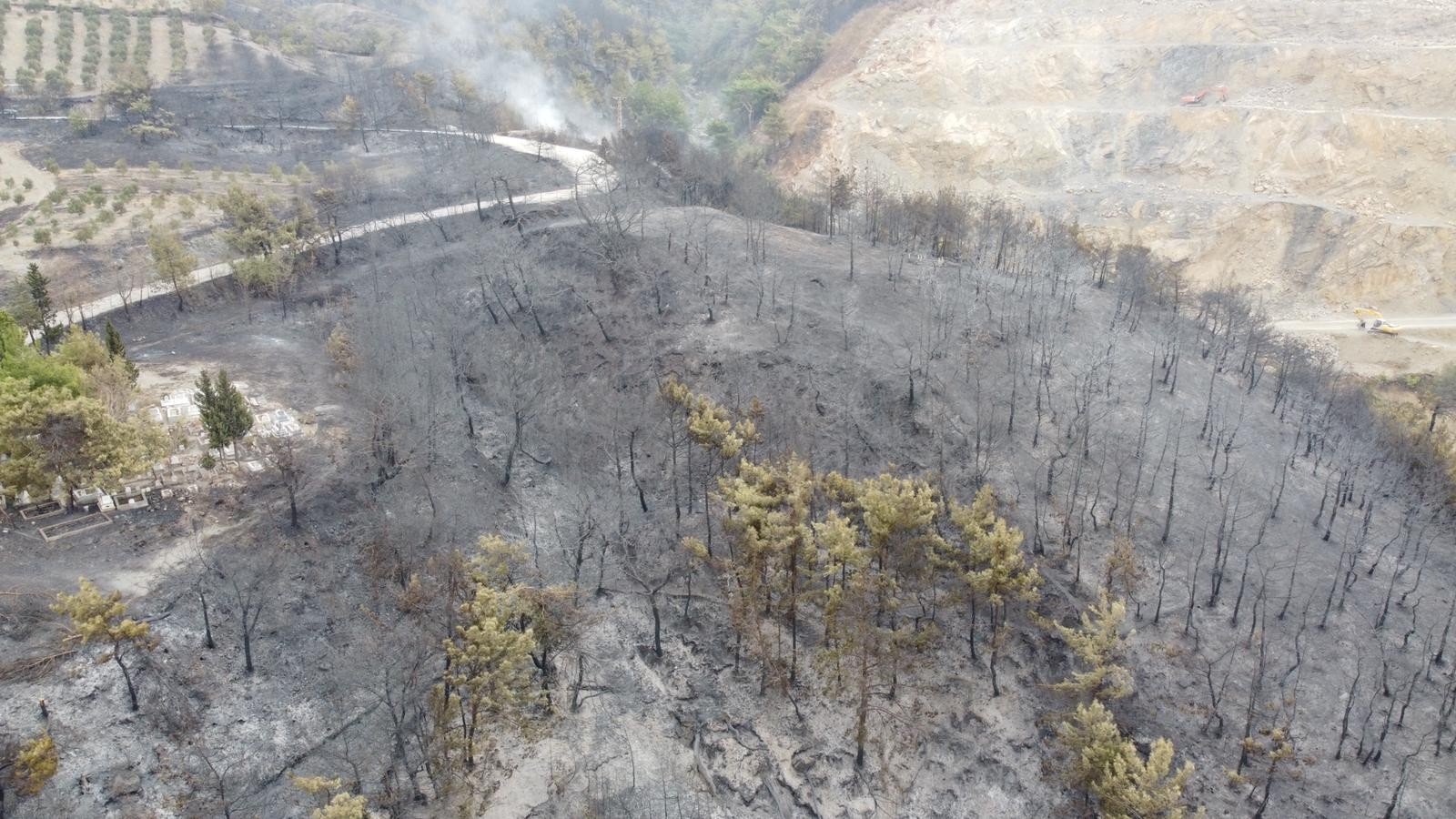 A few weeks after a forest fire wreaked havoc in several of its districts, the southern province of Hatay close to Turkey’s border with Syria, was hit by another fire on Tuesday. Firefighters only managed to get the situation under control on Wednesday through cooling efforts.

The fire broke out in Iskenderun, a port district, and was the latest in a series of 14 forest fires that broke out across the country on Tuesday.

A faction linked to the terrorist group PKK has claimed responsibility for the earlier forest fires in Hatay, but no terrorist link has been uncovered yet in Tuesday’s fire. Agriculture and Forestry Minister Bekir Pakdemirli, who monitored extinguishing efforts on the field, said four people were detained in connection with the incidents, including two for a smaller fire in the Yayladağı district of the province. Two suspects were caught with a gas canister next to a car near the scene and told security forces they were trying to fix their broken vehicle. The other two suspects were detained in Yayladağı, and investigations are still underway.

Pakdemirli said firefighters exerted intense efforts to put out the fire. “We were mobilized with 166 fire engines, 15 bulldozers, 700 workers and drones. The fire was on rough terrain with limited access, and it was a really big fire,” he told reporters Wednesday.

He said there were no casualties, but neighborhoods near the forest in Iskenderun reported damage, including 10 houses and a mosque. The minister said they were still examining the extent of the damage in burned areas.

Meanwhile, a report by Anadolu Agency (AA) released on Wednesday said the size of the areas affected by the forest fires had already exceeded the 2019 figures by October. AA reported that in 2019, 11,332 hectares of land were damaged in 2,668 forest fires last year, and this number had reached 16,441 hectares by October with 2,957 fires. Heightened global warming accompanied by drought and negligence are among the factors contributing to the rise in forest fires, which now last longer. The government has stepped up its fire response measures by increasing its forest firefighting forces' manpower, obtaining more equipment and trucks as well as employing drones for faster responses.

As Turkey fights fires it also seeks to expand its forests. Forests make up 29.2% of the country’s land, and it aims to expand it to 29.5% by the end of this year. Some 18,000 hectares of new forests were created last year. On Nov. 11, the country will run its second mass planting campaign where millions of saplings will be planted across Turkey to tackle desertification and rebuild what was lost in the forest fires that surged in the summer. In last year’s nationwide event, more than 13 million saplings were planted. Each household will be supplied with one sapling for free for this year’s campaign.

Turkey is also among the countries most affected by climate change and an increase in nonarable lands as it sits in a geographically challenging location sandwiched between different climates. More than half of Turkey's soil has the characteristics of arid, semi-arid and semi-humid climates. The country’s central and southeastern regions, known for their vast flatlands and steep mountains, are particularly vulnerable to the spread of desertification.