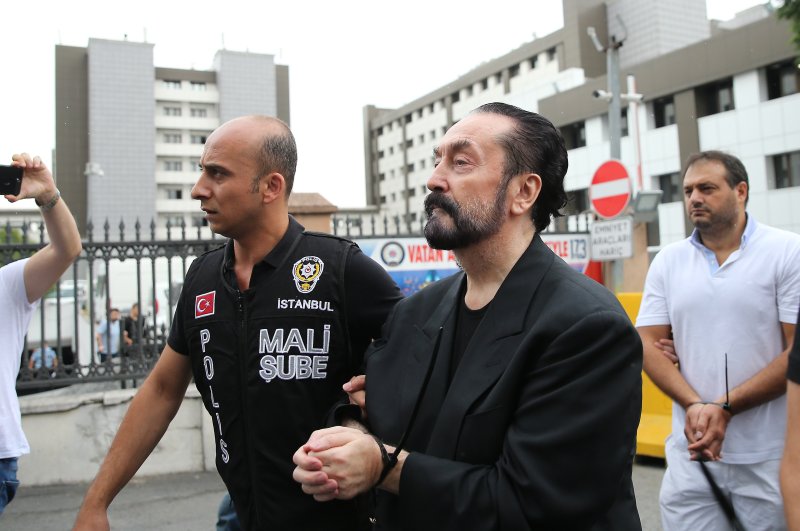 The lengthy trial of Adnan Oktar, a cult leader accused of running a criminal gang, continues with testimonies of former members detailing systematic rape and brainwashing by the gang

"'My dear, how beautiful you are,' Adnan Oktar murmured and shut the door,” Ç.Ç. says. The woman, whose name was not disclosed, was testifying on Monday against the shady leader of a cult accused of running a criminal gang. According to Ç.Ç., Oktar said these words as he watched her being raped by two members of the gang.

It was June 2018 when Turkish police detained Oktar, leader of Turkey's most bizarre and shadowy cult. He was soon arrested and faced a lengthy trial based on accusations of running a criminal organization in disguise. Since the trial began, former members-turned-confessors revealed the shocking inner workings of the cult.

Oktar and 72 others are being tried at an Istanbul court, while 153 others were either released earlier pending trial or remain at large. As the mass trial continues, more members have come forward to confess about the cult, described as a criminal organization by prosecutors. In exchange for giving tangible evidence about the crimes of Oktar and others, former members are set to be handed down lenient sentences.

A 3,908-page indictment calls for hundreds of years of prison time for each jailed defendant on charges ranging from sexual abuse, running a gang and blackmail to torture, money laundering, fraud and attempted murder.

Ç.Ç. was released pending trial and decided to cooperate with authorities to shed light on Oktar and his followers. She was 15 years old when she met her former boyfriend, a man close to Oktar, in 2012. Her boyfriend, Bora Yıldız, who is among the jailed defendants in the case, introduced the young woman to Oktar, who he described as “a father figure.” “I was taken to a place they called ‘studio,’” she recalled, referring to a TV studio used for TV broadcasts and as a residence by Oktar. “When Adnan Oktar saw me, he complimented me. He was saying I was very pretty. I was 17 then. Bora would often ask him what he thought of me, and he’d told him that he found ‘a very beautiful girl.' Oktar was commenting on my body and told Bora to marry me as soon as possible,” she told the court. When her family disapproved of the marriage, Ç.Ç. agreed to a fake marriage with E.T., another member of the cult. She would go to the “studio” more and more after the marriage and told the court she was sexually abused by Oktar and witnessed other women abused by Oktar. She says women he raped were forced to take contraceptive pills.

She says Oktar and other senior members of the cult installed security cameras everywhere in the “studio,” even in her room, and she was forced to have nude photos taken. “They were collecting photos and giving them to other members for blackmail if I'd try to leave them one day,” she told the court.

Another bizarre practice of the cult was Oktar’s constant demand for female members to change their bodies. Ç.Ç. says she was ordered to shave off her eyebrows upon Oktar’s orders. She was also ordered to have the tattoo of a snake on her left arm. “This was to easily identify me. They had my naked photos, and thus, I wouldn’t be able to deny it was me in the photos if they disseminate them,” she told the court.

Emre Teker, another former member who testified in the trial last week, said Oktar convinced his followers that he was “mehdi,” a redeemer of the faith who will appear before Judgment Day according to Islamic belief. “I started believing it after spending one year with them,” he says. Teker also shed light on “turnike,” notorious gang rapes of women persuaded to join the group. “They had a scoreboard, and members would be elected ‘champion’ of the week, day or month based on the number of women they had sexual intercourse with. Those with less number of rapes were accused of being gay,” he told the court.

Oktar is known as a flamboyant televangelist who surrounded himself with surgically enhanced women in his hourslong shows on a now-defunct TV channel his followers ran. The indictment portrays him and his followers as a dangerous cult that exploited gullible recruits and built a criminal empire thriving on blackmail and other wrongdoings. His depiction in the indictment is far from the eccentric personality seen on TV spouting conspiracy theories and anti-evolution discourse. Prosecutors say the gang he led was involved in a recruitment scheme since the late 1990s, and this involved brainwashing young women. "The organization used its good-looking members to deceive young girls and women. Those members raped or sexually abused women and were blackmailed first by members pretending that their affairs were recorded on video. They were brainwashed under the pretext of religious teachings," prosecutors say in the indictment.

Oktar was a household name in the 2000s, but his prominence dates back to the 1980s when he was arrested for "promoting theocracy" for his views. He resurfaced in 1999 when he was charged with blackmail, although he was found mentally ill by a court and spent months in a psychiatric hospital before his release. He made a comeback with a series of anti-evolution books and launched a TV station in 2011.

Mustafa Arular, who joined Oktar’s group in 2007, told the court in a hearing last week that Oktar was in total control, and nobody could do anything without asking him first. He said members were ordered to give all the money they had to the group and could spend money only for themselves in cases of emergency health issues. He also spoke about the “turnike” scheme and said they had “handlers” picking women for rape. “Women were brainwashed to serve ‘brothers’ and winning God’s blessings. All women had to have sexual intercourse with male members whether they consent to it or not,” he says. Arular also said Oktar and his followers sought to prevent people from leaving the group by blackmail and rumors. “If one person decides to leave and seek a job, they’d try to sabotage his or her attempts to find a job,” he said.

Ece Koç joined the group 30 years ago when she was a high school senior. She left the group in 1999 when Oktar was in prison, but her husband, a member of the group, forced her back. “We were not allowed to go out without the company of other members of the group. There were also tight security measures and locked doors to stop people fleeing,” she said. Koç told the court her parents sought to save her and filed a complaint against Oktar, but his cult forced her to defame her family to stop a potential lawsuit. “I was forced to file a complaint against my father and claimed he sexually abused my son because (Adnan Oktar) wanted me to do so,” she said.

“Adnan Oktar was very abusive toward women. He used to slap and kick them. He’d cut their hair,” she said. Koç said she did not witness the “turnike” scheme but knew Oktar was a rapist. “It was clear they did not want to sleep with him, but you cannot disobey him once you are in the group. I personally saw him abusing young girls,” she said. Koç also detailed another scheme of the group to attract rich people. “They use beautiful women to draw rich and good-looking men to the group. Once these men are recruited, they are in turn used to lure young women to the group,” she said.