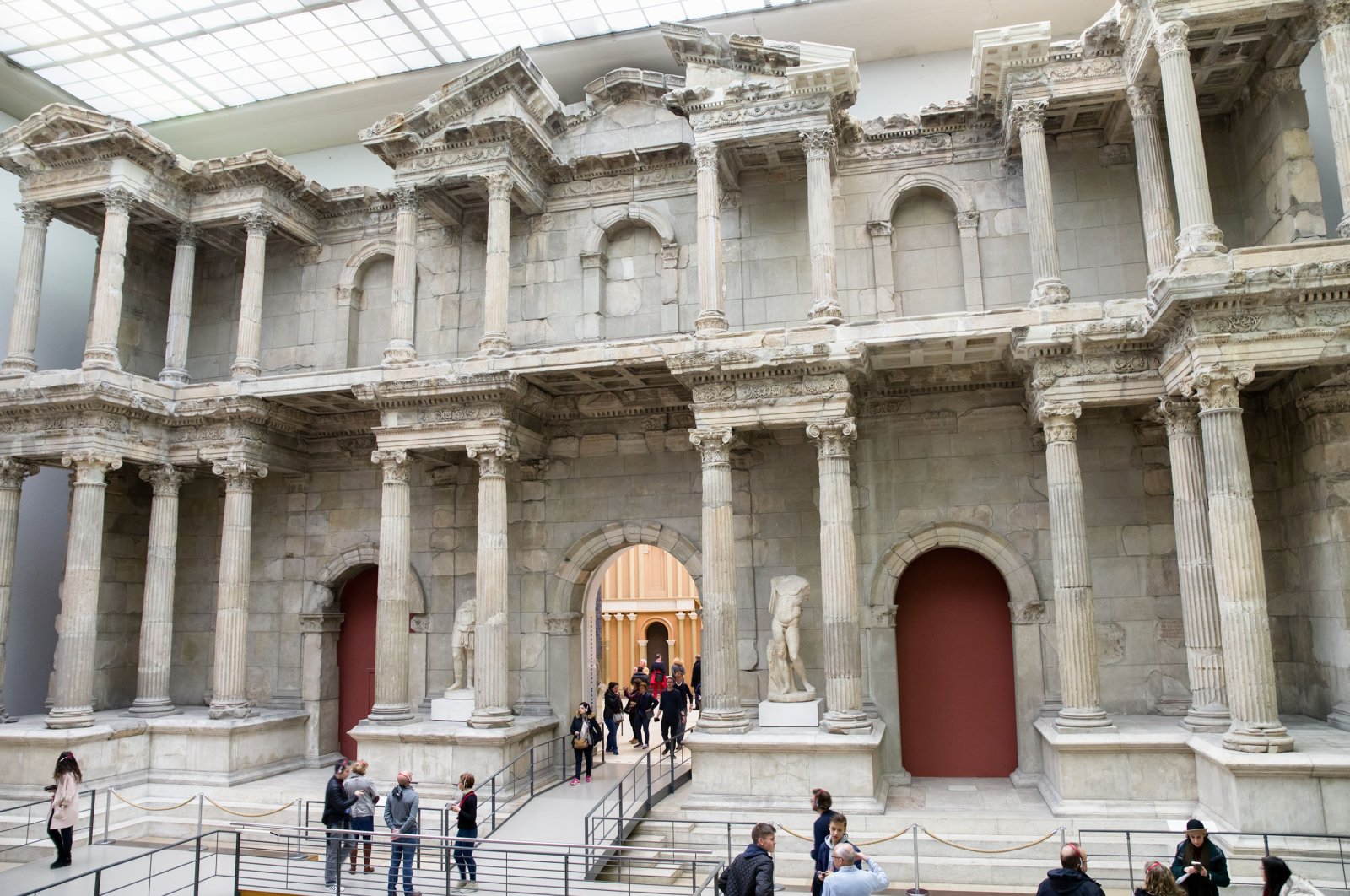 A view of the market gate of the ancient city of Miletus, located in western Turkey, in the Pergamon Museum, Berlin, Germany, April 7, 2017. (SHUTTERSTOCK PHOTO)
by DAILY SABAH WITH AA Dec 07, 2020 3:50 pm
RECOMMENDED

Turkey’s pleas to Germany for the return of artifacts, including a famed statue and a mihrab or qibla niche of a mosque, have fallen on deaf ears.

Legal efforts by the Ministry of Culture and Tourism have failed to secure the return of the mihrab of Beyhekim Mosque in the central province of Konya, which was smuggled out more than a century ago, as well as the Old Fisherman’s Statue taken from the ancient city of Aphrodisias in western Turkey’s Aydın.

The 13th-century mihrab, a tall structure to which the imam turns his face while leading the congregation in prayers, was separated into pieces under the pretext of repairs in 1907 by Germany’s then-Consul General in Konya Dr. Hardeg Loeytved. It is now on display at Berlin's Pergamon Museum, along with a wooden sarcophagus taken from the tomb of a Muslim mystic in Konya. Pergamon Museum, named after the iconic Pergamon Altar, which was also brought to Germany from Turkey, is home to a number of artifacts smuggled by German archaeologists and others during Ottoman times.

The Old Fisherman’s Statue is another artifact Turkey seeks to repatriate, along with tile panels of the Piyale Pasha Mosque in Istanbul. The statue’s torso was sold to an unknown individual by French archaeologist Paul Gaudin who excavated Aphrodisias in 1904. It showed up in the museum years later, while the rest of the statue remains in Turkey. The mosque’s eight tile panels have remained in Pergamon Museum’s collection since 1891.

Turkey and Germany have set up a cultural committee and discussed the return of artifacts, but the committee’s meetings failed to yield results for Turkey. Germany, for its part, claims the artifacts were acquired by legal means, but the Turkish government’s calls to produce the documents to prove the legality of the artifacts' acquisition have gone unanswered.

Artifact smuggling was common in the last decades of the Ottoman Empire when the preservation of remains of ancient civilizations was uncommon. In some cases, archaeologists were allowed to take whatever they could find in excavations they made in the country, while in others, they managed to dodge authorities in the tumultuous final years of the empire.

In recent years, Turkey has stepped up efforts to repatriate culturally important objects. Since 2002, 4,441 artifacts have been returned to Turkey thanks to the government’s efforts, but officials say tens of thousands of artifacts still remain abroad.

Most of the artifacts from Turkey have been smuggled to Western countries like the U.S., Britain, France, Germany and Switzerland, according to Culture and Tourism Ministry officials. Among them are tiles from the Hagia Sophia Grand Mosque that are currently located in Paris' Louvre Museum and a statue of the Greek goddess Tyche (Thyke) in the Brussels Royal Museum of Fine Arts.