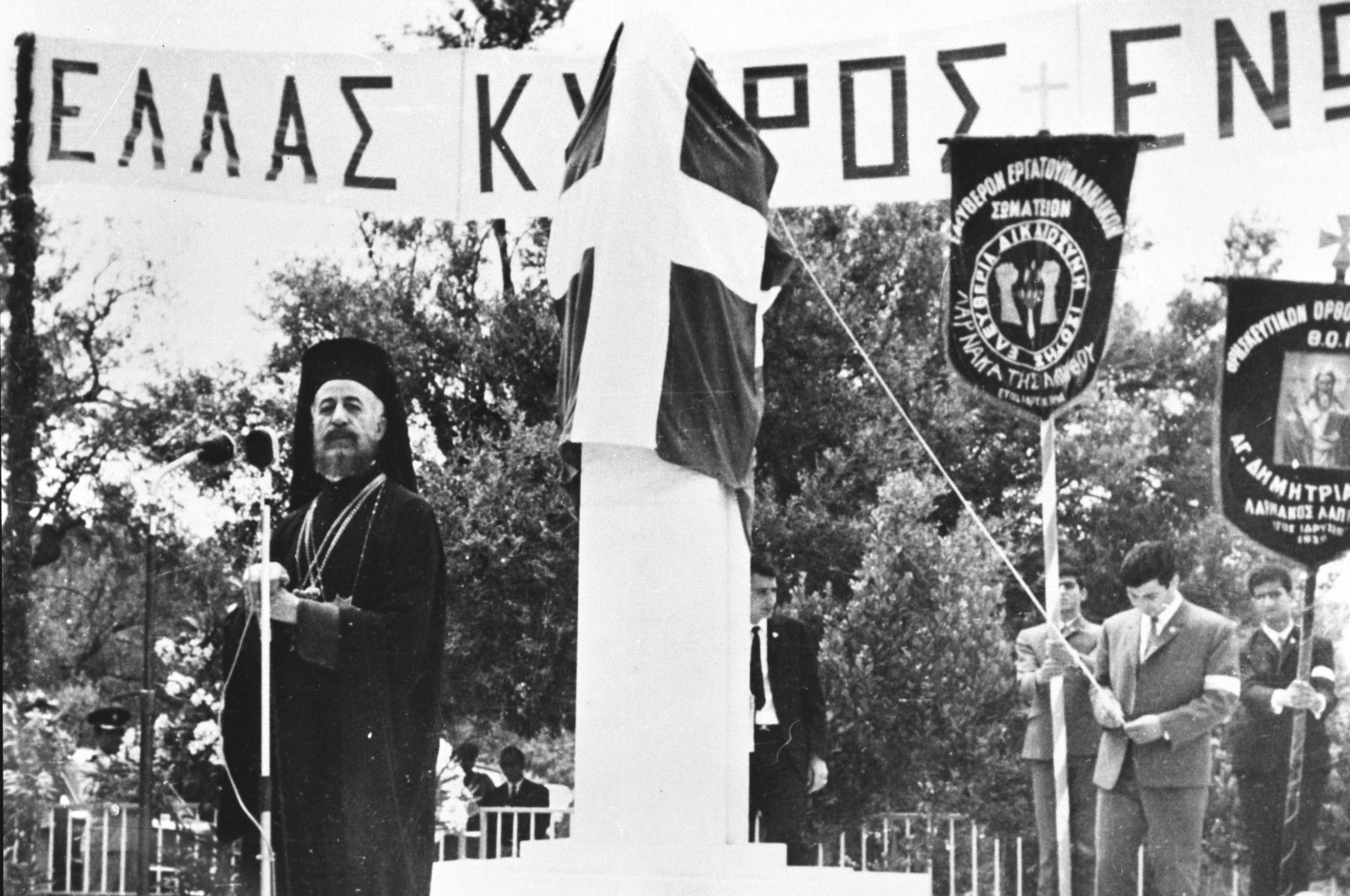 Cyprus President Archbishop Makarios speaks at the opening of an EOKA monument years after the "Bloody Christmas." (AA Photo)
by Daily Sabah with AA Dec 20, 2021 11:51 am
RECOMMENDED

The horrors of deadly, systematic attacks on Turkish Cypriots by the extremist Greek Cypriot nationalist EOKA terrorist group live on in memories as the "Bloody Christmas," 58 years after the events led to hundreds killed and thousands displaced from their ancestral homes.

The events that led to the "Bloody Christmas," also called "Black Christmas" by Turkish Cypriots, started in 1955 with the foundation of the EOKA, led by Georgios Grivas, a veteran officer of World War I and World War II and a staunch opponent of communists and Turks.

Active in Cyprus, then ruled by the United Kingdom, the EOKA targeted not only British soldiers and civil servants but also Turkish and Greek Cypriots who opposed its extreme ideology and its goal of union with Greece.

Until the foundation of the Republic of Cyprus on Aug. 16, 1960, under the guarantors of the United Kingdom, Turkey and Greece, the death toll of the EOKA's ferocious and deadly terrorism campaign included at least 104 British soldiers, 54 police officers (among them 15 Greek Cypriots, 22 Turkish Cypriots and 12 British) and 238 civilians, including 203 Greek Cypriots, seven Turkish Cypriots and 26 Brits.

Under this power-sharing regime of the bilingual Republic of Cyprus that adopted both Greek and Turkish as official languages, the island was to be governed under a Greek Cypriot president and Turkish Cypriot vice president, as well as a 10-person Cabinet – seven from the Greek side and three from the Turkish in a proportion that would also be reflected in the bureaucracy, police and security forces.

While this led many in Ankara and among Turkish Cypriots, who had been present on Cyprus for four centuries, to believe that the Greek political actors were abandoning their maximalist claims on the island with regard to a union with Greece, President Archbishop Makarios and his extreme nationalist team before long started to undermine the republic.

Of the opinion that Turkish Cypriots had gained excessive privileges, Makarios prevented the full implementation of the constitutional provisions relating to public offices assigned to the Turkish side. Furthermore, from early 1961 on, Greek Cypriots started reviving the EOKA terrorist group under the name Akritas, also known as the EOK, aiming to reverse the constitution, severely curb Turks' rights and eventually declare unification with Greece.

The Akritas operated under the guidance of Greek Cypriot officers and used arms obtained from the government armories. On the eve of "Bloody Christmas," as many as 10,000 Greek Cypriots were recruited and underwent weapons training.

Greece's direct and strong support, as well as the ambiguous policies of Western countries including the United States and the United Kingdom, in response to the maximalist demands of the Greek Cypriots, further encouraged Makarios to announce on Nov. 30, 1963, a memorandum that demanded 13 amendments to the constitution that repealed many of the rights of Turkish Cypriots. Turkey, one of the guarantors of the Republic of Cyprus and its constitutional order, as well as Turkish Cypriots, then led by Cypriot Vice President Fazıl Küçük, rejected the amendments.

This prompted the EOKA, with the help of many Greek Cypriot members of the police organization, to launch an attack on the night of Dec. 20, 1963, against the Turkish quarter of Lefkoşa (Nicosia). Storming the home of Turkish military doctor Nihat Ilhan, they killed not only Ilhan's wife Mürüvet and three sons, Murat, Kutsi and Hakan, but also the wife of his landlord, Feride Güdüm.

A photograph of the mother and three sons lying dead in the bathroom has since become a symbol of the brutality inflicted by Greek Cypriot extremists.