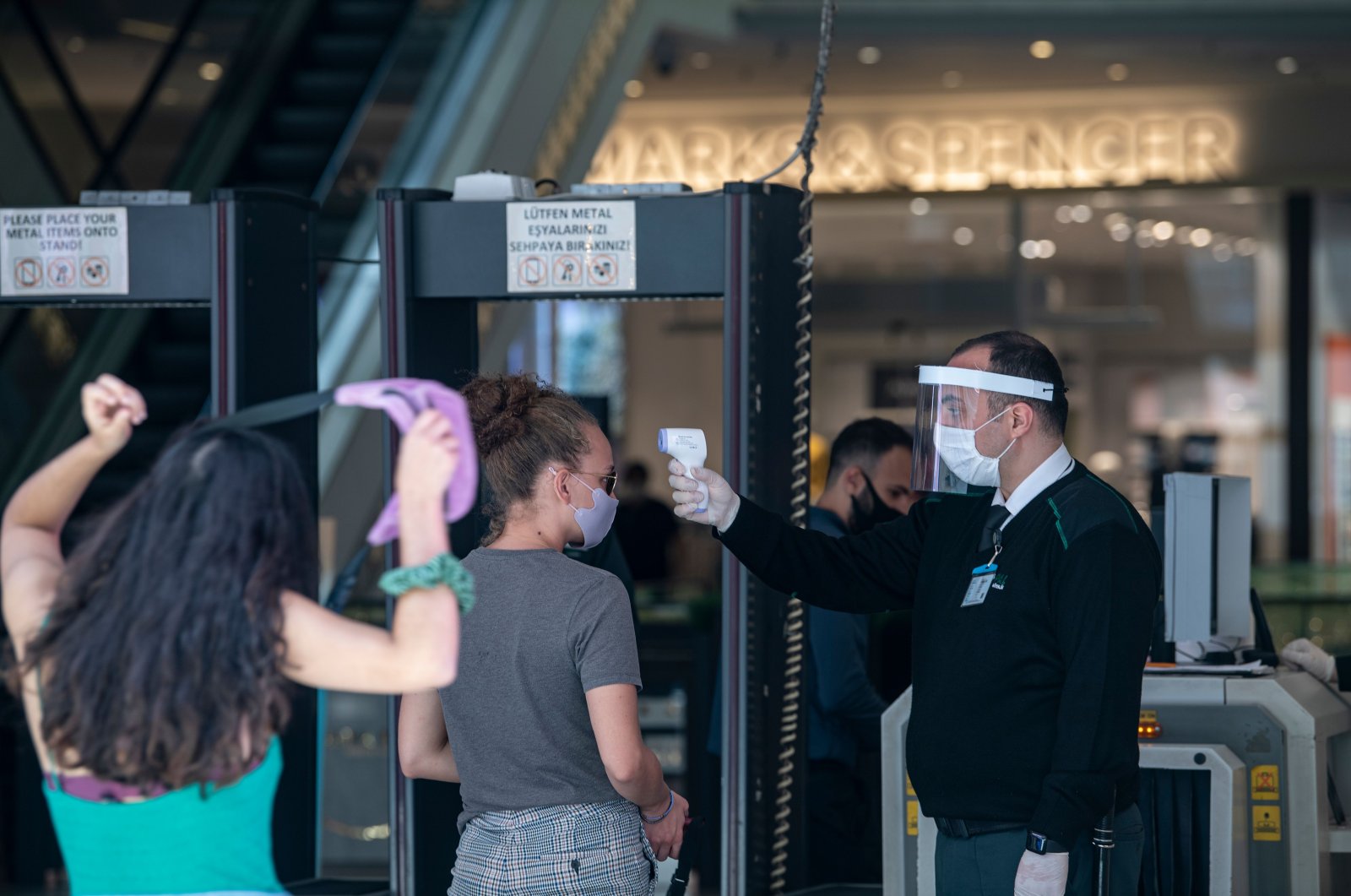 A security officer checks the body temperature of a woman at the entrance of a shopping mall on Istiklal Avenue, Istanbul, Turkey, May 11, 2020. (AFP Photo)
by DAILY SABAH WITH AGENCIES May 14, 2020 2:11 pm

With the number of patients recovered from COVID-19 surpassing 100,000, more than 70% of the country's coronavirus cases, Health Minister Fahrettin Koca said the outbreak is now under control in Turkey

Turkey has registered a constant recovery rate since week five of the outbreak, and the pandemic is now considered under control, Health Minister Fahrettin Koca said Wednesday.

"We have been in steady recovery since week five of the outbreak. Under current conditions, the pandemic is under control," Koca said during a news conference following a virtual meeting of the Coronavirus Scientific Advisory Board.

Attributing the success to the country's increased testing capacity and contact tracing, Koca said a team of more than 6,000 personnel worked diligently day and night to map out the contacts of a confirmed COVID-19 patient to prevent further infections early in the outbreak.

“A team consisting of 6,239 members reached out to more than 722,000 people who came into contact with a confirmed patient. Therefore, people who were likely to have contracted the virus were quarantined before they became carriers and further infected others. We stopped the outbreak from further spreading with close follow-ups. If we have solely focused on the patients alone, it would have been a disaster,” he said.

According to Wednesday’s numbers, the number of recovered patients surpassed 100,000 with 2,826 more released from the hospital after they were declared free of COVID-19. With the improving outlook, people who recovered from the coronavirus now make up more than 70% of the total cases.

Case-wise, 1,639 new patients were confirmed after 33,332 tests were carried out in the past 24 hours. In his press conference, Koca said Turkey now had the capacity to conduct 50,000 tests daily, but there simply is not enough probable patients to fill that quota.

“While we have reached a daily testing capacity of 50,000, we don’t see the reason to conduct that many tests since the outbreak has begun to regress. The rate of positives in tests carried out continues to decline,” he said.

Naming the halt of the spread the end of “phase one,” Koca said Turkey has entered phase two of its fight against the virus.

With dropping numbers, Ankara has begun to ease restrictions placed on daily life. On Monday, Turkey lifted travel restrictions from nine more provinces, leaving only 15 of the 31 initial provinces under travel lockdown.

Curfews placed on the youth and elderly have been somewhat relaxed as well, with those under stay-at-home orders allowed to go out for a limited time once a week. Ankara however, did not show an intention to ease weekend curfews placed on the general population on weekends.

Urging citizens yet again not to ease up on following the advice of authorities, Koca said attempts to go back to daily life before the outbreak would be an unnecessary health risk, both for the person and society in general.

He also warned citizens that going outside without a mask is highly discouraged, if not illegal depending on the laws of the specific province.

“It’s not the same as ruining your diet by eating a bar of chocolate or drinking too much coffee knowing it might give you palpitation. Someone healthy, someone you don’t suspect might infect you with the virus. And you might, in turn, carry it to someone with a weak immune system. Going outside without a mask or using the mask with improper fitting is an irresponsible move,” he said.

Koca’s warnings were the latest in a string of calls from authorities for citizens to not let up on restrictions during the normalization period. Experts on the country’s Coronavirus Science Board and President Recep Tayyip Erdoğan have repeatedly warned citizens that the easing of restrictions did not mean the threat of the virus was over, and failure to follow guidelines might risk a second wave of the outbreak, which would mean the restrictions would return.

Calling the way Turkey handled the virus outbreak an example for other nations around the world, Koca said Turkish doctors and experts were being sought by their foreign counterparts for information sharing.

“International TV channels air our success to their viewers. Doctors from across the world are requesting information from their Turkish counterparts,” he said, also crediting citizens for contributing to the success by following the rules.

“The owner of this success is the 83 million people who followed the rules to the letter.”

Coinciding with his words and shortly before appearing in front of the press, Koca held a teleconference with the World Health Organization's (WHO) regional director for Europe.

Koca and Dr. Hans Kluge discussed the number of coronavirus cases, recovery rates, treatment algorithms implemented by Turkey and normalization steps in the country, according to a statement from the Health Ministry.

Calling Turkey an important and powerful cooperation partner, Kluge stressed the importance of carrying out a study on Turkey’s COVID-19 fight.

“I will be very happy to work (with Turkish experts) to document the great Turkish experience in the COVID-19 response,” he added.

“I was very impressed by your presentation at the meeting of ministers of health of the Turkic Council,” he said referring to a videoconference meeting in late April between Turkey, Azerbaijan, Kazakhstan, Kyrgyzstan, Uzbekistan and the WHO.

“All the Central Asian countries are telling me how much they appreciate the solidarity of Turkey,” he said.

“Thank you very much for the great example of international leadership and solidarity,” Kluge added.