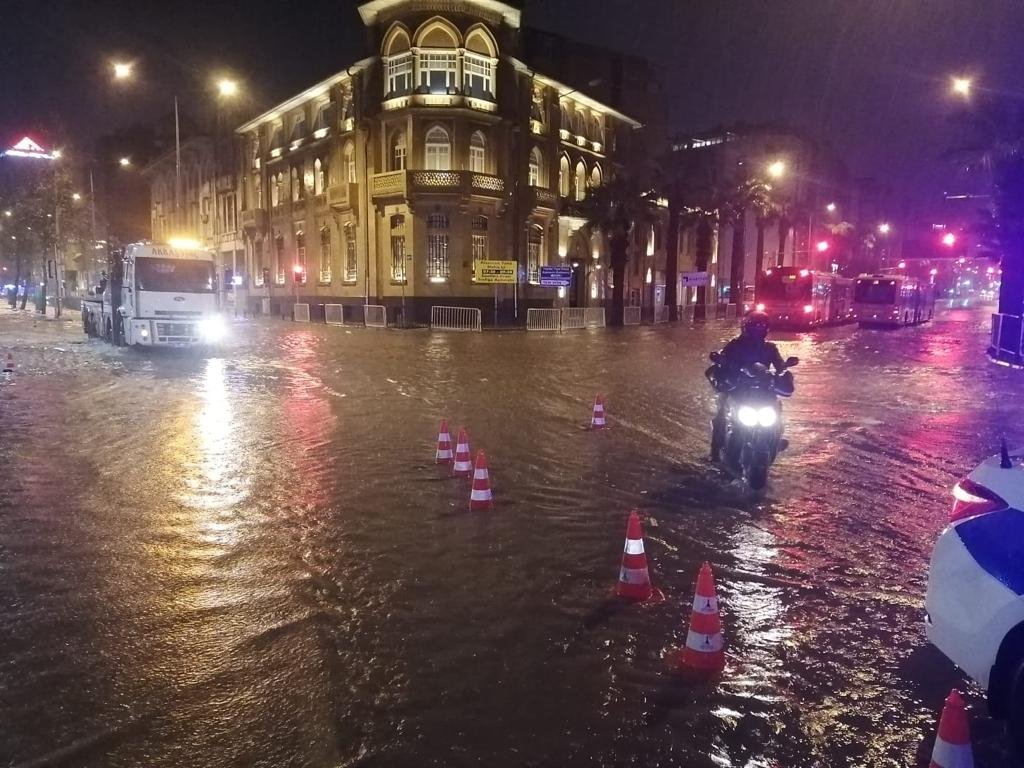 Long-awaited rainfall arrived Tuesday in western Turkey in the form of heavy downpours that flooded houses and shops and left vehicles stranded in the streets. The eastern part of the country, however, is experiencing extraordinary temperatures as thermometers saw record highs in some cities.

The residents of many provinces, especially in western Turkey, had been hoping for rainfall due to dangerously low water levels. In Istanbul, for example, water levels in dams supplying the main grid face a grave risk after decreasing to 19.79% capacity as of early January, the lowest in the past 15 years. Due to a lack of precipitation, the faithful even resorted last month to the well-known Muslim tradition of raising their hands after Friday prayers at mosques all across the country in a rare nationwide petition for rain, heeding calls by the religious authority amid drought concerns.

The tips and taps of rain finally began falling from the sky in many provinces over the last weekend. The intensity of the rain increased gradually over Monday and saw a peak level on Tuesday. Severe thunderstorms brightened the sky, bringing heavy rainfall, probably more than the residents expected.

The floods disrupted life in western İzmir, with waters inundating houses and shops. Locals rushed to clear floodwaters from shops and ground-floor residences. Especially motorcycle couriers, whose number has been greatly increased during the pandemic due to increasing demand on home-delivery foods, waded through knee-deep water to get off major roads. Locals saved a 66-year-old woman who had been swept away by fast-flowing floodwaters and was stranded under a truck in the Buca district.

The city center received 77.9 kilograms of rainfall per square meter. According to officials from the Directorate of Meteorology, the districts around Gulf of İzmir were affected the most by precipitation. They added that most of the precipitation fell in six hours, which prevented the absorption of water in the surface and thus caused floods. Officials expect that rainfall will continue tomorrow especially in higher districts such as Ödemiş, Bayındır and Tire, but the velocity of rain will decrease.

The southern resort city of Antalya was also seriously affected by rainfall. Due to the storm, which reached 85 kilometers per hour, 5-meter-tall waves occurred on the province’s famous Konyaaltı Beach. Some trees and solar energy systems on the roofs of houses in the Konyaaltı district collapsed, and the ground floors of some apartments were flooded. The sea turned the color of mud, and the waves reached the roads along the coast. The residents who came to Konyaaltı Beach to exercise recorded huge waves with their mobile phones.

Thunderstorms and strong winds also disrupted daily life in the Muratpaşa, Döşemealtı and Kepez districts of Antalya. According to local officials, nearly 100 kilograms of rainfall per square meter fell in some places in the Döşemealtı district. Fire brigades of Antalya Metropolitan Municipality continue their work in the areas where locals requested emergency assistance.

Yet, in the central and eastern parts of Turkey, the temperature is above the seasonal norms. In central Sivas province, the highest value in January was recorded since 1930 as the temperature rose to 18 degrees during the day. According to Directorate of Meteorology data, average temperatures were higher than seasonal norms last month in the Aegean, Marmara, Mediterranean and Central Anatolian regions as well as in the coastal parts of the Black Sea region, and in southeastern Şırnak, Şanlıurfa and Mardin provinces.