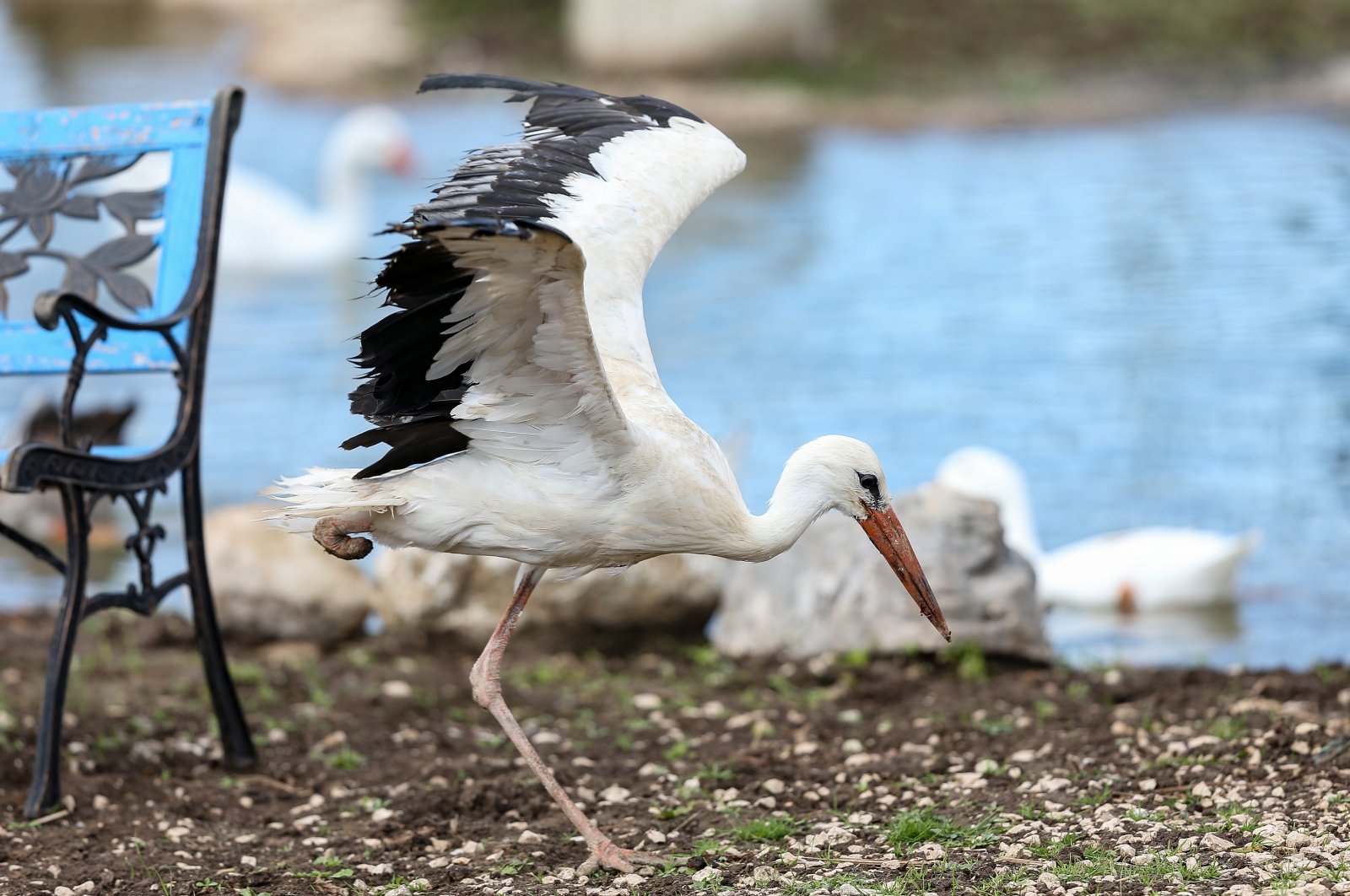 Three storks injured on their seasonal migration route and no longer able to fly were brought to the charmingly named 'Retired Animals Farm' in Bursa, where they are carefully cared for together with other 'retired' animals at the farm

Three storks were rescued in southeastern Turkey's Diyarbakır after suffering injuries on their annual migration between Africa and Europe. The storks, given the names Leyla, Ebrar and Begüm, will spend the rest of their lives at the Turkish Animal Rights Federation's (HAYTAP) farm in Bursa. Unfortunately, due to their injuries, the animals cannot fly, and a prosthesis will be made for Leyla, who has difficulty walking because a large part of one of her legs is missing.

With Turkey's strategic geographical position nestled between Africa and the Eurasian landmass, the country is also a popular route for migratory birds flying to Africa from Europe due to its location between the continents. Tens of thousands of birds of different species migrate to Africa from Europe in the autumn, traveling above the skies of Turkey, before they return home in the spring, using the same route. The country's wetlands in the provinces of Hatay and Adana, serve as a stopover and gateway for intercontinental migratory birds arriving from Africa.

Some of the birds seem to make a nice tour of Turkey on their route across the country, stopping in Ankara and Istanbul on their way to Africa.

The three rescued storks who were unfortunately injured on their seasonal migration route and could no longer fly, were brought to HAYTAP's "Retired Animals Farm" in Bursa, where they are carefully cared for together with other animals at the farm.

Injured in southeastern Turkey, the injured wings of two of the three storks on the migration route were amputated by veterinarians. One of the storks has only one leg and the necessary prosthesis studies have been started in this regard. The storks, which will not be able to fly again, were brought to the "Retired Animals Farm." The Storks live in harmony with cats, goats, lambs, donkeys, ducks, calves and dogs on the farm. Numerous types of injured animals are brought to the farm in Bursa, which was chosen as a pilot province by HAYTAP about two years ago.

HAYTAP established special areas for the cows, sheep and goats injured in the forest fires in the region, especially in the Manavgat district of Antalya last summer. By establishing these special areas the animals continue their treatment by bringing these animals to the farm in Bursa.

The three injured storks, which became in need of care because they could not fly, were also sent to the Retired Animals Farm. The storks Leyla, Ebrar and Begüm, which will spend the rest of their lives here, have become the focus of attention of the farm.

Work was started to make a prosthetic leg for Leyla, who could not fly and had trouble walking because one of her legs was severely damaged.

'All life is meaningful for us'

Speaking to Demirören News Agency (DHA) Emre Demir, HAYTAP's Bursa representative, said: “Unfortunately, storks have been injured in various accidents in the southeast region and have come to a point where they cannot migrate. The wings of two of them were amputated. They now live with one wing. And one of them has one leg. We have started the necessary prosthesis studies regarding this. If medically possible, we will make a prosthetic leg. It is very meaningful for us that they hold on to life despite their obstacles, that they are still alive and that they do not give up on life. We are really happy that this farm serves its purpose. Normally accustomed to wildlife, storks are not really easy to care for. They need special feeding. We take care to care for them in the best and appropriate way.”

'Instead of letting them die, we embraced them'

Demir said, “We had winged animals such as ducks and geese, but the stork was a little different for us. Are you happy with this situation? Of course, we are not. Our heart wishes that they could continue to migrate, fly, and live a freer life like their other friends. But unfortunately, there is reality, which is the accident they suffered. Of course, instead of leaving them to die, we opened our arms here."

Demir told Anadolu Agency (AA) that Turkey is home to many animals from various regions.

Stating that they aim to set an example for other metropolitan cities, he explained that they have made progress on the subject.

Emphasizing that most of the animals on the farm were brought here with tragic stories, Demir said: "Some of them were injured in the fire, some of them got stuck on razors in a minefield. Even though most of them are disabled, they can live a lifetime if looked after correctly."

Demir stated that after a general health examination, they thought about how they could take better care of the animals and made plans accordingly.

Demir gave information about the condition of his new guests and said: "There is nothing we can do about the storks whose wings were amputated, but we conducting a study on providing Leyla (the stork) with a prosthetic. We will start working when we find the right specialist. We have faith and say, 'If there is love, there is no obstacle.' We believe that we will overcome this obstacle as well. Even if a wild animal is a stork, they can feel it when you love them. We can feel that happiness when we love them. The biggest common thing of animals that come here is fear. They wonder, 'Will something happen to me?' After a while, we can be as close to them as we are with the cats and dogs here."

Leyla, Ebrar and Begüm will now enjoy their retirement under the careful watch of the professionals at the farm.