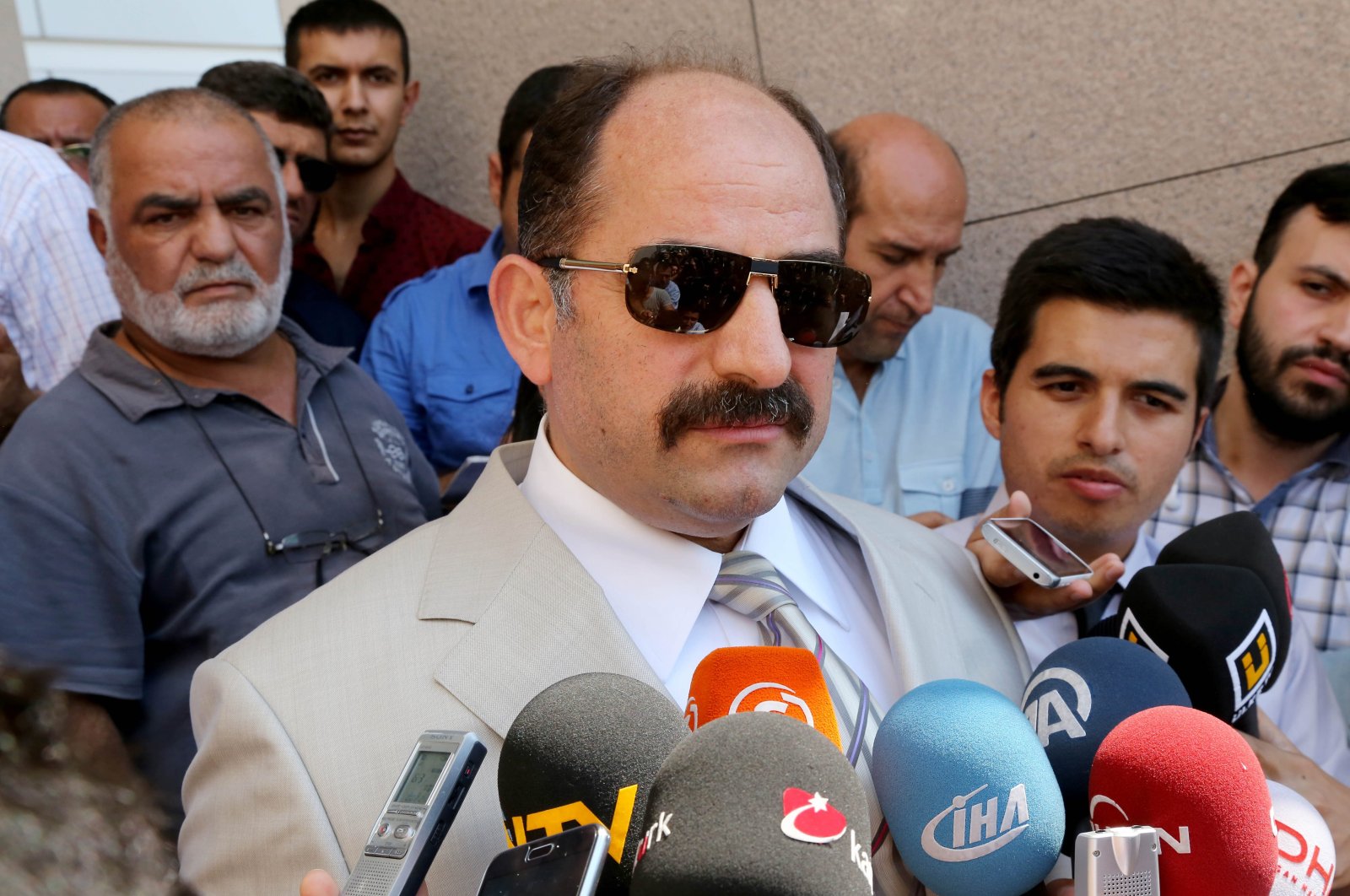 Zekeriya Öz, a former prosecutor wanted for his links to the Gülenist Terror Group (FETÖ), speaks to reporters outside a courthouse in Istanbul, Turkey, Aug. 6, 2014. (AA Photo)
by DAILY SABAH WITH AA Nov 27, 2020 2:04 pm

“We were angered, we protested, we fought, we screamed, but it did not happen,” is how Interior Minister Süleyman Soylu summed up Turkey’s struggle to get Interpol to issue red notices or international warrants for fugitive suspects of the Gülenist Terror Group (FETÖ). Soylu was answering lawmakers’ questions late Thursday at Parliament on the country’s international efforts to bring FETÖ suspects to justice.

The minister said they were “fighting” for the extradition of FETÖ’s members who fled abroad over the past four years following the July 15, 2016 coup attempt perpetrated by military infiltrators in the group. He complained that Interpol rejected most their red notices applications and those that were approved were later suspended.

“We want every suspect, including Zekeriya Öz and Adil Öksüz, but they ignore us,” the minister lamented.

Öz was one of the three prosecutors affiliated with FETÖ that was behind the terrorist group’s first coup attempt in 2013 under the guise of a graft probe targeting ministers. Zekeriya Öz and prosecutors Celal Kara and Mehmet Yüzgeç, with the assistance of police chiefs linked to the terrorist group, carried out the controversial probes. The probes were labeled as judicial coup attempts by the Turkish government on the basis of the use of illegal wiretapping and falsified evidence. Öz was also behind several sham trials orchestrated by FETÖ to imprison the terrorist group's critics.

Öksüz is a former theology lecturer who disappeared after the 2016 coup attempt, which he is accused of orchestrating along with the terrorist group's military infiltrators. He is suspected of acting as a group handler for military officers loyal to FETÖ’s leader Fetullah Gülen.

A secret witness in an investigation into the terrorist group had testified in a trial that Öz was among prominent FETÖ figures protected by the intelligence service of Germany where he was reportedly in hiding. Öz and Kara were reportedly in Germany’s Freiburg, Turkish media outlets reported two years ago. Turkey had sought an international arrest warrant for them earlier.

Escaping prosecution for links to the coup attempt and FETÖ, hundreds of military officers and civil servants have applied for asylum in Germany since the 2016 attempt.

Öksüz, who remains the main suspect in a number of trials related to the coup attempt, had disappeared after a court controversially released him following his capture at a military base in the capital Ankara, immediately after the coup attempt was quelled. He was last spotted in his hometown of northwestern Sakarya, but years of searching have found out nothing about his whereabouts. When reports emerged that he was hiding in Germany, Turkey sought clarification on the matter from Berlin, but Germany was silent except for remarks by the government saying the issue was being investigated.

The accusations leveled against Interpol by Turkey first surfaced in 2018 after media reports emerged that the international police organization refused to issue red notices for FETÖ members over negligence in the application process. Ankara has denied the reports and blamed “complications” in Interpol policies on the matter.

After the July 2016 coup attempt, Turkey canceled the passports of those primarily connected to FETÖ and submitted their information to Interpol databases with red notice requests.

"However, the Interpol General Secretariat removed passport cancellations and our authority to add new data to the database," the Interior Ministry and Justice Ministry said in a joint written statement in May 2018. "The main reason for the ineffective use of Interpol channels is that Interpol insists on denying the bloody actions of the FETÖ armed terrorist organization as an act of terrorism," the statement said.

Turkey launched an international legal struggle against FETÖ following the 2016 coup attempt. Despite cooperation from some allies and friendly countries, Ankara faced obstacles in the extradition of a large number of FETÖ suspects. The U.S. stands out in particular, as Gülen lives in a retreat in Saylorsburg, Pennsylvania. Turkey has issued multiple extradition requests to the U.S. for Gülen, but despite close relations between the two countries, the requests have fallen on deaf ears. So far, Turkey has sent seven folders full of evidence implicating Gülen in a number of criminal cases in Turkey, but Washington has failed to take steps toward extradition. The first request was sent four days after the 2016 coup attempt and, although the U.S. condemned the illegal operation, it was reluctant to deport FETÖ members to Turkey.

Those in the upper echelons of the group also reside in the U.S., including Cevdet Türkyolu, one of Gülen’s aides, and Kudret Ünal, Gülen’s doctor. Other prominent figures from the group, such as journalists Ekrem Dumanlı and Emre Uslu, former footballer Hakan Şükür and businessman Ihsan Kalkavan also settled in the U.S. before and after the 2016 coup attempt.

The Justice Ministry has requested the extradition of more than 800 members of the terrorist group from 105 countries, including the U.S., Germany, Romania and Belgium. More than 110 FETÖ members have so far been extradited to Turkey from 27 countries. Last week, a senior FETÖ figure was brought from Algeria. Soylu hailed the move and thanked Algerian President Abdelmadjid Tebboune.

They came after prosecutors in Istanbul issued warrants of arrest for 44 suspects for infiltration into the Turkish Armed Forces (TSK).

While 33 suspects were arrested in the operations, police delivered notifications for the arrest of two suspects under COVID-19 quarantine and another abroad. The hunt for the remaining eight suspects is underway. Four of the arrested suspects were active-duty soldiers.