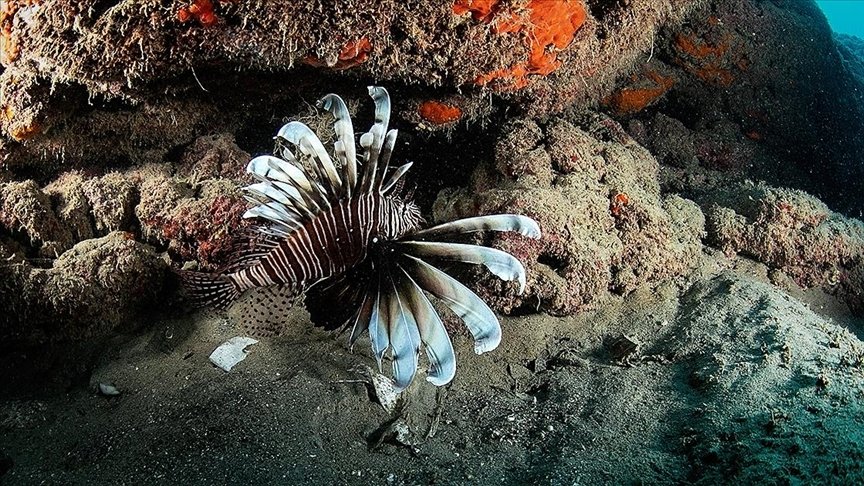 Lionfish, a venomous species that dazzles people unfamiliar with its bright colors and distinct fins, has emerged as a threat in Turkey’s Aegean Sea, experts warn. An invasive fish that originated in the Red Sea, and though not harmful to humans, it preys on smaller fish that call the Aegean home. It will likely upset the ecosystem if not contained, maritime scientists say.

Like other invasive species, the fish swapped its habitat for Turkish waters due to the climate crisis that provides appropriate conditions for species foreign to a habitat. As a matter of fact, the lionfish first made its foray into the Mediterranean Sea in the early 1990s via the Suez Canal. Since 2012, it has been more prevalent on the Aegean coast, particularly off Izmir, the largest Turkish province along the coast.

Hamdullah Aras, a professional diver in Izmir’s Karaburun, says they started coming across lionfish more and more and their population is concentrated off the coast of Seferihisar district. “It is not venomous unless you touch it. It has been long popular among underwater photographers due to its colorful body and we even had people specifically coming here to take photos of lionfish,” he told the Anadolu Agency (AA) on Monday.

Professor Murat Bilecenoğlu, a hydrobiology expert from Adnan Menderes University, says the first sightings of lionfish occurred off the coast of Iskenderun in Turkey’s south and in less than five years it became prevalent along the Izmir coast. Bilecenoğlu said that it was highly resistant to the temperature and salinity of the water, allowing it to thrive easily. He said that the scientific community is worried about its progress across the Aegean.

“As long as the Suez Canal is open, we will see more invasive species here,” he said. Bilecenoğlu added that the lionfish posed a threat particularly to the fish living near the coast, its “main food.”

Professor Okan Akyol from Ege University told AA that dusky grouper and white grouper are among the main predators of lionfish, but their numbers have decreased in Turkish waters due to heavy fishing. “Groupers are included in fishing bans, but illegal fishing threatens them,” he lamented. Akyol says lionfish are used as seafood and campaigns to promote its consumption may aid in its eradication.