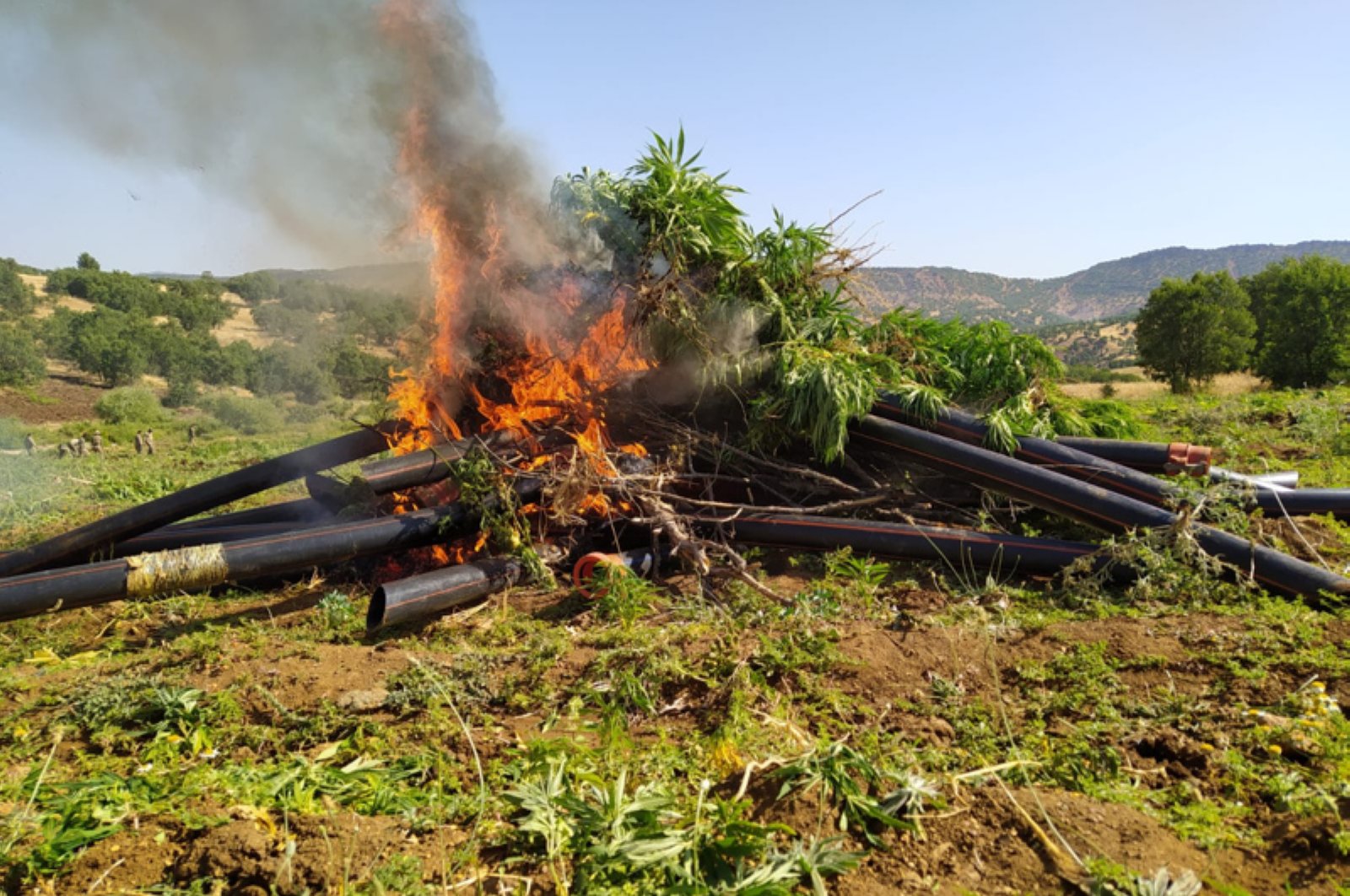 Seized cannabis roots and irrigation pipes are being destroyed in a field following a gendarmerie operation in the Lice district of Turkey's southeastern Diyarbakır province, July 10, 2020. (Diyarbakır Governorate via AA)
by DAILY SABAH WITH AA Jul 10, 2020 1:40 pm
RECOMMENDED

The local gendarmerie command has successfully completed its operation against drug smugglers and PKK terrorists in the villages of Yalaza, Ortaç and Esenli in Lice district, the Diyarbakır Governorate said in a statement.

As part of the operation, gendarmerie officers seized some 9.18 million cannabis roots in raids on 83 addresses and around 1.18 tons of marijuana hidden in a bag in a rocky place, it added.

Seized roots and marijuana, as well as some 11-kilometer-long (6.8 miles) water pipes, one pump and eight engines used in cannabis cultivation, were destroyed on site.

It stressed that operations will resolutely continue to ensure peace and security in the region.

Active in the country since the 1980s, the PKK targeted civilians, soldiers and police officers for decades, killing thousands of people. Its attacks are mainly focused in southeastern Turkey where it recruits militants as well.

In recent years, Turkey stepped up efforts to cut off drug supplies to the PKK, which is believed to be the largest narcotics trafficker to Europe with Interpol estimating up to 80% of European illicit drug markets being supplied by PKK-controlled trafficking networks. Apart from playing a key part in the drug trafficking between Europe and Asia, the terrorist group uses several regions it controls in northern Iraq and Syria as production hubs for heroin and other drugs.

Lice, known as the place where the PKK was founded in 1978, has been on the receiving end of anti-drug raids in the past as well. A small district with a population of about 26,000 people, Lice has a slow economy apart from agriculture and livestock breeding and had the unfortunate fame of becoming a hub of PKK-controlled drug production. Experts say Lice and the southeastern region are favored for the cultivation of cannabis because its climate is favorable and because the mountainous terrain hinders easy access by security forces. Although no concrete numbers are available, authorities believe about two-thirds of the illegal cannabis cultivated in Turkey is grown around Diyarbakır.