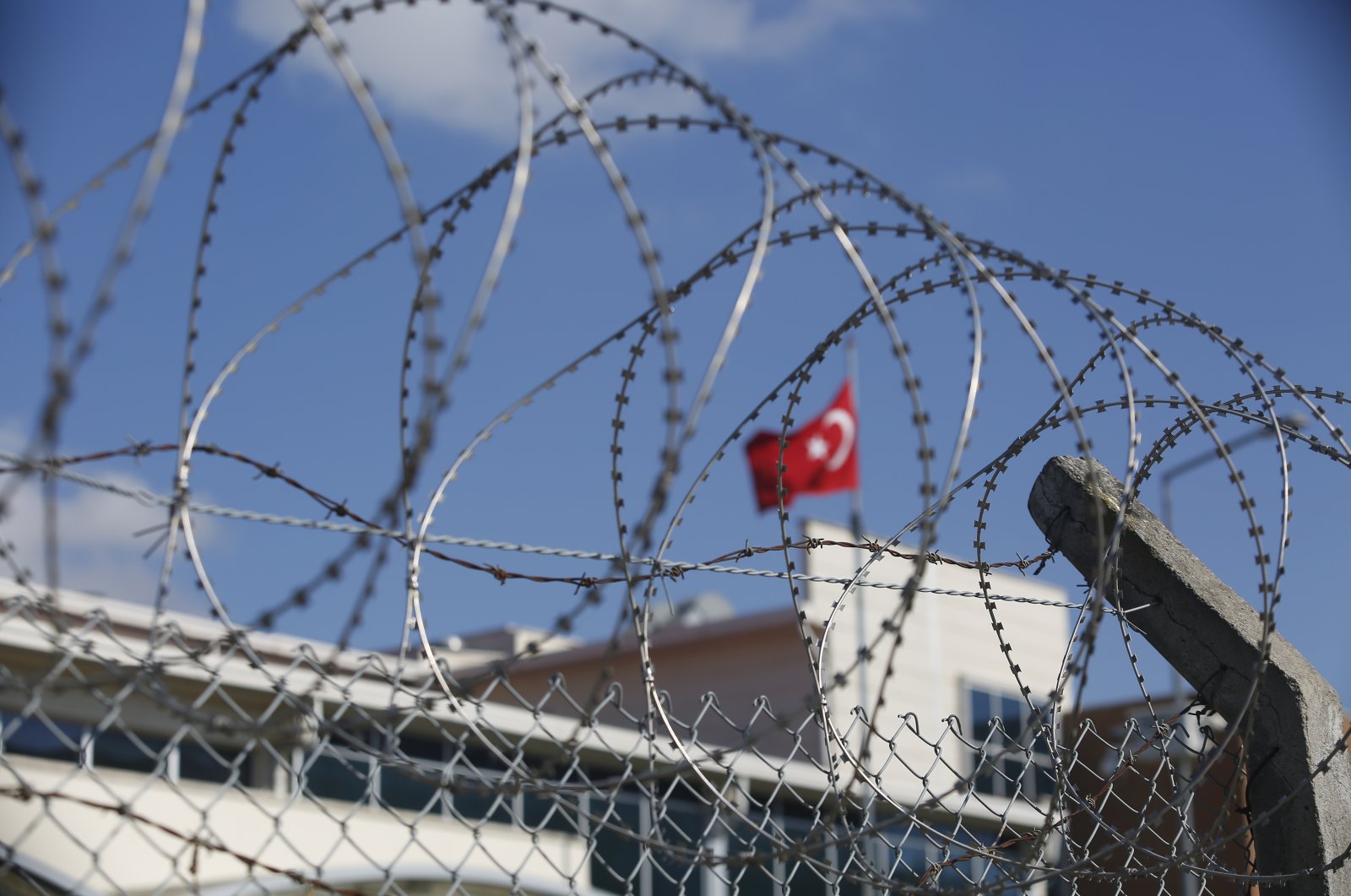 A Turkish flag behind the barbed-wire fence of the Silivri courthouse, in Silivri, outside Istanbul, Turkey, before the trial of Abdulkadir Masharipov, the main suspect in an attack that left 39 people dead at an Istanbul nightclub in 2017, Sept. 7, 2020. (AP Photo)
by DAILY SABAH WITH AA Sep 07, 2020 7:39 pm
RECOMMENDED

A Turkish court on Monday sentenced the Daesh terrorist who killed 39 people at an Istanbul nightclub in 2017 to 40 aggravated life sentences plus 1,368 years in prison.

Istanbul's Heavy Penal Court No. 27 sentenced Uzbek national Abdulkadir Masharipov for violating the Constitution and the deliberate killing of 39 people, including a police officer.

Masharipov was also sentenced to 1,368 years in prison for the attempted murder of 79 people and violating firearms law.

In addition, Ilyas Mamasaripov, who faced charges over being one of the planners of the terrorist attack and helping Masharipov, was sentenced to 1,432 years in prison for aiding in the murders and attempted murders, among other offenses.

At least 39 people, including a police officer, were killed when Masharipov, armed with an AK-47, opened fire on New Year's Eve revelers at the Reina nightclub in Istanbul's Ortaköy district in the early hours of Jan. 1, 2017.

The fatalities included 27 foreigners, and 79 people were wounded.

Masharipov, 34 at the time of the attack, was arrested at a Daesh hideout in the residential Istanbul neighborhood of Esenyurt after a 17-day manhunt.

He was among 18 defendants detained as part of the case. Other than Mamasaripov, the others have either evaded justice as fugitives or been released pending trial.

Masharipov has been mostly silent during the hearings, and in his first oral defense, he denied the charges against him, claiming he was not the attacker despite mounting evidence against him. Other defendants in the case include Daesh suspects charged with having instructed him to carry out the attack, having helped him hide from authorities while on the run or being fellow members of the terrorist group.

An indictment concerning the attack includes requests from the families of the 39 victims as well as 122 others injured or mentally affected by the attack.

Prosecutors asked for 40 back-to-back life sentences for Masharipov for the killing of 39 people, as well as on the charge of "attempt to overthrow the constitutional order" – the crime with the highest sentence under the Turkish penal code. Additional charges against the suspect include membership to a terrorist group, attempted murder and violation of the Firearms Law, which carry prison terms ranging from seven to a combined 2,370 years.

Turkey's efforts against Daesh made it a primary target for the terrorist group, which carried out numerous gun and bomb attacks targeting security forces and civilians. These included the country's deadliest terror attack, which killed 102 people and wounded 400 others in a twin suicide bombing at a rally in the capital Ankara on Oct. 10, 2015.

Last week, the Interior Ministry announced that police detained the top Daesh figure in the country, the so-called “Turkey emir,” in operations in southern Adana province. Mahmut Özden was plotting attacks against Hagia Sophia Grand Mosque in Istanbul, politicians and prominent figures in the country, according to Turkish officials.

His detention followed the arrest of a Daesh suspect who was caught with guns, ammunition and plans to carry out an attack near Istanbul’s famous Taksim Square. Masharipov was also accused of plotting an attack at the square, and a video showing him scouting possible points of attack emerged after the Reina massacre.