Traffickers behind Syrian toddler death get 125 years each 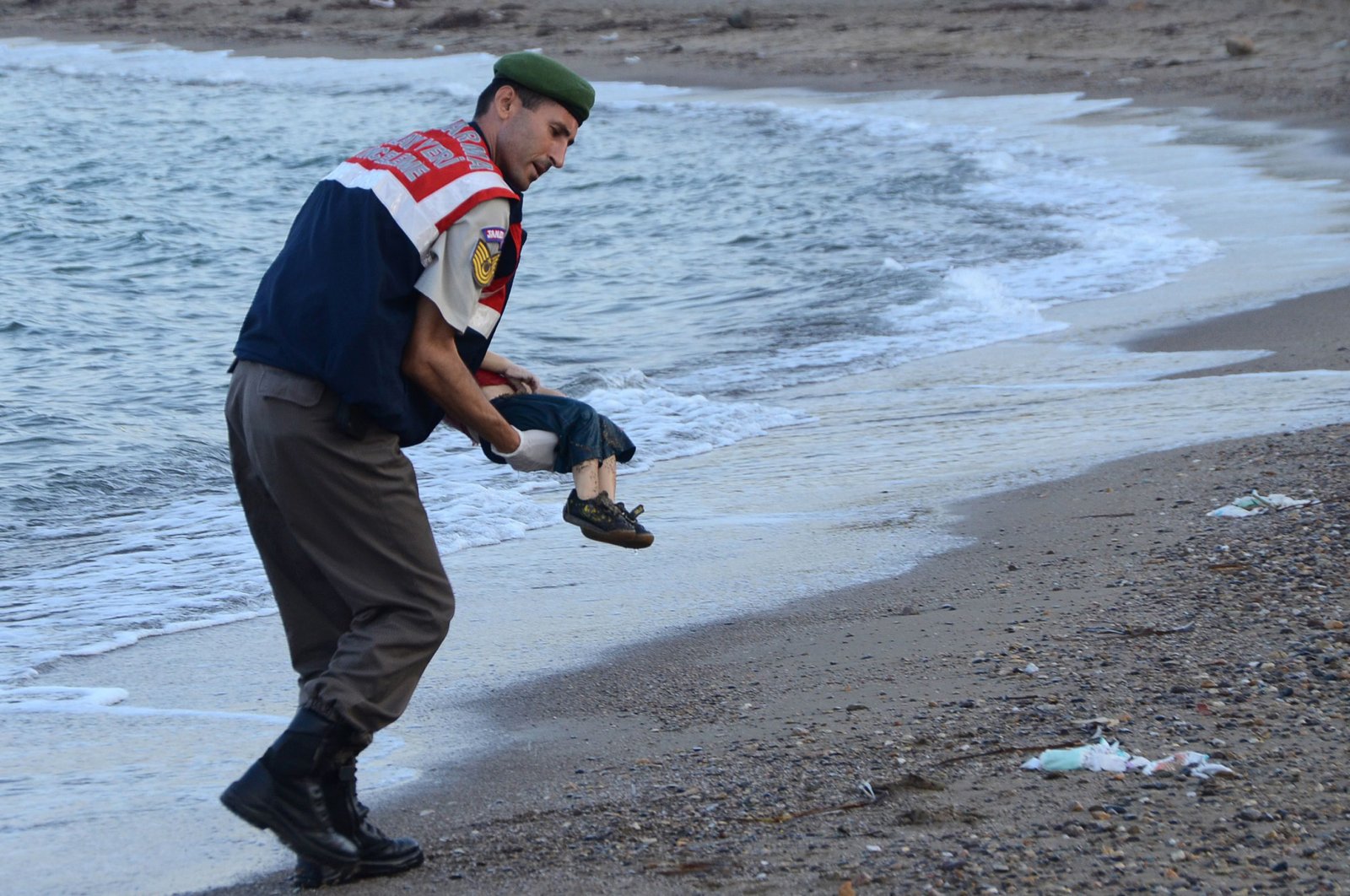 Three members of the human trafficking ring whose activities led to the death of Syrian toddler Aylan Kurdi, in a case that made headlines worldwide, were each sentenced to 125 years in prison by a Turkish criminal court on Friday.

The 2015 death of 3-year-old Kurdi, as well as five other refugees who shared his boat in the Aegean, shocked the international community and came to symbolize the plight and desperation of Syrian refugees.

The traffickers had evaded arrest until their capture by Turkish security forces this week in the southern province of Adana.

The lifeless body of Kurdi – one of 14 Syrian refugees, including eight children, who took a boat on the Aegean to reach the Greek islands – washed up on a beach near the Turkish resort town of Bodrum, in the southwestern province of Muğla.

A number of Syrian and Turkish defendants were found to be responsible for the accident and all received prison terms. However, the three defendants sentenced Friday had fled during the trial. The identities of the defendants have been determined as Cebrail Enkadur, Ecevit Bülent Gökalp and Ali Can Şaş.

Bodrum High Criminal Court in Muğla sentenced the defendants for the crime of "killing with eventual intent." The traffickers received a collective total of 546 years in prison.

Back in 2015, the father of Kurdi, Abdullah Kurdi, paid smugglers to take him and his family from Turkey to Greece after the Turkish government would not grant them the exit visas needed to enter Canada, where their relatives were living as refugees.

However, their September 2015 journey across the Aegean ended in tragedy after the flimsy inflatable boat sank in rough seas.

Eleven refugees died, including Kurdi's wife Rehanna and their two young boys, Ghalib and Alan — or Aylan as his name was widely transcribed in the anglophone press at the time.

The images of Aylan – wearing a red T-shirt, blue shorts and black shoes, and lying face-down in the surf – sparked outcry around the world and led to demands that more should be done to protect those making the perilous journey from Western Asia and North Africa to Europe.

But the rise of anti-immigrant movements across Europe in response to the spike in arrivals in 2015 has seen governments seek to stem the numbers amid continuing rows over who should take those who do make the dangerous voyage.

Muwafaka Alabash and Asam al-Farhad were arrested following the incident in September 2015 and were sentenced following a trial at a court in Bodrum in southwestern Turkey, from where Kurdi and his family departed hoping to reach the nearby Greek islands. The court ordered the imprisonment of the two men for four years and two months on charges of human trafficking, but acquitted them of charges of manslaughter by gross negligence. Prosecutors initially sought prison terms of up to 35 years for each of the two defendants for causing multiple deaths due to gross negligence and human trafficking, but the charges were ruled out due to lack of evidence.

Turkey has been a key transit point for asylum-seekers, refugees and migrants seeking to cross into Europe to start new lives, especially those fleeing war and persecution, with charity Sea-Eye saying it has had to save more than 14,000 people from drowning in the Mediterranean in more than 60 missions since it started operating in 2016.

The country's Aegean provinces of Çanakkale, Balıkesir, İzmir, Muğla and Aydın are prime spots for refugees leaving for the EU, with many Greek islands lying within sight of the Turkish coast.

In order to reduce the number of illegal migrants on the dangerous Aegean Sea route, Turkey and the European Union signed an agreement in 2016 that stipulates that Greece is to send migrants held on its Aegean islands back to Turkey. In return, Turkey is to send Syrian migrants it hosts to various European Union countries.

According to the deal, Turkey was promised a total of 6 billion euros ($6.6 billion) in financial aid, which was initially designed to be given to the country in two stages and be used by the Turkish government to finance projects for Syrian refugees. Visa exemption for Turkish citizens traveling to the bloc was also to be provided under the agreement. Lastly, the customs union was also to be updated in accordance with the deal.

In exchange for these promises, Turkey took the responsibility of discouraging irregular migration through the Aegean Sea by taking stricter measures against human traffickers and improving the conditions of 3.7 million Syrian refugees living in Turkey. Despite significant developments in the control of migration traffic, however, the EU has not delivered on its commitments.

Late last month, Turkey announced it would no longer try to stop migrants and refugees from reaching Europe via land, although it pledged to continue to prevent boat crossings on the grounds of safety. The decision to open the border came after 34 Turkish soldiers were killed last month by forces of the Bashar Assad regime in northwestern Syria's Idlib province. The Turkish soldiers were stationed there to protect local civilians whose safety had been guaranteed as part of a 2018 deal with Russia.
Turkey already hosts nearly 4 million Syrian refugees, more than any other country in the world, and says it cannot handle another wave.