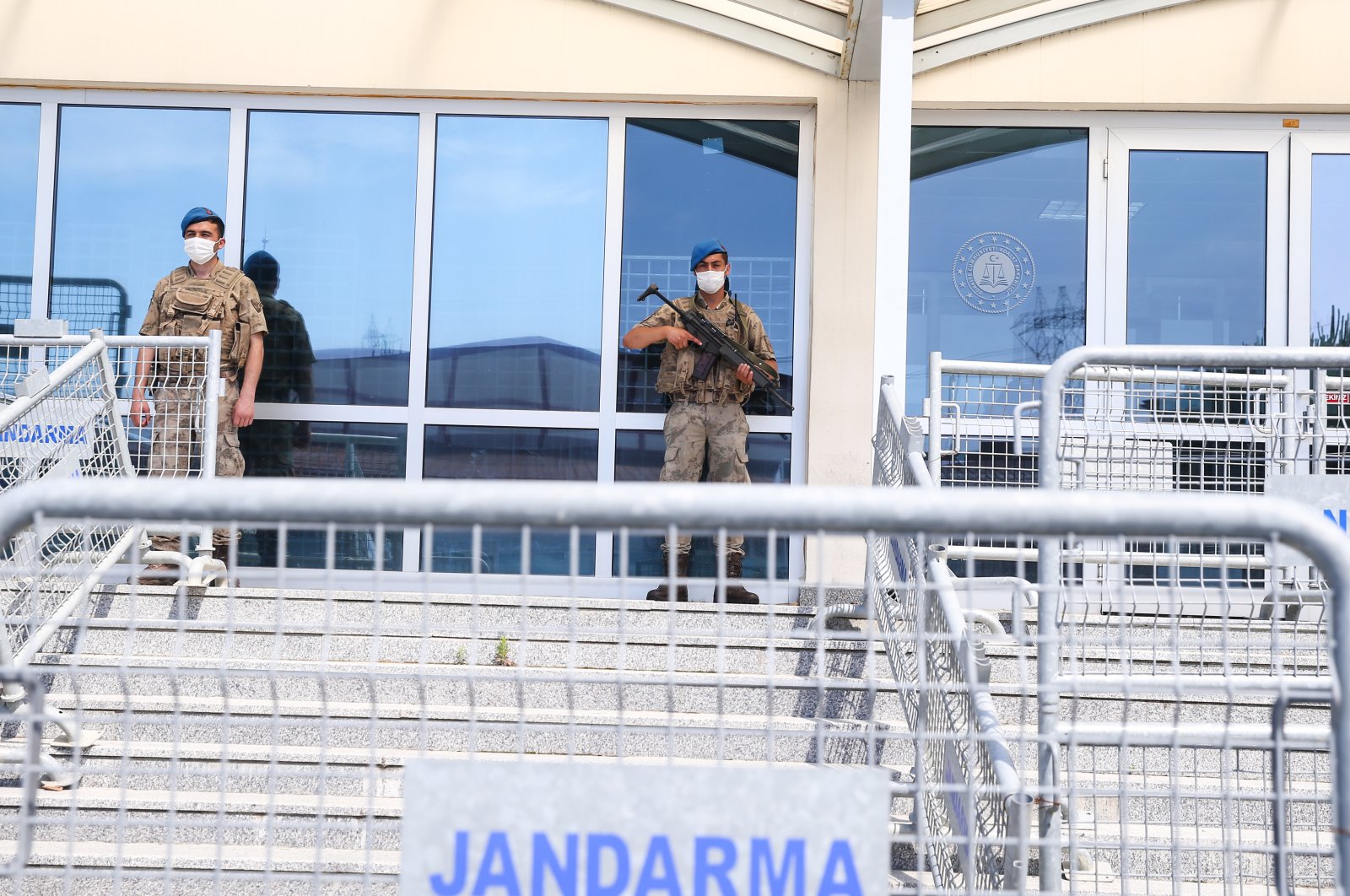 A trial of 34 defendants accused of ensnaring Turkey’s intelligence chief in a conspiracy regarded as the first known plot to topple the government by the Gülenist Terror Group (FETÖ) opened under tight security in Istanbul on Monday.

Dubbed the “MIT conspiracy” trial after the Turkish initials of the National Intelligence Directorate, the trial will delve into the group’s role in an attempt to detain MIT Director Hakan Fidan and others in 2012. The court in Silivri, where a high-security complex serving both as a prison and a courthouse campus on Istanbul’s European side, decided to close the trial to the press as it involved intelligence matters. Fourteen defendants in the case are in custody, while 15 others are still at large. Others were earlier released pending trial. The case has 32 plaintiffs, including Fidan, President Recep Tayyip Erdoğan and former ministers.

Prosecutors say it was “the first open attempt by FETÖ – whose ultimate purpose was to topple the government – against the government."

The indictment points out that the group sought to remove the head of the intelligence service through a sham investigation. Fidan and several other public officials were summoned to testify by FETÖ-linked prosecutors on Feb. 7, 2012, over allegations of MIT's ties to the terrorist group PKK. Later investigations revealed that the prosecutors and judges ultimately sought to arrest Fidan to trigger a crisis. Fidan did not go to the court to testify, upon the instructions of Erdoğan, who was prime minister at the time.
Prosecutors charged 34 suspects – including FETÖ leader Fetullah Gülen, the group's handlers for its infiltrators in the judiciary, law enforcement and MIT, former police chiefs and a journalist – with attempting to overthrow the government and running a terrorist group. The other charges in the case are obtaining confidential documents for political or military espionage and forgery of official documents. Overall, the charges carry prison terms from aggravated life imprisonment to sentences between 26 years and 53 years.
"It is clear that FETÖ engaged in a power struggle with the government and the first stage of its efforts for their ultimate goal (to topple the government) included the Ergenekon, Balyoz and Poyrazköy (trials), military espionage, the Tahşiye and Selam-Tevhid (cases), MIT trucks and the Dec. 17-25 cases," the indictment says, referring to a series of investigations and trials launched by FETÖ-linked prosecutors, police chiefs and judges. All were found to be based on forged evidence and were attempts to stifle FETÖ's critics or imprison anyone the terrorist group viewed as an obstacle to their pursuit of gaining clout. The MIT plot sought to speed up this process, prosecutors say. "This is, as a matter of fact, FETÖ's first attempt to overthrow the elected government of the Republic of Turkey," the indictment says. By arresting Fidan, the plotters would eventually implicate the prime minister in the case and force him to resign, prosecutors say.
Istanbul's specially authorized prosecutors, Sadrettin Sarıkaya and Bilal Bayraktar, who were later revealed to be members of FETÖ, had issued a court summons for Fidan for his supposed collaboration with the PKK, a few months after a tape supposedly containing MIT's talks with the PKK surfaced. However, Fidan and the other public officials involved in the case did not cooperate with the prosecutor's orders after being instructed by the then-prime minister, President Erdoğan – who had planned to have surgery on the court day but postponed it due to the incident – not to follow the issued order. At the time, the ruling government had harshly criticized the prosecutor's move, later dismissing him from the case. Sarıkaya later fled the country on Sept. 27, 2015, while under investigation as part of a FETÖ-linked case. He was caught in Istanbul two years later. Bayraktar remains at large. After the incident, a law was passed that stipulated MIT officials could only be investigated upon the permission of the prime minister.

The indictment also sheds light on details of the conspiracy, including how FETÖ-linked judiciary members manipulated the case of plaintiff Mustafa Özer. Özer, who was later revealed to be employed by MIT, was a journalist who contacted top PKK members and worked as an informant for the intelligence agency. His house was searched upon the order of Bayraktar, and he was briefly detained. FETÖ-linked judges issued an order to wiretap his phone, and despite the secrecy on the case, his name and work were openly published on the website of Taraf, a now-defunct newspaper with intimate ties to FETÖ. Prosecutors say FETÖ members sought to portray MIT as an organization collaborating with the PKK with the double purpose of defaming the government and removing top MIT executives to replace them with their own infiltrators. The terrorist group's infiltrators in the judiciary knew the prime minister was scheduled to have surgery and would, as a result, be unable to intervene in the process, deliberately choosing Feb. 7 as the date to summon Fidan and others.

Leaked audio recordings of talks between MIT officials and PKK members, known as the "Oslo talks," hit headlines shortly before the attempt to arrest Fidan. The talks were originally part of the government's efforts collectively known as the "reconciliation process," a bid to end PKK violence. However, the leaked tapes ended up being fodder for anti-government propaganda, with FETÖ-linked media outlets claiming a collaboration between the PKK and the government. The indictment says hard drives containing audio recordings were "planted" by FETÖ-linked police officers at the offices of a political party with ties to the PKK and were "found" in a raid on the said place on Jan. 13, 2012.
The indictment traces back a plot to remove Fidan in his first days in the post and refers to "Israel's disappointment over the assignment of Fidan as the new head of the intelligence service," implying that FETÖ served the purposes of Israel.
Prosecutors say that the terrorist group, or rather its infiltrators in law enforcement and the judiciary, resorted to a series of crimes to build a case against Fidan and others, including arranging "secret" witnesses who were people fed up with false information issued by prosecutors concocting crimes.
About one year after the MIT incident, FETÖ used its members in the judiciary to open a corruption investigation into some members of the Cabinet. Prosecutors Zekeriya Öz and Celal Kara, now wanted for being members of FETÖ, created a list of names for prosecution, including Erdoğan's son Bilal Erdoğan. The aim was to establish a corruption link through Bilal Erdoğan with forged evidence that would then be linked to his father. This attempt was also unsuccessful, as the police did not follow the prosecutor's orders. After this incident, which the government considered to be a breaking point, efforts to stop FETÖ members who had infiltrated nearly all government institutions intensified. Eventually, this led to FETÖ being listed as a national security threat after the recommendation of the National Security Council (MGK).

According to the indictment, two senior FETÖ members traveled to the U.S. before the plot against Fidan was put in motion and met with Gülen to discuss plans to ensnare Fidan and others in the conspiracy. Upon their return, they held talks in the capital Ankara with Ali Rıza Tekinkaya, a senior FETÖ member who conveyed the plans to members of law enforcement loyal to the terrorist group.