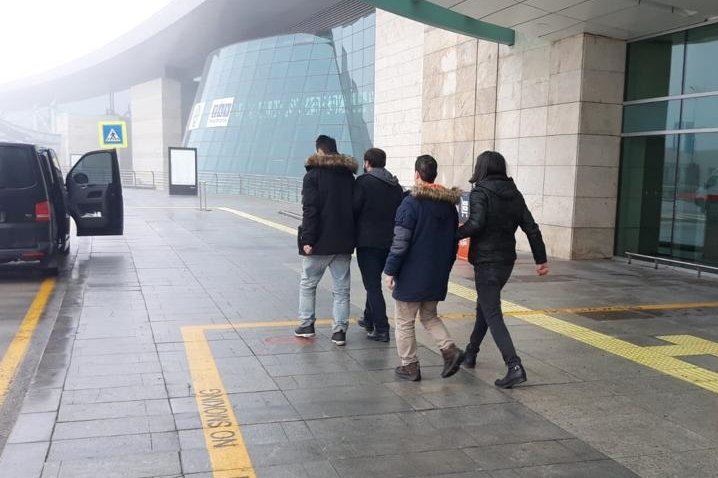 Two senior members of the Gülenist Terror Group (FETÖ), reportedly in charge of its network in two major Iraqi cities, have been extradited to Turkey from Ukraine, the Turkish Interior Ministry confirmed Wednesday.

In a statement, the ministry said Salih Fidan and Samet Güre, the FETÖ "chiefs" of Baghdad and Irbil respectively, were arrested while trying to illegally traverse the Ukraine-Poland border.

A Turkish court had issued arrest warrants for both men over their suspected membership of the organization, which was behind the July 15, 2016, coup attempt in Turkey. The suspects are currently in the capital Ankara, where they are being processed at the Chief Public Prosecutor's Office.

According to the statement, Fidan played a role in the group's overseas activities and was a teacher at a FETÖ-linked university in Iraq. Fidan fled Turkey with his wife just after the July 15 coup attempt and had not returned since, it added.

Güre, on the other hand, also actively served the terrorist group outside Turkey while working as a physics teacher at another education institution in Irbil, which also had ties to FETÖ.

The statement said Güre deposited money into his account at Bank Asya, known for its links to the organization, following an earlier coup attempt by the terrorist group in 2013 and had been named in the testimonies of former group members.

Ukraine, a close Turkish ally, allowed the extradition of more FETÖ suspects from the country in the aftermath of the 2016 coup attempt. In 2018, Yusuf Inan, a member of the terrorist group who ran websites circulating FETÖ propaganda and fled to Ukraine after the coup attempt, was brought to Turkey. In another operation, Salih Zeki Yiğit, a member of the terrorist group who collected funds for FETÖ, transferring them to senior cadres in the United States, was caught and extradited to Turkey.

Turkey launched an international legal struggle against FETÖ following the 2016 coup attempt. Despite cooperation from some allies and friendly countries, Ankara faced obstacles in the extradition of a large number of FETÖ suspects. The U.S. stands out in particular, as Gülen lives in a retreat in Saylorsburg, Pennsylvania. Turkey has issued multiple extradition requests to the U.S. for Gülen, but despite close relations between the two countries, the requests have fallen on deaf ears. So far, Turkey has sent seven folders full of evidence implicating Gülen in a number of criminal cases in Turkey, but Washington has failed to take steps toward extradition.

The Justice Ministry has requested the extradition of more than 800 members of the terrorist group from 105 countries, including the U.S., Germany, Romania and Belgium. More than 110 FETÖ members have so far been extradited to Turkey from 27 countries.

Turkey has seen a rise in FETÖ members trying to flee the country following the coup attempt. In Edirne, a northwestern province on the border with Greece, 1,708 FETÖ suspects were captured trying to secretly cross the border over the past 4 1/2 years. Among those captured on the border are soldiers, judges, prosecutors, teachers, police officers, academics and lawyers who were dismissed from their duties on suspicion of membership in the terrorist group with lawsuits pending against them.

Thousands of people linked to the terrorist group have been detained or arrested following the coup attempt, including those actively involved in the putsch bid and those implicated in the group's other wrongdoings. On Wednesday, two former police chiefs with pending arrest warrants for FETÖ membership were captured in an “absence house” in the capital Ankara. An "absence house" is FETÖ jargon for the safe houses set up across Turkey following the coup attempt, for those who did not flee abroad to use as hideouts.

Two men, identified by their initials A.D. and I.E., were found in an absence house in the Sincan district of the capital. I.E. was detained as he tried to jump out of the window of the fourth-floor apartment into a tree. Police also seized digital documents containing FETÖ propaganda in the raid. The apartment belonged to a former colonel who had been previously arrested for links to the terrorist group. Authorities said the two suspects managed to evade being caught by frequently changing their appearances and using fake identification. Both men were users of Bylock, an encrypted messaging app developed and used by the terrorist group to relay messages from senior cadres to lower ranks. Upon further investigation, it was revealed that their names appear on a secret database seized in another operation listing the names of FETÖ infiltrators in law enforcement.