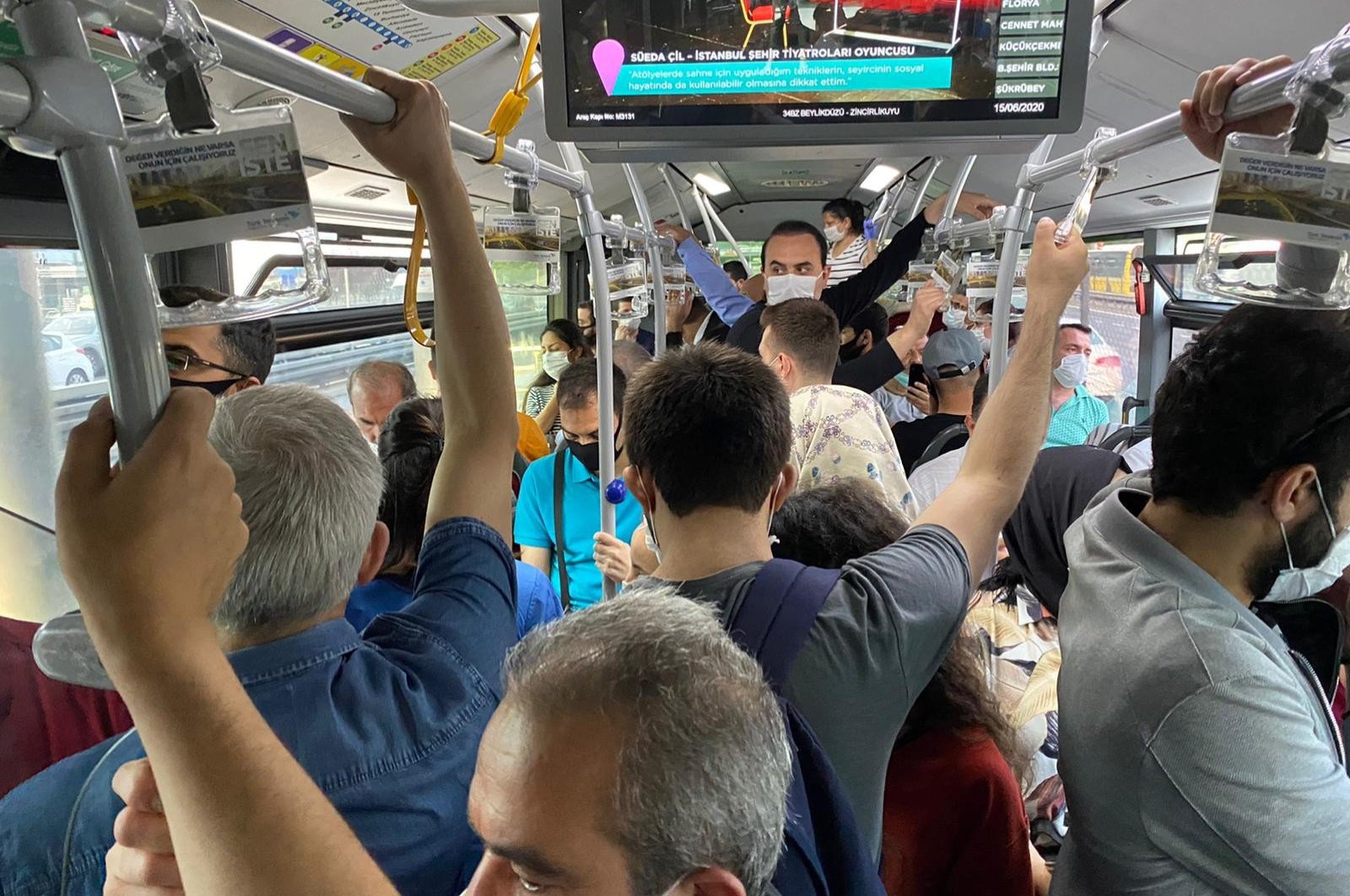 Metrobuses, a favorite means of mass transit in Istanbul, remain a health risk as overcrowding threatens the spread of coronavirus in the city which long reported the highest number of cases in the country

Istanbul, Turkey’s most crowded city with more than 15 million people, has seen its fair share of COVID-19 cases. In the densely populated city notorious for traffic jams, mass transit is a sensible choice for commuters. Yet, nowadays, it is also a potential ground for new infections. Metrobuses, exclusive-lane buses carrying thousands between the city’s European and Asian sides every day, is of particular concern. As the normalization process sees more businesses reopen, metrobuses are overcrowded again, and few comply with essential social distancing rules.

Passengers are requesting the authorities to increase the frequency of buses to prevent overcrowding, especially during the rush hour. Passengers comply with mask-wearing rules, but there is little standing room in the buses to adhere to the 1.5 meters (4.9 feet) social distancing rule. Traveling on weekdays is particularly distressing as crowds grow with more people choosing metrobus over traveling on other buses often stuck in traffic or their own cars. Metrobus stops also see huge crowds in the morning and evening with some commuters preferring to wait for emptier metrobuses to grab a seat.

Özden Düz, a passenger, says they are unable “to follow social distancing rules, unfortunately.” “Everyone tries to go to work on time, so seeing crowds here is only natural,” Düz told Demirören News Agency (DHA) on Monday. “I think what the municipality should do is putting more buses on the lane. I have to take three different rides to reach my office and in metrobus, I come across overcrowding every time,” he complained. Okan Uzun, another passenger, said it was impossible to be cautious about social distancing because of the crowd. Mesude Isaoğlu said it was very difficult to find empty seats, and she had to travel standing up for a long time before she found a seat. Ali Akça, another passenger, said some passengers also failed to observe mask-wearing rules. “Yes, it is crowded, but there is also a risk from people who improperly wear masks. Some pull them below their chin, and some fail to cover their nose,” he said.

The bus rapid transit route which stretches from far-flung Beylikdüzü on the European side to Söğütlüçeşme on the Asian side has long been working overcapacity. Inaugurated in 2007 as a swift solution to swelling number of passengers, metrobuses, operating on a 50-kilometer-long (31 miles) route are viewed as an alternative to the metro network which is expected to relieve them of the burden with the opening of more lines in the near future, especially on the city’s European side. Metrobuses carry an average of 950,000 passengers daily.

Minibusses are another challenge for city commuters. The only option on short routes and routes where buses do not operate frequently, passenger minibusses are almost always brimming with passengers despite frequent checks by police against minibusses working over their capacity.

Koca noted that the total number of patients in intensive care was 1,209, as he urged everyone to pay closer attention to taking precautions.

Health care professionals conducted over 45,232 tests for the disease since Saturday, raising the total count to over 3.9 million.

"The cities with the highest number of intubated patients are Istanbul, Şanlıurfa, Ankara, Gaziantep and Konya. Let's follow the rules to get the results we expect," Koca said on Twitter.

Since the normalization process started in June, Turkey has seen fewer drops in the number of new cases, with daily tolls mostly close to 1,000. Although there has been no major increase in the number of new cases nor deaths, with thousands of people recovering each day, the country recently accelerated efforts to bring the situation under control.